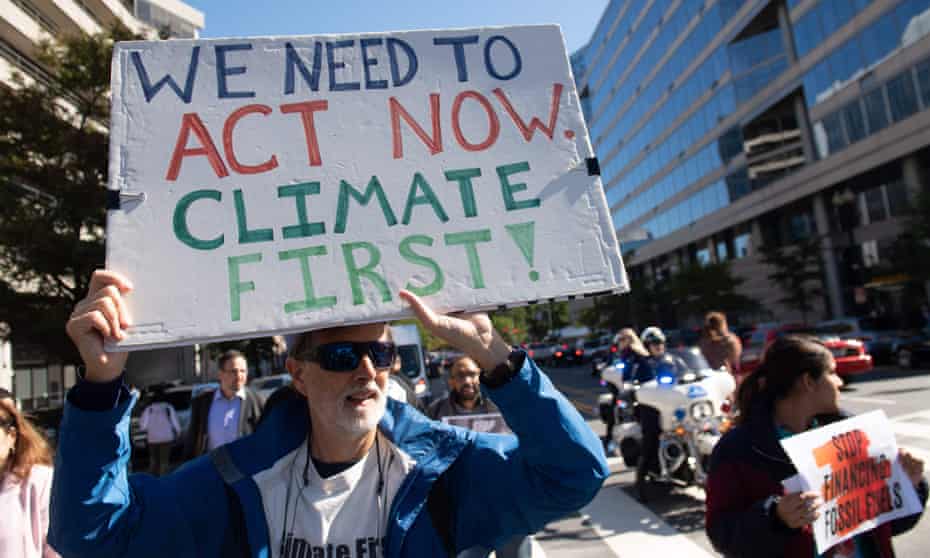 London— One of the popular global news portal from United Kingdom has given a landmark message cor climate change through an announcement.
The Guardian will no longer accept advertising from oil and gas companies, becoming the first major global news organisation to institute an outright ban on taking money from companies that extract fossil fuels, the Guragain writes.

“The Guardian will no longer accept advertising from oil and gas companies, becoming the first major global news organisation to institute an outright ban on taking money from companies that extract fossil fuels.”
A good start, who will take this further?https://t.co/csRuXWZXdG

The move, which follows efforts to reduce the company’s carbon footprint and increase reporting on the climate emergency, the Guardian states in its announcement.

The Guardian further writes in its announcement regarding the ban :

For anyone who believes the world faces an urgent climate crisis, it has been quite a year. The world’s leading scientists tell us we have just twelve years to change human behaviour to avert catastrophe. Teenage climate strikers inspire millions of people, young and old, to protest against inaction, and devastating bushfires sweep across much of Australia. This is the most important challenge of our times.

Our Guardian editorial colleagues have led the world in covering the crisis with expertise and urgency. In May 2019 our editor-in-chief Katharine Viner announced that the Guardian would shift to using more urgent language to describe the climate emergency – and other news organisations have begun to follow suit.

Guardian Media Group has always tried to lead the way commercially, too. Five years ago, GMG made the bold decision to shift the investment portfolio of the Scott Trust Endowment fund, which supports the Guardian in perpetuity, to exclude all fossil fuel investments and began a brilliant campaign to encourage others to follow suit, called Keep It In The Ground.

The result is that fossil fuel-related investments now represent less than 1% of our total funds, and many of the fund managers with whom we work say they have created new, greener investment funds as a result of that decision.

We’ve continued to take steps wherever we can. Although we are small compared to the world’s largest companies, in October 2019, we pledged to reduce the Guardian’s emissions to net zero by 2030 – and many other businesses (such as Microsoft) are making similarly ambitious commitments. We have also been certified as a B Corporation, and later this year we will publish our plans to reduce our carbon footprint towards our net zero goal.

As we’ve considered what more our organisation can do, we realise there is another step we can take, if we’re to stay true to our values.

We have decided that we will no longer accept advertising from fossil fuel extractive companies on any of the Guardian’s websites and apps, nor in the Guardian, Observer and Guardian Weekly in print. Our decision is based on the decades-long efforts by many in that industry to prevent meaningful climate action by governments around the world.

Of course we know some readers would like us to go further, banning ads for any product with a significant carbon footprint, such as cars or holidays. Stopping those ads would be a severe financial blow, and might force us to make significant cuts to Guardian and Observer journalism around the world.

Advertising has always been a vital part of how we support Guardian journalism – it made up roughly 40% of our revenues last year – and we hope to continue working with advertisers to keep our journalism open to all. A high quality digital advert which reaches millions of Guardian readers on their laptop or phone is every bit as valuable to selling a product as the classified print adverts featured on our first front page were, 199 years ago.

We believe that good advertising, done responsibly, can be a positive for the economy and the world, as well as providing an important way of sustaining the Guardian’s journalism. So we will continue to accept other forms of advertising as we continue to seek long-term financial sustainability for the Guardian.

As most Guardian readers know, funding for high quality news remains in crisis. Sales of print newspapers continue to decline, and the dominance of gigantic digital platforms which absorb the vast majority of advertising spend on the web makes it harder for publishers to be rewarded for the journalism they produce.

We have made huge efforts to rebalance the Guardian’s finances over the past four years, and thanks to the generosity and support of readers – and advertisers – we have begun to restore the Guardian to a healthier financial state.

The truth is that we will continue to rely on both types of support for many years to come as high quality media continues to be battered on many sides, both financially and politically, around the world.

The advertising landscape is shifting fast, and many businesses and advertisers are waking up to the climate crisis themselves. We believe many brands will agree with our stance, and might be persuaded to choose to work with us more as a result. The future of advertising lies in building trust with consumers, and demonstrating a real commitment to values and purpose.

The funding model for the Guardian – like most high quality media companies – is going to remain precarious over the next few years and we’ll be more reliant than ever on the support of our readers. It’s true that rejecting some adverts might make our lives a tiny bit tougher in the very short term. Nonetheless, we believe building a more purposeful organisation and remaining financially sustainable have to go hand in hand.

… we’re asking readers, like you, to make a new year contribution in support of the Guardian’s open, independent journalism. This has been a turbulent decade across the world – protest, populism, mass migration and the escalating climate crisis. The Guardian has been in every corner of the globe, reporting with tenacity, rigour and authority on the most critical events of our lifetimes. At a time when factual information is both scarcer and more essential than ever, we believe that each of us deserves access to accurate reporting with integrity at its heart.

More people than ever before are reading and supporting our journalism, in more than 180 countries around the world. And this is only possible because we made a different choice: to keep our reporting open for all, regardless of where they live or what they can afford to pay.

We have upheld our editorial independence in the face of the disintegration of traditional media – with social platforms giving rise to misinformation, the seemingly unstoppable rise of big tech and independent voices being squashed by commercial ownership. The Guardian’s independence means we can set our own agenda and voice our own opinions. Our journalism is free from commercial and political bias – never influenced by billionaire owners or shareholders. This makes us different. It means we can challenge the powerful without fear and give a voice to those less heard.

None of this would have been attainable without our readers’ generosity – your financial support has meant we can keep investigating, disentangling and interrogating. It has protected our independence, which has never been so critical. We are so grateful.

As we enter a new decade, we need your support so we can keep delivering quality journalism that’s open and independent. And that is here for the long term. Every reader contribution, however big or small, is so valuable.