Is this Indian villager faster than Usain Bolt? 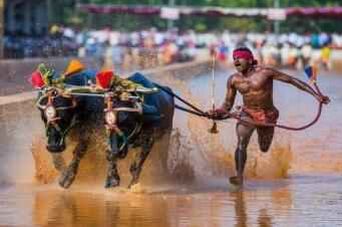 A Karnataka villager and Kambala jockey has become an overnight sensation after he ran the traditional buffalo race, covering 142.50 meters in just 13.62 seconds, www.news18.com reported.

The timing was enough to make 28-year-old Srinivasa Gowda the fastest runner in the history of the traditional sport of the coastal region, breaking a 30-year-old record. It also led to comparisons with Bolt’s world record sprint of 100 meters in just 9.58 seconds, the report said.

Although the records cannot be directly compared, since the Kambala jockey was running alongside a pair of buffaloes and the speed generated was also by the animals. But the race was run in a slushy field, which can only be a speed deterrent, the news report said.

Even without the comparisons, Gowda’s feat is remarkable on its own.

“I urge the Athletics Association of India to take this man under their wing & make an Olympic champion of him. Wonder how many hidden talents we have!,” tweeted veteran MP and Indian Congress leader Shashi Tharoor.

Faster Than Usain Bolt? Karnataka Man Running With Buffaloes Covers 100 Metres in Just 9.55 Seconds. I urge the Athletics Association of India to take this man under their wing & make an Olympic champion of him. Wonder how many hidden talents we have! https://t.co/G7jPE2zIng

Kambala is an ancient, traditional Buffalo race in muddy or slushy paddy fields of Mangalore and Udupi regions of Karnataka, India.

Many villages organise Kambala in which dozens of enthusiastic youth participate with their best trained buffaloes.

After his run made him an overnight sensation, a smiling and shy Gowda told media that he was surprised by the amazing response he is getting.

“I love Kambala. The credit of my success should also go to my two buffalos. They ran very well. I chased them or drove them”, he said.

His unbelievable feat has set the internet on fire. Several thousand people across the globe have shared it on Twitter and Facebook.

Under pressure from some animal rights activists, Kambala was banned a few years ago as it involves the jockeys whipping buffaloes to make them run faster.

However, then Congress government in Karnataka passed a special legislation allowing it, the news report said