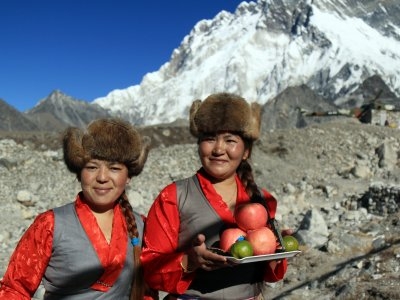 Nepal is no stranger to the threats of nature. The impacts of the devastating earthquake in 2015 still ripple through the country today, as the 900,0000-some people who lost their homes continue to rebuild their lives. With the average global temperatures on an upward trajectory, other threats come sharply into focus. The Himalayas is home to a plethora of glaciers and frozen lakes, which are steadily melting due to climate change. It is estimated that a glacial lake outburst from Imja Lakealone could affect up to half a million people.

The government of Nepal has prioritized adaptation planning to better preparation for such events, as well as life on a warmer planet through the formulation of its National Adaptation Plan (NAP) with support from UN Environment and on the agriculture with the support of UNDP and FAO. During the Gobeshona conference in Bangladesh, we met with Ajay Mathema – from the School of Environmental Science and Management at the Pokhara University in Nepal. Mr. Mathema has been following the NAP process since 2015, particularly for generation of knowledge and research. We spoke with Mr. Mathema to discuss how Nepal’s NAP experience is progressing and the role universities are playing in its development.

The NAPs process started in Nepal in 2015 and established two working groups; one team to produce reports and a second team to review and incorporate the findings into their policies. Both teams are coordinated by the Ministry of Environment, along with 11 other ministries. In 2017, the teams produced a number of outputs such as a vulnerability assessment framework, climate scenario studies, indicators and technical reports. Currently Nepal is trying to coordinate around all line ministries, which have currently been slowed down. The restructuring still needs to settle before there is a clear path for integration.

Which partners are critical partners in the Nepal’s NAP process?

Nepal’s NAP process has a unique feature that emphasizes inclusiveness, to ensure no one sector is left behind. A critical partner that is often overseen is the academia sector. Universities in Nepal have been working on climate change for over 25 years and while governments sometimes hire university faculties as consultants, going further and engaging the whole university has massive benefits for capacity development. In 1999, the Pokhara University in Nepal had been building capacity of the ministries. During this period, we had conducted trainings and projects in the field. One of the challenges identified by government in their report on NAPs is they want to transfer the NAP process from the national level to the sub-national level and universities can play a leading role in this; ensuring capacity is sustained and maintained in the long-term.

How can universities shape national policies on climate change?

Much of NAPs process is built around policy work that started in 2015. In order to convert policy into action, it needs to be deployed at the local level. Providing municipalities with support, sensitization of politically elected people and building capacity at all levels is a role that universities can play.

What role do you think students and researchers can play in locally led climate action?

The Pokhara University is part of the Least Developed Countries Universities Consortium on Climate Change (LUCCC) and formulated a student club that organized an international programme and panel discussion at COP25. This inspired students to promote climate-friendly products in their own lives, such as supporting the use of electric motorbikes. Universities are also essential to filling roles within government ministries. Since 2002, the Pokhara University has produced around 50 environment graduates a year, 50 percent of whom go on to work for the government.

Climate action needs to start at the grassroots level, but there is a bottleneck: researchers and policy makers don’t speak the same language as grassroots organizations. We like to present our data in graphs and tables, with fancy academic language, which often isn’t necessarily the best way to explain concepts to local stakeholders. We need to get better at communicating with our local bodies and project beneficiaries; a role the universities take the lead on.

What are the entry points for leveraging finance for locally led climate action?

When it comes to finance, local bodies and municipalities are actually quite powerful in Nepal as they have autonomy over deriving revenues from their own resources (mines, etc.). The local governments can submit funding proposals for provincial and national level for funding as well. Of course, foreign aid through grants or loans is provided at the federal level. For better-coordinated projects, the provincial level can start building the case to work with development partners and use locally sourced human resources to achieve locally led climate action.

At the Gobeshona conference, the Global Commission for Adaptation launched the Locally Led Action Track which UNDP is a key supporter of. Hearing about the concrete steps Nepal is taking to ensure adaptation planning is locally led can act as an inspiration to other countries and through close collaboration between governments and universities, the flow of information between policymakers and project beneficiaries can stay fluid and grass roots climate action can be empowered. The NAP Global Support Programme is a joint programme by UN Environment and the UN Development Programme, funded by the Global Environment Facility.