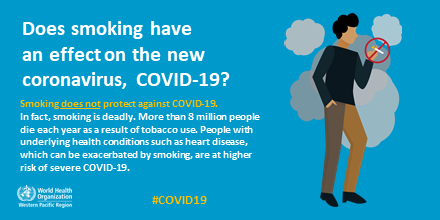 A WORLD-renowned lung disease expert says that smokers should quit the habit and that tobacco companies should stop producing cigarettes, to help cut health risks increased by the coronavirus pandemic.

Dr. Gan Quan, a director at the International Union Against Tuberculosis and Lung Disease, said: “The best thing the tobacco industry can do to fight Covid-19 is to immediately stop producing, marketing and selling tobacco.”

They said that they are very worried about the impact of coronavirus on smokers, especially in poorer countries with inferior health services.

Smoking is known to weaken the immune system, making it less able to respond effectively to infections.

Smokers may also already have lung disease or reduced lung capacity which would greatly increase the risk of serious illness.

Quan said governments around the world had a “moral imperative” to advise smokers to stop.

“This is the absolute best time to quit smoking,” Quan pleaded.

The Union also quoted new evidence taken from studies of coronavirus patents in China and in other countries, which suggests that smokers may become more severely ill if they get the virus.

A “history of smoking” was among the factors which were identified by the study which took place between December 30 last year and January 15, The Sun writes.

Age, maximum body temperature on admission and respiratory failure were among other notable factors, according to the study, which was published in the Chinese Medical Journal.

These results “can be used to further enhance the ability of management of Covid-19 pneumonia”, it concluded.

The first two patients to die at Jinyintan Hospital in Wuhan, detailed in the Lancet Medical journal, were both long-term smokers.

Researchers from China and the US carried out an analysis of the first 8,000 cases of coronavirus.

They found that men were more likely to be diagnosed with the disease and suffer severe symptoms, including pneumonia.

Their findings also revealed that the survival rates between males and females were markedly different.

In the first six weeks of the outbreak 1.7 per cent of women died compared with 2.8 per cent of men.

Experts believe there are a few reasons for this discrepancy, including some biological and other lifestyle choices, such as smoking.

In China, men are much more likely to smoke than women, which can lead to a weaker immune system.

In fact China has the largest population of smokers in the world – accounting for nearly a third of the world’s smokers – but just two per cent of them are women.