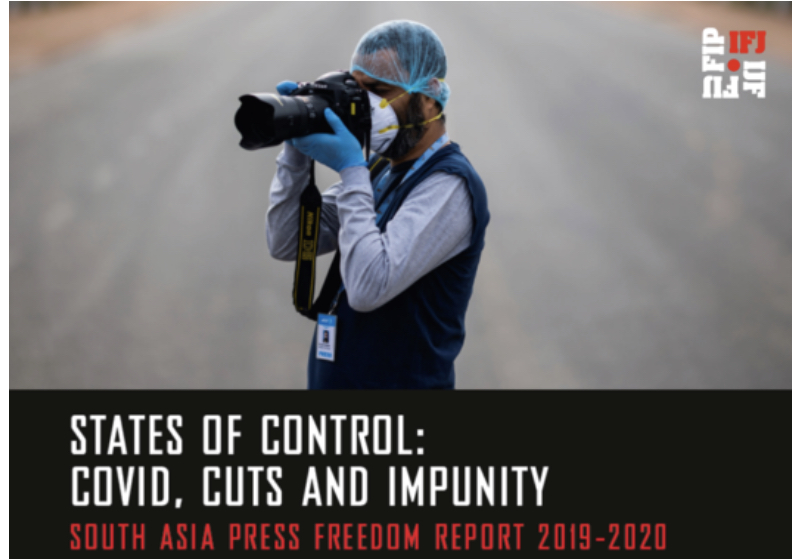 London— The International Federation of Journalists (IFJ) has said increased controls during the Covid-19 pandemic has highlighted the existing inequalities and poor working conditions that exist for journalists in South Asia.

In its 18th edition of the South Asia Press Freedom Report, the IFJ said that during 2019-20, in India and Bangladesh, journalists came under fire while covering civil disturbances and protests. In Sri Lanka and Afghanistan, the fight for safe access to information continued amid tumultuous elections. In Nepal and Pakistan, the battle against a heavy legislative hand was waged. While in Bhutan and the Maldives, the challenge for survival of a small but critical media was never so great.

Plummeting media revenues saw the mass shedding of more than 3,000 journalist jobs in Pakistan too, while harsh online controls saw Kashmir take the mantle for the world’s longest communication shutdown in a democracy, the report said.

In the period under review, the IFJ and its affiliates documented 219 violations against the media. This includes 52 jailings or detentions, 90 threats to the lives of journalists, 65 non-fatal attacks, 35 threats against media institutions, 8 gender-based attacks and 82 threats or attacks on rural, regional or minority journalists.

However, as the report shows, amid Covid-19, cuts and controls, South Asia’s media and the unions and networks that defend it continue persevering, standing together in solidarity to disrupt authoritarian narratives.

“The media had the task of reporting the growing humanitarian crisis, working in difficult circumstances and amidst unprecedented physical curbs due to lockdowns and restrictions, particularly in containment zones. The Covid-19 crisis has exacerbated existing fault lines in the precarious freedoms that the South Asian media has fought for and the most vulnerable are now taking the first beating,”the IFJ said.

The full report can be accessed here: