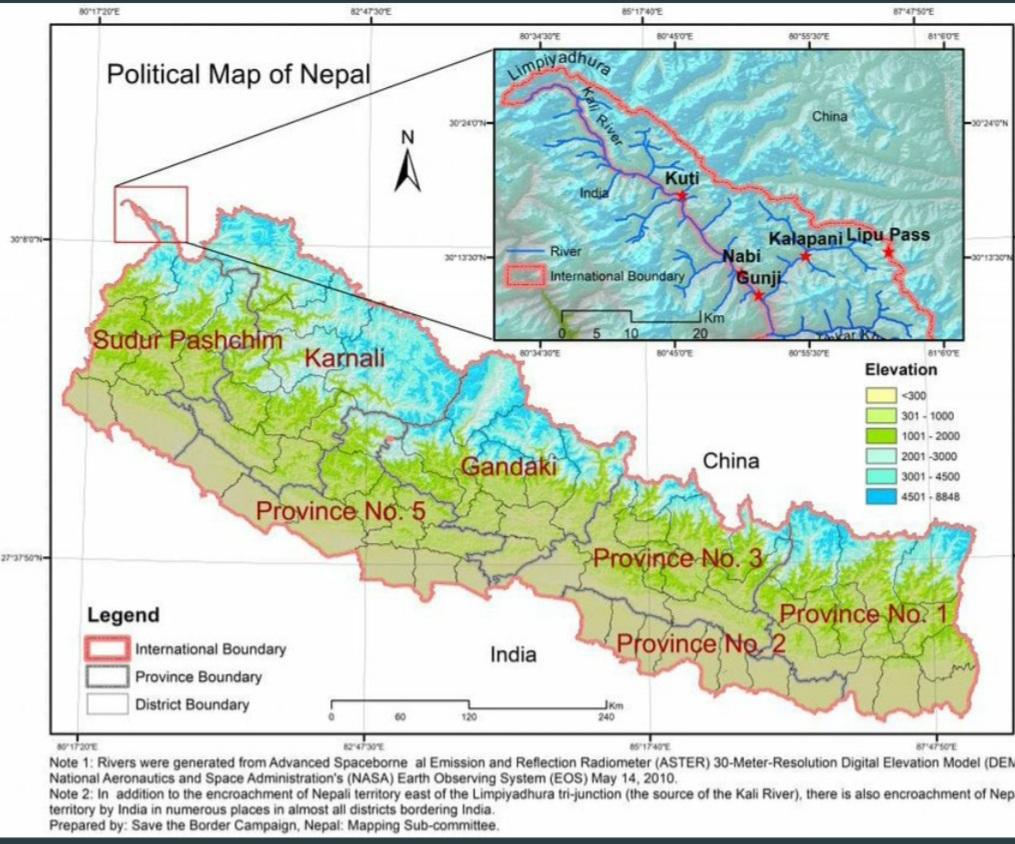 Kathmandu, May 18: The meeting of the Council of Ministers held today at the Prime Minister’s official residence, Baluwatar, has approved new political map of Nepal which includes Kalapani and Limpiyadhura area in the far western region.

“The updated political map proposed by Ministry of Land Management, Cooperatives and Poverty Alleviation has been approved by the government,”  said Dr Yubaraj Khatiwada, spokesperson of the government and Minister for Finance, Communications and Information Technology, at a press briefing after the Cabinet meeting, The national daily Rising Nepal writes.

He said that the updated political map also includes provincial and local levels as per the federal system of the country.

The government had decided to issue a new political map after India ‘inaugurated’ the link road to China which passes through Nepali territory in Lipu lekh and Limpiyadhura.

The territories are disputed between India and Nepal. Last year, New Delhi published a new map that showed Kalapani within its borders, a move protested by Kathmandu.India and Nepal share a 1,800km (1,118-mile) open border. Nepal said it has “consistently maintained” that as per the Sugauli Treaty (1816), “all the territories east of Kali (Mahakali) river, including Limpiyadhura, Kalapani and Lipu Lekh, belong to Nepal.”The Lipulekh Pass is claimed by Nepal based on the 1816 Treaty of Sugauli it entered with the British colonial rulers to define its western border with India.Kathmandu also claims the highly strategic areas of Limpiyadhura and Kalapani, although Indian troops have been deployed there since New Delhi fought a war with China in 1962.After a new road was inaugurated on May 8 by Defence Minister Rajnath Singh connecting the Lipulekh pass in Uttarakhand with Kailash Mansarovar route in China, Nepal has protested against it and is also considering putting up a security post in the area.Following a strong objection from Nepal, India’s Ministry of External Affairs (MEA) had said the road going through Uttarakhand’s Pithoragarh district “lies completely within the territory of India”.“We have seen the press release dated May 9, 2020, issued by the Ministry of Foreign Affairs of Nepal pertaining to the inauguration of a road in India. The recently inaugurated road section in Pithoragarh district in the State of Uttarakhand lies completely within the territory of India,” the MEA said in a statement.“The road follows the pre-existing route used by the pilgrims of the Kailash Mansarovar Yatra. Under the present project, the same road has been made pliable for the ease and convenience of pilgrims, locals and traders,” said the MEA.

The MEA also said that the boundary delineation exercise with Nepal is ongoing and India is committed to resolving outstanding boundary issues through diplomatic dialogue and in the spirit of our close and friendly bilateral relations with Nepal, ANI writes.