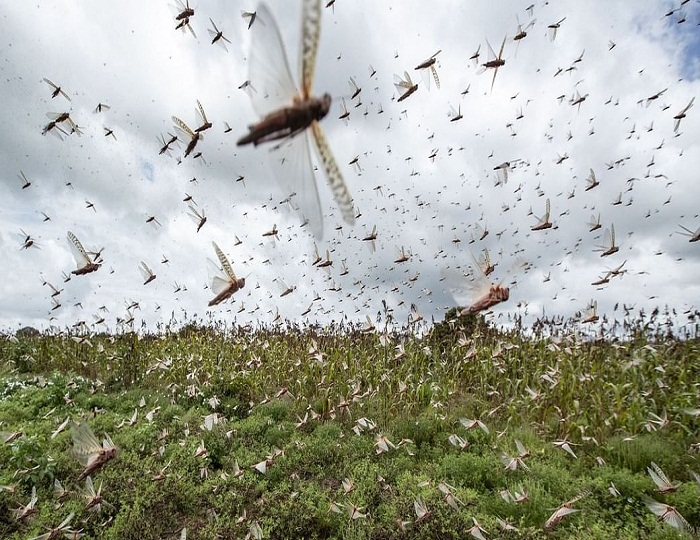 TPT, Pakistan  — Amid the coronavirus pandemic crisis, another crisis that will impact the food security is staring at Pakistan and India. Swarms of Locusts- shorthanded grasshoppers have invaded agriculture fields in both countries affecting crops and risking famine in the region. For more than 25 years, Locust swarms are threatened for India and Pakistan’s breadbasket region.

The locusts are believed to be entered from neighboring Iran into Southern Baluchistan provinces. These insects originate from desserts and can eat barks, flowers, seeds, etc. and travel with a speed of 149km a day.

Pakistan is been hit by the swarms in the winters and fresh swarms are expected to grow until mid-summer.Pakistan Government has approved the National Action Plan for Locust control and airborne spraying of some 300,000 liters of insecticide has been done.

The threat is for the farmers and the poor rural communities which is already been hit by the virus.

The innovative pilot project in Pakistan Okara district offering solutions to problems in which the farmers can earn money by trapping Locusts, which are turned into high protein chicken feed by animal feed mills. It was the idea of Muhammad Khurshid, a civil servant in National food security and research and Johar Ali, biotechnologist from Pakistan Agriculture Research Council.

Muhammad said the idea came from Yemen in May 2019, the motto in a war-torn country facing the famine was, “Eat locusts before they eat the crop.”

They set up three days trial. They used the slogan “catch Locusts. Earn money. Save crops” and pay farmers PKR 20/kg of Locusts. The project team weighs the locusts and sold them to plant making chicken feed. “On the first day 10-15 people showed interest but on the third-day hundreds of people come with their bags, we just have to weigh their bags and pay them for their efforts”-said Ali.

Pakistan imports 300000 tons of soybeans, after extracting oil used the crush for animal feed. Soybean has 45% protein and Locusts have 70% protein. Soybean meal is 90 Pakistani rupee/kg, whereas Locusts are free-the the only cost is of capturing and drying them so they can be sold”- says Muhammad Athar, General Manager Hi-Tech Feeds.

He further said -After the pilot study, move to scale up project was put on hold due to the coronavirus but now lockdown has eased it can be started again.

Khan says- “It’s a good idea- the only problem is buying mechanism and advised to rely on chemical sprays in largely deserted areas as he expects swarms to carry on multiplying.”

Mohammad said as massive locusts are expected local communities should be encouraged and the government should support and encourage poultry and animal mal enterprise to buy locust and stop spraying in community-based areas as the collection is possible.

Mass netting and development and the use of natural pesticides should be done. This strategy used by Pakistan may be used by India as some locust activities seen in western Rajasthan, Maharashtra, and Gujarat, the locusts are heading towards Delhi in large numbers.

Swarms of Locusts- shorthanded grasshoppers have invaded agriculture fields in both countries affecting crops and risking famine in the region. For more than 25 years, Locust swarms are threatened for India and Pakistan’s breadbasket region.