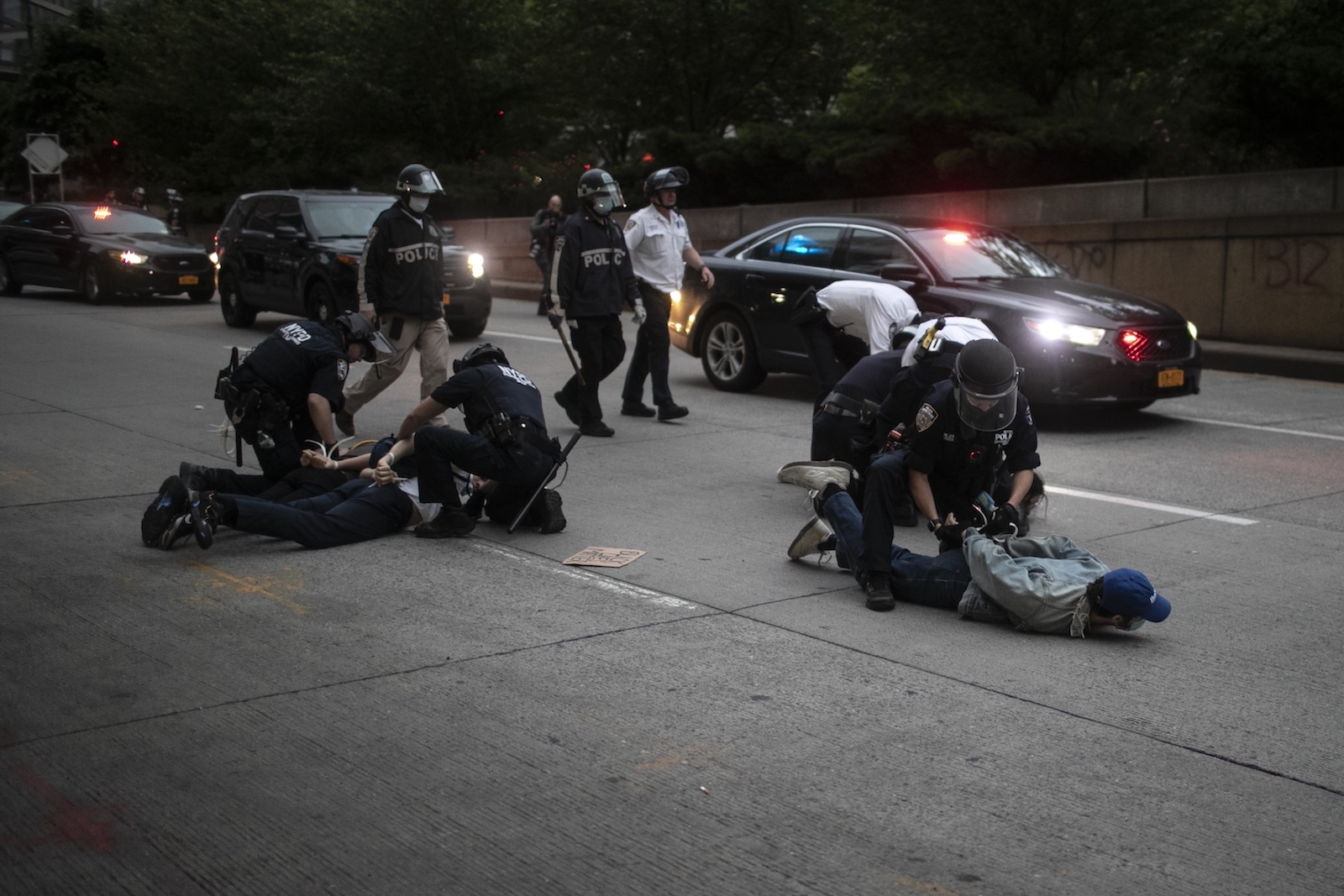 REUTERS , WASHINGTON/MINNEAPOLIS — Tens of thousands of people took to the streets of U.S. cities on Tuesday for an eighth consecutive night of protests over the death of a black man in police custody, clashing with police and looting stores in New York City.

Large marches and rallies also took place in Los Angeles, Philadelphia, Atlanta and Seattle. In Washington, D.C., protests were held near the park where demonstrators were cleared out by police on Monday to make a path for President Donald Trump so he could walk from the White House to a historic church for a photo.

Meanwhile, the Pentagon has moved about 1,600 U.S. Army troops into the Washington, D.C., region, after several nights of violent protests in the city.

“Active duty elements are postured on military bases in the National Capitol Region but are not in Washington, D.C.,” Pentagon spokesman Jonathan Rath Hoffman said in a statement.

He said the troops were on “heightened alert status” but”are not participating in defense support to civil authority operations.”

Senior defense officials had said on Monday that units would be moving into the Washington region.

The troops include military police and those with engineering capabilities, along with an infantry battalion, Hoffman said.(

Although rallies on behalf of Floyd and other victims of police brutality have been largely peaceful during the day, after dark each night crowds have turned to rioting, vandalism, arson and looting. On Monday night, five police officers were hit by gunfire in two cities.

Outside the U.S. Capitol building on Tuesday afternoon a throng took to one knee, chanting “silence is violence” and “no justice, no peace,” as officers faced them just before the government-imposed curfew.

The crowd remained in Lafayette park and elsewhere in the capitol after dark, despite the curfew and vows by Trump to crack down on what he has called lawlessness by “hoodlums” and”thugs,” using National Guard or even the U.S. military if necessary.

Dozens of National Guard troops lined up on the steps of the Lincoln Memorial behind black crowd-control barriers.

In New York City, thousands of chanting and cheering protesters ignored an 8 p.m. curfew to march from the Barclays Center in Flatbush toward the Brooklyn Bridge as police helicopters whirred overheard.

The crowd, halted at an entrance to the Manhattan Bridge roadway, chanted at riot police: “Walk with us! Walk with us.”

On Hollywood Boulevard in Los Angeles, hundreds of people filled the street from curb to curb, marching past famous landmarks of the film center. Others gathered outside Los Angeles Police Department headquarters downtown, in some cases hugging and shaking hands with a line of officers outside.

Los Angeles was the scene of violent riots in the spring of 1992, following the acquittal of four policemen charged in the beating of black motorist Rodney King, that saw more than 60 people killed and an estimated $1 billion in damage.

Hundreds of protesters also gathered in Denver and Seattle but remained peaceful as darkness fell in the West. A Reuters/Ipsos poll released on Tuesday found a majority of Americans sympathize with the protests.

The survey conducted on Monday and Tuesday found 64% of American adults were “sympathetic to people who are out protesting right now,” while 27% said they were not and 9% were unsure.

More than 55% of Americans said they disapproved of Trump’s handling of the protests, including 40% who “strongly” disapproved, while just one-third said they approved – lower than his overall job approval of 39%, the poll showed.

In Minneapolis, Roxie Washington, mother of Floyd’s 6-year-old daughter, Gianna, told a news conference he was a good man. “I want everybody to know that this is what those officers took from me….,” she said, sobbing. “Gianna does not have a father. He will never see her grow up, graduate.”

Floyd died after a white policeman pinned his neck under a knee for nearly nine minutes in Minneapolis on May 25, reigniting the explosive issue of police brutality against African Americans five months before the November presidential election.

The officer who knelt on Floyd, 44-year-old Derek Chauvin, has been charged with third-degree murder and second-degree manslaughter. Three other officers involved were fired but not yet charged.

‘AMERICA IS NOT A BATTLEGROUND’

Trump has threatened to use the military to battle violence that has erupted nightly, often after a day of peaceful protests. He has derided local authorities, including state governors, for their response to the disturbances.

The head of the U.S. National Guard said on Tuesday 18,000 Guard members were assisting local law enforcement in 29 states.

Trump’s militaristic rhetoric and the growing role of the U.S. armed forces has alarmed some current and former officials.

“America is not a battleground. Our fellow citizens are not the enemy,” Martin Dempsey, a retired four-star general who served as chairman of the Joint Chiefs of Staff, wrote on Twitter.

The protests come on the heels of lockdowns to prevent spread of the novel coronavirus which hit African Americans disproportionately with high numbers of cases and job losses.

Some of those who have gathered at the site of Floyd’s killing have invoked the non-violent message of the late U.S. civil rights leader Martin Luther King Jr., assassinated in 1968, as the only way forward.

“He would be truly appalled by the violence because he gave his life for this stuff,” said Al Clark, 62, a black man who drove to the Minneapolis memorial with one of King’s speeches blaring from his truck. “But I can understand the frustration and anger.”