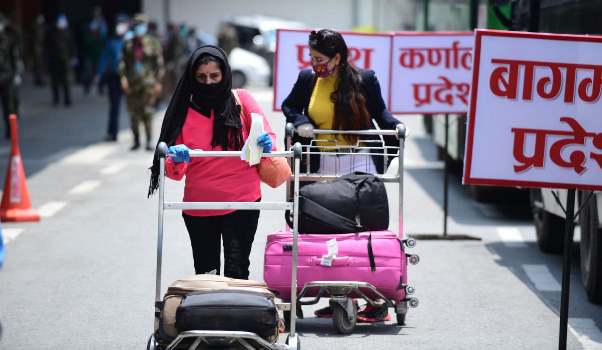 RSS, London —  The Non Resident Nepali Association (NRNA) has said more than 500 Nepali nationals stranded in various countries due to the lockdown have been rescued as of Thursday.

President of NRNA Kumar Panta said 299 Nepalis have returned home Nepal from Kuwait with the support of the Kuwait government. He added that preparations are being made to send more 2,991 Nepalis at the holding camp in Kuwait operating two flights a day for them.
They Nepalis were repatriated home from Kuwait at the coordination of the NRNA Kuwait and the Nepali Embassy.
NRNA stated that so far 511 people have been repatriated to Nepal of late including 26 from Myanmar, 168 from Dubai, 11 from Australia, seven from Japan and 299 from Kuwait.
According to NRNA president Panta, the NRNA International Coordination

Council had provided 6,000 US Dollars to its national coordination committee Kuwait and UAE for assisting the Nepalis including women and children who are facing greater hardship abroad due to the lockdown various countries have imposed to prevent spread of coronavirus.

Panta has urged the government to take initiatives at the earliest for the rescue of the remaining Nepalis abroad.
A total 50 thousand 93 Nepalis in various countries had applied for returning home to Nepal, but the Ministry of Foreign Affairs has recommended to repatriate only 24 thousand 148 of them on priority basis by chartered flight.
Around 20 thousand Nepalis are said to be waiting to be rescued in the first phase from Malaysia and the countries in the Gulf region alone.

NRNA treasurer Mahesh Shrestha said the NRNA has provided around seven million rupees to its national coordination committees in 11 countries, which have been much affected by COVID-19, for rescuing the stranded Nepalis.