George Floyd- a murder that shook the world 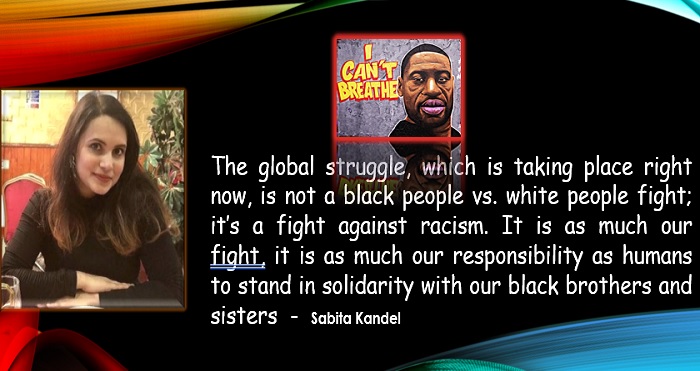 On the 26th of May, states across the USA erupted into protests following the murder of George Floyd in Minneapolis. The brutal footage of yet another black man being murdered in ‘the land of the free’ by yet another white police officer is far from the American Dream. This brutal incident shook the world. The rage and tears were shared by millions as multiple countries protested in solidarity with the Black Lives Matter (BLM) movement, against racial injustice, police brutality and the lack of accountability. Sadly, this is not an isolated incident; police brutality is an insidious poison, which has plagued America for centuries. Such vile and racist acts against black people do not happen in a vacuum, they are a natural product of a system, which has vilified black people from the start. This is the product of a systemic and institutional racism that black people face on a daily basis. The protests are for George Floyd, Tamir Rice, Yvonne Smallwood, Tanisha Anderson, Sandra Bland, Oscar Grant, Keith Scott, Terrell Thomas, Randy Evans, Clifford Glover, and  thousands of other black lives that have been cut short by police brutality and racist violence. The protests are for those whose names have been erased and lost by a system, which allows for such atrocities to reoccur and go unpunished.

Dating back to centuries, racism faced by black people in America is deep-rooted. Manifesting when the first slave ship arrived in Jamestown, Virginia in the 1600’s, it flourished even after the emancipation proclamation. It continued to play a vital role in every level of society during the Jim Crow period. Sadly, yet unsurprisingly the racial injustice still thrives proudly despite the legislative victories of the 1960’s, brought about by years of direct action and grassroots movements. Needless to say, police brutality continues to disproportionately ravish black communities.

Ironically, during protests against police brutality, the police responded with more acts of brutality with many such incidents being recorded and circulated on social media. Over 10,000 people have been arrested and strict curfews have been imposed in 25 cities across 16 states. As the militarised police tear-gassed and shot rubber bullets at mostly peaceful protestors, use of excessive violence has only elevated the cause further. However, the attacks were not just reserved for protestors, members of the press have also bore the brunt. Photojournalist Linda Tirado’s left eye was permanently blinded by a rubber bullet and Omar Jimenez, a CNN reporter, was arrested live on TV despite identifying himself as a journalist, prompting CNN to call this a violation of their First Amendment right.

An ABC poll revealed that 74 percent of Americans felt that the killing of George Floyd was due to a broader problem in the treatment of black people by the police in comparison to just 43 percent following the death of Eric Garner in 2014. This highlights the growing frustrations felt by more Americans and explains the sustained and the widespread nature of this particular demonstration. Despite protests receiving some condemnation for the looting and violence committed by a small minority of protesters, it’s undeniable that protests have begun to affect some real and historical change with reforms being proposed at the federal and local levels of government. Some of the noteworthy results of the protests are that Minneapolis has pledged to dismantle its police department and shift towards a community based public safety model. Furthermore, massive reforms are pledged in New York and a database has been set up to record police brutality at the protests. In London, statues of those linked to the slave trade are being taken down.

As South-Asians, we are often the victims of racism and prejudice however it is pivotal that we recognise that the discrimination we face is different to that faced by black people. We must acknowledge and accept that anti-blackness is enriched in a lot of our cultures. For instance, the archaic caste system, prime reason for too many honour-based killings, is an example of the thriving discrimination that still exists in our society. Anti-blackness and the preference for whiteness is abundantly visible as those in the ‘upper castes’, who were historically depicted as more respected and desired, are often fair skinned and those from the lower castes, often darker, were seen as undesirable and inferior. Our obsession with fair skin undoubtedly leads to the vilification of darker skin and as a consequence black people. Colourism, another plague in our society, further allows anti-blackness to live comfortably amongst us with skin lightning products building multi-billion dollar industries by profiting off our anti-blackness. With many movies and advertisements perpetuating that dark is sinister and only whiteness is the ultimate salvation, it is no wonder that many of us unknowingly facilitate white supremacy, which actually oppresses us too.

Luckily, there are many ways in which we can fight back against anti-blackness and become allies of the movement. Firstly, we must listen, understand and educate. Do not look past the racist comments made by your friends and families because you think ‘they don’t really mean it’, challenge such ignorance and racism head on and aim to educate. Do not under any circumstance say the N word. Moreover, challenge the model minority myth, which perpetuates the problematic idea that non-white people can succeed and overcome racism by striving for success. This is often weaponised to dehumanise black communities and downplay the real reasons, including legislations and decades of underfunding, which have led to such disparities. For example, the Immigration Act of 1965 in the US legislated for a preference system of immigration for skilled professionals, this allowed many Asians to emigrate and remain as upper middle class citizens in the US. Comparatively, many black families’ ancestry is traced back to the slave trade meaning that they had little to no inherited wealth. Hence, it is completely absurd to argue that anti-black racism and over two centuries of slavery can be overcome by hard work.

The global struggle, which is taking place right now, is not a black people vs. white people fight; it’s a fight against racism. It is as much our fight, it is as much our responsibility as humans to stand in solidarity with our black brothers and sisters and challenge the system and individuals who perpetuate racism in any form, because as Martin Luther King Jr. once said, ‘Injustice anywhere is a threat to justice everywhere.’

Born in Nepal and raised in England, Sabita is currently studying towards a Law degree at the University of Liverpool.