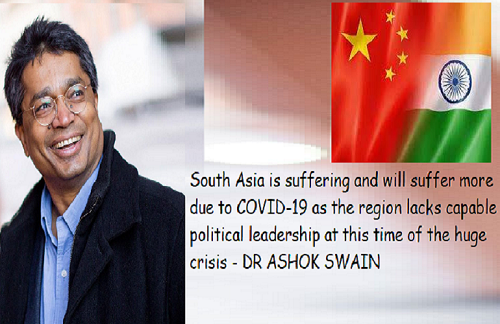 Professor of Peace and Conflict Research at Uppsala University, Sweden, DR ASHOK SWAIN is also UNESCO Chair of International Water Cooperation and  Director of Research School for International Water Cooperation at the same University. Prof Swain has been teaching at the Uppsala University since he received his Ph.D. from the Jawaharlal Nehru University, New Delhi, in 1991.  He has been a Mac Arthur Visiting Fellow at the University of Chicago, visiting professor/fellow at UN Research Institute for Social Development, Geneva; University Witwatersrand, South Africa and University of Science, Malaysia, among others. He spoke to BHAGIRATH YOGI and JAGAN KARKI on increasing tension between India and China and its likely implications. Excerpts of the interview:

How do you see the recent clashes between China and India in Ladakh region? What could be its implications on Sino-Indian relations?

It is a clear case of China breaking the status quo and intruding into a large and strategically key area which was under Indian control. The failure of military intelligence from the Indian side has helped China to take that area and build supporting infrastructure. Indian military response has been late and reactive. However, due to confusion in the Indian political leadership over its China policy, the Indian military has already suffered huge losses, both in terms of death and injury to its forces and also to its pride. At this time, India doesn’t have military power, economic strength, and also most importantly the political will to confront China directly. The implications of it will be further deterioration of the bilateral relationship and an increase in anti-China public sentiments.

Why do you think Chinese army have become more aggressive recently at a time when India is a major trading partner with China?

China understands that India is more economically dependent, particularly in trade and investment on China than China on India. So, the economic factor doesn’t play many roles in restraining China’s aggressive actions. Though India considers China as a threat, China considers India as an irritant only. Thus, China wants to show its superior military and diplomatic power, so that India would be hesitant to openly align with anti-China forces. That will give China free space to concentrate on its security challenges on the eastern front.

Prime Minister Modi, before being elected as the Prime Minister of India in 2014, was not allowed to visit the countries in Europe and North America due to allegations regarding his role in the 2002 anti-Muslim riots in the state of Gujarat. So, as the Chief Minister of Gujarat, he had traveled several times to China in search of investment as well as political legitimacy. After he became the Prime Minister, though he wanted to continue to maintain good relations with China, he at the same time openly aligned with the USA. His signing of the Logistics Exchange Memorandum of Agreement (LEMOA) with the USA in 2016 and boycott of China’s Belt and Road Initiative (BRI) since 2017 have angered China. However, the most recent provocation was Modi’s political redesigning of the state of Jammu and Kashmir and making Ladakh a separate administrative unit, and also Modi’s alter ego Amit Shah boastfully declaring in the Indian Parliament of India’s intention to recapture China-controlled Aksai Chin.

What do you think could be implications of increased Sino-Indian tensions to smaller countries like Nepal in South Asia?

Smaller countries like Nepal have been caught for some time in the shadow fight between two big powers in the region. India, in desperation to keep its control in the region, has been using all its means to keep China away, but China is too big and powerful for that. Countries like Nepal, Bangladesh, and Sri Lanka have already become very much dependent upon China for their trade and receiving foreign investment. In failing to outcompete China, India has been using its strength to be a spoiler. This situation is going to be much worse when China and India’s tension become overt and acute. Smaller countries will be coerced to take sides openly and that will create both short and long term security challenges for them.

How do you see the role of SAARC in reducing tension in the nation?

Unfortunately, not much. The India-Pakistan rivalry has reduced SAARC to be not only toothless but also voiceless. SAARC could have possibly played a very positive role in mediating between India and Nepal in the on-going border dispute, but at this time, neither SAARC has the mandate nor the strength to do anything.

Few analysts say the 21st century is going to be the Asian century. How do you see the prospect of cooperation or conflict between major Asian powers in the days to come?

China has virtually stopped saying the 21st century to be the Asian Century as it thinks now it is going to be the Chinese Century. The hope for the Asian Century was thriving when India was democratically stable and its economic growth was spectacular, particularly in the first decade of the 21st century. For the last few years, the Indian economy has been doing miserably and at the same time, there are serious questions being raised about its democratic and secular character. Unless India does a course-correction soon, it will be an enabler of making 21st Century a Chinese Century instead.

How do you see the response of South Asian governments to deal with the Covid-19?

Unfortunately, the government response to the COVID-19 pandemic in South Asia in general and India, in particular, has been pathetic. Invariably all the governments in the region first tried to ignore the threat of the pandemic and when it became serious, they reacted by blaming others. This being a public health crisis, the policy response should have been for public health not for the political and religious expediencies. South Asia is suffering and will suffer more due to COVID-19 as the region lacks capable political leadership at this time of the huge crisis. Political leaders of the region have failed to rise above their petty political mindsets.