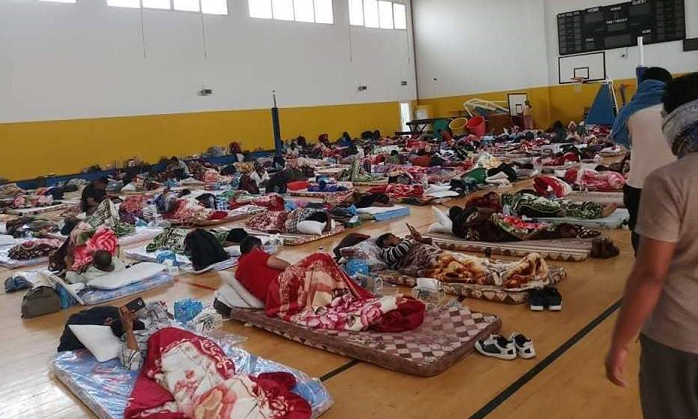 The government of Nepal finally starts bringing Nepali migrant workers back home amid Covid-19 pandemic but it’s too late, too little, critics say

London — Sunita Maharjan lost her job in the UAE in March this year. Her company, a franchisee of Al Shahi, told her that she has been made redundant in the wake of the Corona pandemic. She is one of tens of thousands of South Asian migrant workers who have lost their jobs since the pandemic hit the Gulf region early this year.

“I don’t have any savings left. I want to go back home but I don’t know what I will be doing there,” said Sunita who comes from Kathmandu.

On Friday  (29th May), the government of Nepal announced that it will bring in 25,000 Nepalese stranded in the Gulf countries, Malaysia and Nepali students in Bangladesh. On 5th June,  nearly 200 Nepalese returned home from UAE and Myanmar. Since then, over 4,000 Nepalese – including women and children—have returned to Nepal. But critics say the government’s arrangement is too little, too late.

Rights groups estimate that some 500,000 to 600,000 Nepali migrant workers are waiting in the Gulf Cooperation Council (GCC) and other countries. And, there are humanitarian issues as well. Bodies of over 100 Nepalese – who died of causes other than Covid-19- are stranded in the Gulf countries. In a statement, the government said it will provide NRs 50,000 (approx. 500 USD) to families who agree to carry out final rites of their family members in the country where they died. But many families want to take the bodies of their beloved back home.

“I want to take the body of my husband to Nepal as soon as flights resume. Please help me,” Chandra Kala Neupane, whose husband died in Kuwait on 6th May, told South Asia Time (SAT) early this month. The hospital said he died of ‘sickness’ but did not explain the cause.

Chandra Kala arrived in Kuwait nearly three year ago, along with her husband, Bishnu. Both of them were working in the same company. They were able to save some money and send back home to support the education of their two sons in Kathmandu and elderly parents in Kapilvastu in western Nepal.

Their company asked them for nearly Rs 150,000 (approx. USD 1,500) each to renew their visa which they could not afford. They decided to return home but on 21st March 2020, the government of Nepal stopped all international flights in the wake of the Covid-19 pandemic. On 2nd May, Bishnu– who was staying at another floor of the hostel along with his male colleagues—fell ill and was taken to the hospital. “I wasn’t informed though I was staying in the same building and was not allowed to meet him in the hospital. I regret it,” said Mrs Neupane.  She said friends of her late husband later told her that he had fainted throwing froth from his mouth. “But he did not have amy symptom of Corona.”

According to latest updates, Chandra Kala managed to send the body of her husband to Nepal last week which is now being kept at the TU Teaching Hospital morgue. She is now planning to return to Kathmandu on Wednesday.

There are hundreds of migrant workers whose visa have expired, visitors who have been stranded and pregnant women who want to return home as soon as possible so that they could deliver their babies in the vicinity of their loved ones. But the Nepali government first seemed reluctant and later unprepared as the crisis loomed large.

Accoring to the Board, over 800 Nepali migrant workers have died while working abroad over the last 10 months until mid-April this year. It doesn’t include the number of Nepalese who have committed suicide after the Covid-19 spread.

The Covid-19 is having devastating impact on families who depend on remittance as well as on the Nepali economy at large. The Economist magazine (in its 23rd May 2020 issue) reported that Nepali migrants who are still overseas are now sending back only a quarter of what they were in January. Many send back nothing at all, having returned home.

International rights groups are also expressing their concerns regarding the pathetic situation migrant workers find themselves in the Gulf and other countries.

Migrant workers are especially vulnerable to the effects of the pandemic, so it’s crucial that governments and employers pay heed to their moral and legal obligations. They still have a duty to uphold migrant workers’ rights during the crisis, rights groups say.

“Host country governments and employers need to provide equitable access to protection, detection and treatment measures, to counter the spread of Covid-19 and to take care of those who fall sick. They need to provide safe accommodation, and ensure that workers who can’t come to work due to sickness or quarantine still receive their pay,” said Meenakshi Ganguly, South Asia Director at the  Human Rights Watch, a US-based rights group, told South Asia Time.

“Undocumented workers also need full access to care and services. Controlling the spread of the virus means that everyone has to be taken care of, irrespective of their nationality or status. Domestic workers are especially vulnerable, including to a heightened risk of abuse in their workplaces. The authorities in the countries where they work, and the embassies of their own governments, should increase protection measures and intervene to protect them when necessary. Those who abuse workers must be held accountable,” she added.

But, what are the obligations of the origin countries from where the migrant workers come from?

“Citizenship means they have a right to return home if they want to. Governments, many of which are which are receiving hundreds of millions of dollars in relief to help them respond to the pandemic, need to make provision for migrant workers returning home, including quarantine facilities if necessary. For governments, simply shutting the door to their own people is not an option,” said Ms Ganguly.

The External Affairs Ministry of India said India has already brought back over 100,000 Indian citizens back home under its “Vande Bharat” evacuation mission since 7th May. Around 38,000 more people are expected to be repatriated from 31 countries over the next few weeks, the Ministry told the BBC.

Pakistan and Bangladesh are also bringing back their citizens from the Gulf and other countries.

But, for countries like Nepal, bringing its’ own citizens back home is going to be a Himalayan challenge – in view of lack of financial and human resources, poor management and political will. It is now looking up to its own diaspora and international agencies for help.

Until then, migrant workers like Sunita will have to keep waiting to return home and reunite with their families.