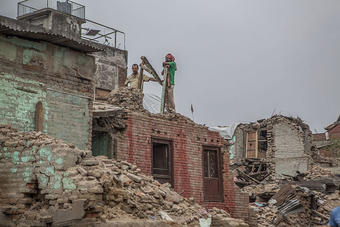 London — We discovered a series of faults at the foot of the Himalayan mountain range that have never been seen before,” explained U of A geologist John Waldron, who was a co-author of the study with graduate student Mike Duvall.

Waldron explained that the newly found faults show that the front of tectonic movement in the mountain belt is 40 kilometres farther south than scientists previously thought.

“Our research highlights the need to look below the surface, and farther afield, to fully understand earthquakes and structures within the Himalaya,” said Duvall, whose work on the study was supervised by Waldron.

“This network of faults shows that Himalayan deformation reaches farther than we previously thought and provides a glimpse into the geometry and formation of nascent mountain ranges.”

The research team used seismic profiles—images that look like slices through the top few kilometres of the Earth’s crust. These profiles were originally collected during petroleum exploration, by recording sound waves bounced off sedimentary layers buried beneath the Ganga flood plain of the Ganges River, which carries much of the sediment eroded from the Himalaya.

The data show that while southeastern Nepal is currently nearly flat, the thrusting produced by movement of the tectonic plates has already reached this area.

Waldron said that while there has not been an earthquake recorded in the area since accurate scientific records began about a century ago, his research results suggest there is potential for earthquakes to happen.

“Most of these faults only slip every thousand years or so,” he explained. “We discovered that a substantial part of this area has an almost horizontal fault underneath it, which has the potential to slip and cause a damaging earthquake.”

For more than 100 million years, the Indian subcontinent has been drifting northwards. In the last 40 or 50 million years, the subcontinent started to collide with Asia, giving rise to the Himalaya, the largest mountain range in the world. India is still sliding northwards into Asia at a rate of nearly two centimetres per year—about as fast as your fingernails grow, Waldron noted.

“Along the front of the mountains in Nepal are thrust faults, formed where the Indian subcontinent is being pushed underneath Asia,” he said. “The movement is jerky, which produces earthquakes. Because this is a densely populated part of the world, these earthquakes can be catastrophic.”

In 2015, a serious earthquake in Kathmandu, Nepal, with a magnitude of 7.8 on the Richter scale, destroyed hundreds of thousands of homes, killing nearly 9,000 people and injuring more than 20,000. Though the newly identified faults are not in the city of Kathmandu, the southeastern portion of Nepal is densely populated.

Collaborators on the research include Laurent Godin from Queen’s University and Yani Najman from Lancaster University.

The study, “Active Strike-Slip Faults and an Outer Frontal Thrust in the Himalayan Foreland Basin,” was published in Proceedings of the National Academy of Sciences.   From Phys.org