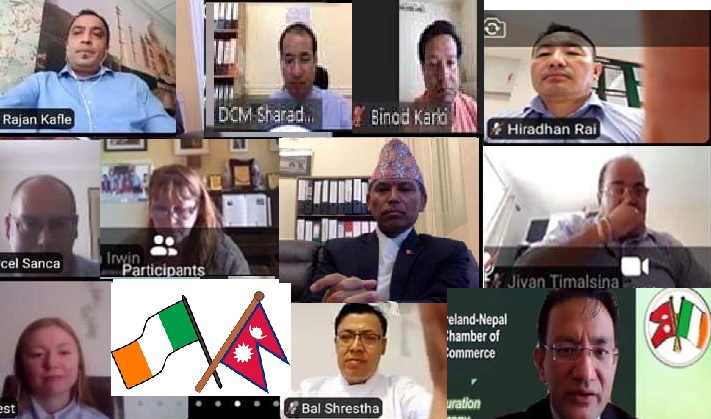 London — The Ireland-Nepal Chamber of Commerce (INCC) has beend formed under the chairmanship of Mr Vincent Barry, Co-Founder and Managing Director of the ICD Business School.

Ambassador of Nepal to the Republic of Ireland as well as to the UK, Dr Durga Bahadur Subedi, officially launched the formation of the Society amidst a virtual ceremony on Saturday. Mr Deepesh Man Shakya, Vice President and CEO of the newly formed Chamber informed about the activities leading to the establishment of the INCC.

“Nepal and Ireland enjoy very warm, close and cordial relations which are marked by enormous goodwill, mutual trust and understanding and respect to each other’s national interest and aspirations,” said Ambassador Subedi in his inaugural speech, adding “ (the) establishment of the INCC is a milestone development in strengthening our bilateral ties particularly for promoting bilateral trade and development. He also thanked the Nepal-Ireland Society for its role in promoting bilateral relations between the two countries.

Seán O’Fearghaíl, Speaker of the Irish Parliament, had sent his good wishes for the success of this initiative.  Mr. Peter O’Connor, Deputy Head of Mission at the Embassy of Ireland, New Delhi and Mr. Manoj Bahadur Shrestha, Irish Honorary Consul for Nepal, also joined the virutal launch ceremony and offered their full support and assurance for necessary help for the success of the  INCC.

“I look forward to being part of the next stage of the bi-lateral alliance between Ireland and Nepal,” said Alison Irwin, newly appointed Secretary of the Chamber.

The dynamics, vision and mode of operation of the INCC is certainly going to have a transformational impact in regard to Nepal – Ireland bilateral trade and business, said Alan Mercel-Sanca, executive director of the UK Nepal Friendship Society (UKFNS).

Nepal and Ireland had established formal diplomatic relations in 1999. The Nepal Ireland Parliamentary Friendship Group was established in April 2017.