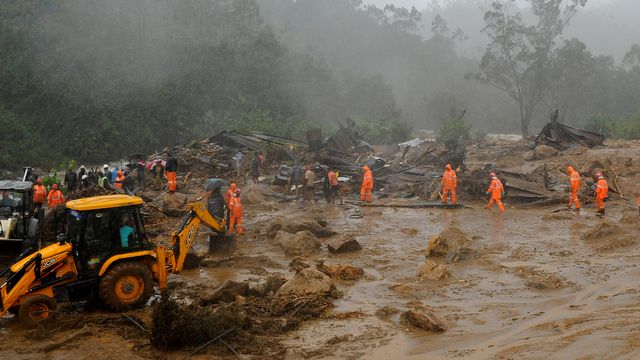 Heavy monsoon rains since May across South Asia, including in India, Bangladesh, Nepal, Pakistan and Afghanistan have caused floods and landslides leaving 1,300 dead or missing and displacing over 18.5 million. The governments’ failure to take adequate relief measures amid the COVID-19 pandemic has intensified flood victims’ suffering. They are also contracting water-borne diseases.

In India, over 13 million people are affected, and 900 deaths have been reported from the states of Bihar, Assam, West Bengal, Arunachal Pradesh, Meghalaya, Maharashtra and Kerala.

In the southern state of Kerala, heavy rains in recent days triggered floods and landslides in Rajamala in the Idukki district, killing 52. In impoverished Bihar state, about 24 died and 7.5 million have been affected. In Assam, 136 deaths and over 5.7 million victims have been reported. Five persons have died in Mumbai. Media reports indicate 239 deaths and tens of thousands of flood victims in West Bengal, Arunachal Pradesh, Meghalaya, Maharashtra and Gujarat.

In Bangladesh, which is seeing its worst flooding in two decades, districts in the northern and central parts of the country, including the capital, Dhaka, were worst hit. The deaths stand at 145, and over 5.5 million have been affected.

In Nepal, floods and landslides have left 200 dead and 108 missing since May. In Pakistan 58 have died and in Afghanistan, at least 16.

Floods have damaged river embankments, bridges, culverts and roads, and houses, crops, livestock, domestic animals and poultry have been devastated. Victims lack drinking water and food. Social conditions are worsened by cuts to jobs and wages due to the COVID-19 pandemic.

The governments of South Asian countries have responded to the crisis with contempt and hypocrisy, refusing to provide adequate relief materials, rescue equipment, medicine, trained manpower and infrastructure.

Hundreds of people in Bihar staged protests, demanding basic needs such as drinking water and food. They blocked a bridge in Muzaffarpur on July 27, accusing the government of neglect.

After the protest, Bihar Chief Minister Nitish Kumar ordered a pittance of Rs 6,000 ($US80) paid “to the accounts of flood-affected families,” to dissipate social anger.

Victims in Assam complained they did not receive aid. Nilima Khatun, a villager in Assam, said: “Our villages and all nearby villages have been under chest-deep water for about a week now. … We are passing days in misery with no relief coming our way from the government.”

Bangladesh Prime Minister Sheikh Hasina has declared that she advised state officials to ensure adequate facilities for those affected. However, flood victims are starving since relief supplies are insufficient. On August 10, the Daily Star reported: “People whose houses have been damaged by floods are passing their days in extreme hardship amid insufficient government relief and support for their rehabilitation.”

Arif Hossain from Munshiganj District in central Bangladesh, who lived by transporting people on his small boat, told Interpress Service: “Many people in the areas left the villages … those who have no place to go, like me, are staying here in homes that are already [flooded] … We’re staying in a room submerged in knee-deep water.” He added, “I haven’t received any kind of aid.”

While governments claim they are providing enough relief supplies, Dr Abhishek Rimal, Regional Emergency Health Coordinator of Asia Pacific for the International Federation of Red Cross and Red Crescent Societies, said on August 6: “Millions of people are also gathered in confined spaces or sleeping in temporary shelters with limited access to food, safe water and protection from mosquitoes, creating the perfect storm for the spread of mosquito and water-borne diseases.” These include malaria, dengue, diarrhea, and skin diseases.

At least 10,000 people have fallen ill, with children among the worst affected by rising malnutrition. According to UNICEF estimates, around 1.3 million Bangladeshi children will be affected by flooding this year.

Flood victims also face the devastating COVID-19 pandemic in crowded makeshift camps. India has become the third-worst impacted country in the world, with 2.3 million cases and over 46,000 deaths. Bangladesh is now the 15th-worst impacted country, with over 260,000 infections and over 3,500 deaths. Nepal has surpassed 23,000 cases with 83 deaths, and Afghanistan 37,000 cases with 1,354 deaths.

At a meeting on Monday with chief ministers of six states—Assam, Bihar, Uttar Pradesh, Maharashtra, Karnataka and Kerala—India’s Hindu-supremacist prime minister, Narendra Modi, declared that his government will install a “permanent system for forecasting of floods.” Such promises have frequently been made but not implemented in the past.

In a nationalistic attack on Nepal, Bihar Chief Minister Nitish Kumar said Indian authorities are “not receiving full cooperation from Nepal for the past few years.”

Flooding is an ecologically natural and sometimes essential process in any landscape with rivers and streams. In India, where the monsoonal climate brings concentrated rainfall in two to three months each year, massive river flooding is a yearly event across much of the country.

Today, however, it is not just a natural, but a man-made disaster. The landscapes near rivers have been ravaged by unplanned “development,” haphazard “urbanization” by respective governments and corporations.

Hundreds of thousands of families have been forced to settle in flood prone areas, with no early warning or evacuation systems. Large river basins such as Ganga-Brahmaputra basin are segmented by arbitrary “national boundaries,” where rival nation-states’ policies undermine common watershed planning.

Even the meagre funding allocated for flood management goes into hard infrastructure projects, such as dams or embankment raising, which can become problems rather than solutions in the long run. For example, in the state of Odisha, nine of the 14 major floods reported in the last decade were due to the sudden release of water from the Hirakud dam. One hundred and fifty people died in the worst flood in three decades in Gujarat in 2006, when the Ukai dam had to release large amounts of water.

Such failures become more disastrous with time as these static structures cannot accommodate the extremes in rainfall due to global climate change.

In the past few decades, a global consensus has emerged among experts and engineers on the need for Integrated Flood Management (IFM). The Associated Program for Flood Management (APFM) defines this as a “process of integrated land and water resources development, with a view to maximizing the efficient use of flood plains and minimizing loss of life and property.”

Such an approach requires a massive reallocation of funding to thoroughly study and monitor the watershed ecosystems, relocate communities if necessary, restore degraded ecosystems, and build multi-purpose engineering systems to manage water without harming ecological processes.

Recent developments in communication technology, remote sensing, and computer modeling, and rapidly advancing skill levels of the working class, have laid a strong foundation to realize IFM. The main barrier remains the capitalist nation-state system, based on private profit rather than human needs. Protection from floods and effective utilization and sharing of waters from these rivers requires socialist planning by establishing a Union of Socialist Republics of South Asia as part of a world socialist federation.