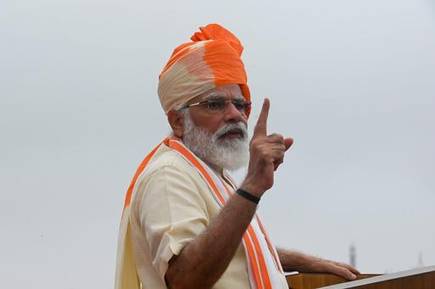 ANI , New Delhi — Prime Minister Narendra Modi on Saturday hailed people in the frontline of the battle against coronavirus, saying “corona warriors have lived the mantra of ‘Seva Parmo Dharma’ and served the people of the country.

Addressing the nation from the ramparts of Red Fort on the 74th Independence Day, the Prime Minister said it is an occasion to remember freedom fighters who laid down their lives for the freedom of the country.

“Congratulations and best wishes to all the countrymen on this festival of Independence Day. The sacrifice and the resolve to free the country of lakhs of sons and daughters of Maa Bharati is the reason for us being able to breathe in independent India today. This is a day to remember the sacrifices of our freedom fighters. This is also a day to show gratitude to security personnel including that of Army, paramilitary and police ensuring our safety,” PM Modi said.

He referred to the restrictions due to COVID-19 and said that children, the future of the country, were not at present at the celebrations and recalled the tireless contributions of corona warriors.

“We are going through distinct times. I cannot see young children in front of me today (at Red Fort). Corona has stopped everyone. In these times of COVID, Corona warriors have lived the mantra of ‘seva parmo dharma’ (service is the main duty) and served the people of India. I express my gratitude to them,” he said.

Modi exuded confidence that opening up of the space sector in the country will create employment opportunities.

“I am confident that measures like opening up the space sector, will generate many new employment opportunities for our youth and provide further avenues to hone their skills and potential,” he said.

“India has always believed that the entire world is one family. While we focus on economic growth and development, humanity must retain a central role in this process and our journey” the Prime Minister added.

“I am confident that India will realize this dream. I am confident of the abilities, confidence and potential of my fellow Indians. Once we decide to do something, we do not rest until we achieve that goal.”

Modi on Saturday said that the mindset of free India should be ‘vocal for local’ to achieve the goal of ‘Aatmanirbhar Bharat’ (self-reliant India).

“The mindset of free India should be ‘vocal for local’. We should appreciate our local products, if we don’t do this then our products will not get the opportunity to do better and will not get encouraged,” he said.

“Today, many big companies are turning towards India. We have to move forward with the mantra of Make for the world along with Make in India,” the PM added.

He also stated that country’s progress is seen in all fields in past six years and added that “be it providing every household with electricity, cooking gas, creating bank accounts for the poor or building toilets in all houses, India has progressed a lot in every field in the last six years.”

The Prime Minister also said that “Make in World should also be a key slogan like Make in India.”

“Amid COVID-19 pandemic 130 crore Indians took the resolve to be self-reliant and Atmanirbhar Bharat (self-reliant India) is on the mind of people. This dream is turning into a pledge. Atmanirbhar Bharat has become a ‘mantra’ for the 130 crore Indians today. I am confident that India will realise this dream. I am confident of the abilities, confidence, and potential of my fellow Indians. Once we decide to do something, we do not rest until we achieve that goal,” Modi said.

The Prime Minister said that he was aware of the challenges posed by the competition on the global scale and asserted that the efforts of crores of Indians would provide solutions.

He also said that this Independence Day was special as in the coming year India will enter the 75th year of its independence.

On his arrival in front of the Lahore Gate of Red Fort, Prime Minister Modi was received by Defence Minister Rajnath Singh and Defence Secretary Dr Ajay Kumar.

The GoC Delhi Area then conducted the Prime Minister to the Saluting Base where a combined Inter-Services and Police Guards presented general salute to PM Modi. The Prime Minister then inspected the Guard of Honour.

The Guard of Honour contingent for the Prime Minister consisted of one officer and 24 men each from the Army, Navy, Air Force and Delhi Police. The Guard of Honour was positioned directly in front of the national flag across the moat below the ramparts.