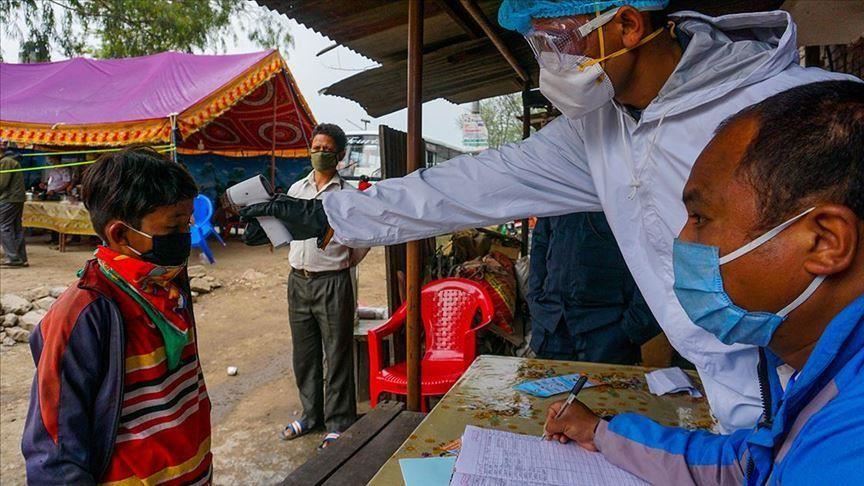 AA, KATHMANDU — As the Himalayan nation Nepal reports a spike in COVID-19 cases, the hospitals are turning patients away for want of beds and necessary equipment.

According to the Nepal Health Ministry, the country has so far reported 98,617 cases with 590 deaths, raising concerns that the country of 30 million souls could be the next regional hotspot.

When the cases were first reported in March the Tribhuvan University Teaching Hospital in the capital Kathmandu nearly doubled its bed count to 110 over the last five months . But doctors say, they are too little.

“Recently we received calls from four COVID-19 patients. There was a man in his mid-30s who had fainted. But we could not admit him,” said Santa Kumar Das, a Nepalese doctor handling the growing number of Covid-19 patients at a state hospital.

In his hospital, 15 intensive care unit (ICU) beds and seven ventilators have BEEN designated for the pandemic patients and they remain engaged beyond the capacity.

Health workers say the rise in infection rate has severely challenged the country’s health system with hospitals in the capital Kathmandu facing shortages of ICU beds and ventilators.

Some 233 patients have been admitted to the ICU and 37 people are on ventilator support across the country, according to figures issued by the Health Ministry.

Officials say, if the infections keep climbing, the country’s 2600 ICU beds and 900 ventilators will prove insufficient.

Santosh Sharma said his 55-year-old male relative, who recently contracted pandemic struggled to get an ICU bed at a hospital in Kathmandu.

“A week ago, he complained of fever so we suspected typhoid and admitted him to a local hospital [in Butwal, a town in southern Nepal],” Sharma told Anadolu Agency.

But his health deteriorated and a subsequent test found him COVID-19 positive.

He was lucky to find a bed at a private hospital in Kathmandu, after undertaking a long journey in an ambulance, but only after one of his relative pulled strings.

“He is doing well now and is given supplemental oxygen,” Sharma said.

Yagya Pokharel, a doctor at Patan Hospital, mentioned a case when a patient died as his relative was unable to find a hospital bed for him. All the 18 ICU beds in the hospital were occupied.

Besides the dearth of beds and equipment, hospitals are also facing a shortage of frontline health workers due to a surge in pandemic cases.

Around 200 health workers including doctors have so far been infected in Das’s hospital. While over 150 of them have returned to work after recovery, shortages of personal protective equipment are turning away others.

Pokharel, who is isolating himself after being infected with the disease, said the critical care for the growing number of severe cases was never been prioritized within the healthcare system in Nepal.

“Our health system prioritized hospitals for cardiac and neurological diseases over critical care and emergency medical service. We now see the consequences,” he told Anadolu Agency.

Fifteen of his colleagues at Patan Hospital have been diagnosed with COVID-19 positive.

The capital Kathmandu with a population of three million tops in COVID-19 cases, with 29,000 cases and 124 deaths.

Pokharel said the municipalities were largely to blame for the explosion of cases in the city.

“Outside of Kathmandu, the municipalities and village councils quickly built quarantine facilities. But mayors in the capital wasted the crucial time doing nothing,” he said.

While the lack of preparations has made matters worse, poor testing meant delayed diagnosis with patients rushed to hospitals too late.

Health experts warn the week-long Hindu festival of Dashain, which begins in mid-October, could spell further disaster as tens of thousands of people will travel to their home.

Bishal Dhakal, a doctor and co-founder of a nonprofit organization called Nepal Ventilator Services, however, said he has not yet lost his faith in the country’s healthcare professionals.

“We all know the government is not transparent and doesn’t like to collaborate. But our health system is not that bad. Our delivery capacity is still good and our health professionals are committed to their work,” said Dhakal whose initiative has provided 60 ventilators to hospitals in the country.

“The government should think strategically in terms of crisis management. It has to align its resources in such a way that it provides to hospitals that need it the most,” he said.