Re-election hopes fading, Trump tries for an election win in the courts 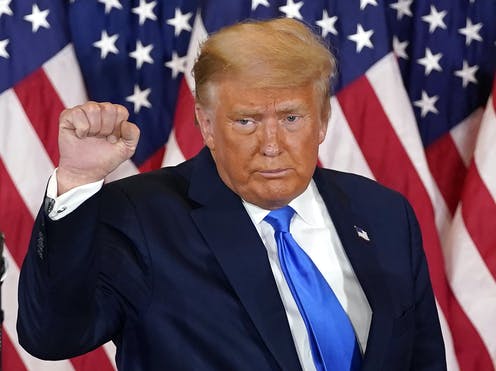 Sarah John, The Conversation
Facing the gradual erosion of early leads in several battleground states — and increasingly likely defeat in the presidential election — the Trump campaign is launching a well-planned legal assault to challenge the validity of ballots and the process of vote-counting itself.

The Biden campaign is responding with an equally well-coordinated legal defence and a grassroots fundraising effort called the “Biden Fight Fund”.

Once again, the courts will be called in to resolve a US presidential election, although it is unlikely any rulings will change the results significantly — unless the election comes down to extremely narrow margins in Pennsylvania or Georgia.

The unusual nature of the 2020 election — with a record 100 million people voting early — ensured a topsy-turvy election night. Compounding the problem has been the large partisan divide in how people voted, with Democrats favouring early and mail-in voting and Republicans favouring in-person voting on election day.

Many states quickly reported the results from in-person ballots on election night, giving Trump an early lead in several battleground states. Those leads were then offset as mail-in and early votes were added to the tallies.

Trump has been encouraging his supporters to view these shifting totals as fishy, claiming:

This is a major fraud on our nation. We want the law to be used in a proper manner. So we’ll be going to the US Supreme Court. We want all voting to stop.

So far, Trump has indicated he will bring challenges in four states. This is what he is claiming and the chances he will ultimately be successful.

In Wisconsin, where Biden leads Trump by less than a percentage point, the Trump campaign announced it will seek a recount. This is a relatively routine occurrence when margins are tight. Indeed, small margins often trigger automatic recounts in many states.

After Hillary Clinton lost to Trump in 2016 by less than a combined total of 80,000 votes in Michigan, Pennsylvania and Wisconsin, the Green Party candidate, Jill Stein, requested a recount. The courts denied the request in Pennsylvania, but partial recounts occurred in Michigan and Wisconsin.

In Michigan, the Trump campaign has filed a complaint seeking to halt the vote count on the basis that Republican Party “election inspectors” (that is, poll workers) do not have access to venues where the counting is taking place.

It is not uncommon for poll workers in the US to be affiliated with a political party. Many states, including Michigan, require poll workers from both parties to be present when votes are counted.

However, the filing provides no evidence that Republican poll workers have been denied access to vote-counting sites. Additionally, the legal bases of the claim appear weak.

For example, the complaint alleges Michigan is breaching the equal protection clause of the US Constitution because it is treating some voters differently from others in the state. Presumably, as the campaign alleges, this is because Democratic poll workers have been granted access to vote-counting sites that Republicans have not.

The complaint seeks a “speedy hearing,” which the Court of Claims has yet to grant. If it does, both the Trump campaign and the Michigan secretary of state will have to provide evidence of the access given to poll workers of different parties on election day.

Pennsylvania: taking it to the Supreme Court

In Pennsylvania, the Trump campaign has initiated court procedings to stop the vote count.

The first part of the lawsuit is similar to the challenge in Michigan: the campaign is seeking to stop vote-counting until Republican poll observers are given access to the sites.

Deputy campaign manager Justin Clark alleges Republican poll observers were unable to observe vote counting because they were forced to be too far away – a claim conspicuously absent in the Michigan filing.

The second part of the Pennsylvania action seeks to reject mail-in ballots from first-time voters who did not provide proof of identity when they registered.

The campaign claims Pennsylvania’s secretary of state didn’t follow the proper process in deciding to accept the ballots from these voters — a breach of federal law. However, the campaign has yet to produce evidence that significant numbers of first-time voters did not prove their identity.

This is perhaps the more interesting legal argument. The Help America Vote Act of 2002, a federal law passed in response to the contested 2000 election between George W. Bush and Al Gore, does require new voters to provide identification to register to vote.

If the Trump campaign’s lawsuit is successful, it could result in the removal of a swathe of mail-in ballots from the Pennsylvania vote tally.

Finally, in Georgia, the Trump campaign has filed a petition to prevent any potential counting of late-arriving mail-in ballots.

In one sense, this action is the most straightforward of all the challenges. The petition seeks an order that the existing law be enforced: that all mail-in ballots arriving after 7pm on election day are excluded from the count.

However, the deadline for mail-in ballots in Georgia was also the subject of pre-election legal challenges — meaning voters could have been confused by the rules.

A court initially ruled these ballots could be counted for up to three days after the election, but this decision was then overturned by a higher court.

Challenges are unlikely to be Trump’s path to victory

For now, the Trump campaign has not launched any challenges in the other battleground states of Nevada and Arizona.

We may not end up seeing any challenges in these states, given the tight deadlines involved with elections. All litigation must be resolved or halted by December 8 so the election results can be certified and the Electoral College process can continue. This culminates in the vote that legally chooses the next president on January 6.

The legal challenges are a long shot for the Trump campaign to change the outcome of the election.

If Biden is declared the winner this week and the challenges fail, there may be another repercussion. It could further undermine confidence in the electoral process — a strategy Trump has employed, with varying degrees of success, throughout the race.