Biography of Joe Baden the 46th President of the USA 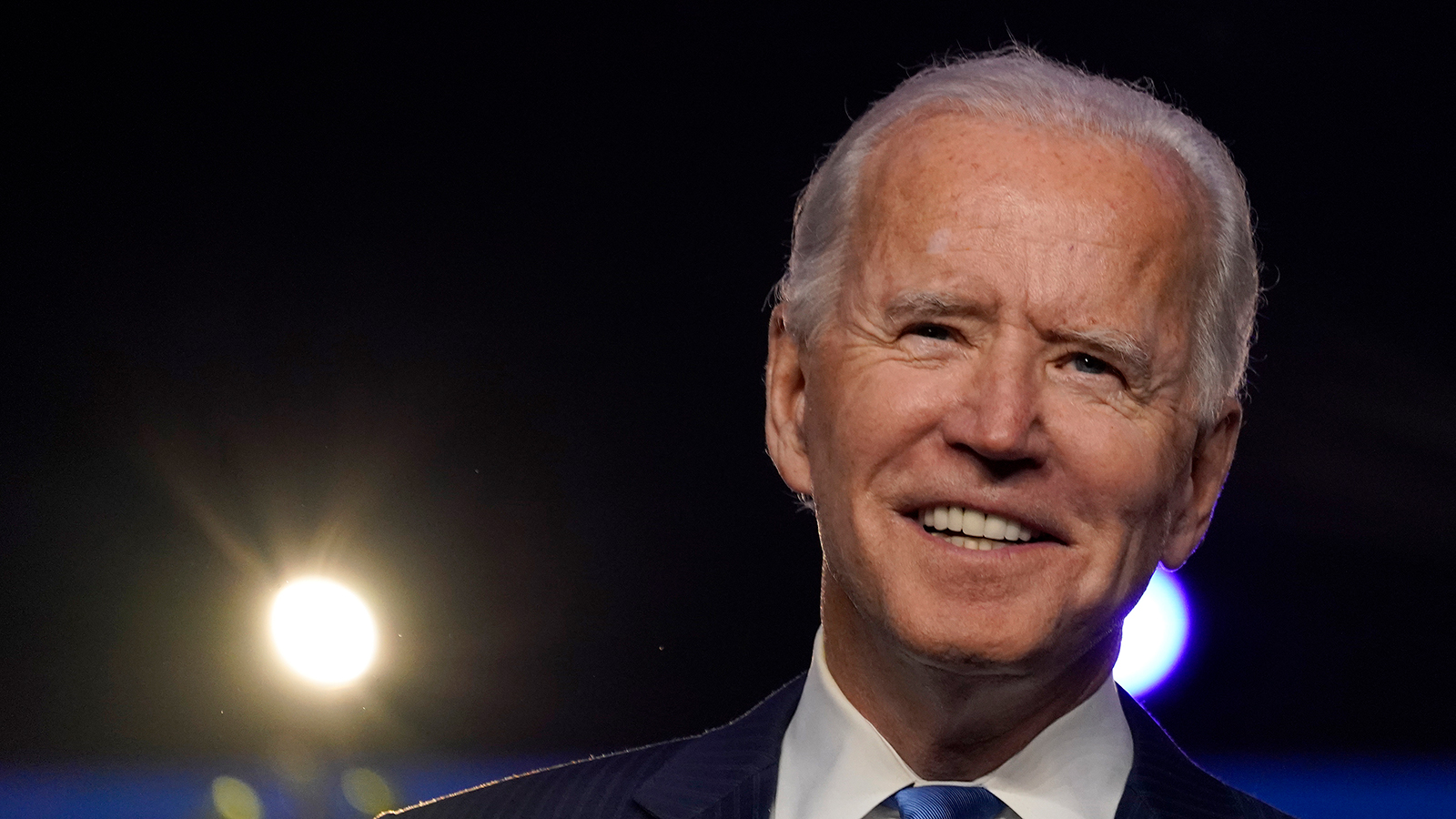 Trump had made a strong play in Nevada, holding several rallies there in the final stretch of the campaign. Democrat Hillary Clinton narrowly won Nevada in 2016, and Republicans saw an opening to expand their electoral map.

Nevada is also home to a large Hispanic population, a voting bloc that typically leans Democratic.

The last Republican presidential candidate to win Nevada was George W. Bush in 2004.

Joe Biden is the elected 46th president of the United States. He also served as Barack Obama’s vice president from 2008-2016.

Who Is Joe Biden?

Joe Biden briefly worked as an attorney before turning to politics. He became the fifth-youngest U.S. senator in history as well as Delaware’s longest-serving senator. His 2008 presidential campaign never gained momentum, but Democratic nominee Barack Obama selected him as his running mate, and Biden went on to serve two terms as the 47th vice president of the United States. In 2017, at the close of his administration, Obama presented Biden with the Presidential Medal of Freedom. Two years later Biden launched his campaign for U.S. president and was elected as the 46th president of the United States.

Long before reaching one of the highest political offices in the nation, Biden — born on November 20, 1942 — grew up in the blue-collar city of Scranton in northeast Pennsylvania. His father, Joseph Biden Sr., worked cleaning furnaces and as a used car salesman. His mother was Catherine Eugenia “Jean” Finnegan.Biden credits his parents with instilling in him toughness, hard work and perseverance. He has recalled his father frequently saying, “Champ, the measure of a man is not how often he is knocked down, but how quickly he gets up.” He’s also said that when he would come home sullen because he had been bullied by one of the bigger kids in the neighborhood, his mother would tell him, “Bloody their nose so you can walk down the street the next day!'”

Biden attended St. Paul’s Elementary School in Scranton. In 1955, when he was 13 years old, the family moved to Mayfield, Delaware—a rapidly growing middle-class community sustained primarily by the nearby DuPont chemical company.

As a child, Biden struggled with a stutter, and kids called him “Dash” and “Joe Impedimenta” to mock him. He eventually overcame his speech impediment by memorizing long passages of poetry and reciting them out loud in front of the mirror.

Biden attended the St. Helena School until he gained acceptance into the prestigious Archmere Academy. Although he had to work by washing the school windows and weeding the gardens to help his family afford tuition, Biden had long dreamed of attending the school, which he called “the object of my deepest desire, my Oz.” At Archmere, Biden was a solid student and, despite his small size, a standout receiver on the football team. “He was a skinny kid,” his coach remembered, “but he was one of the best pass receivers I had in 16 years as a coach.” Biden graduated from Archmere in 1961.

Biden attended the nearby University of Delaware, where he studied history and political science and played football. He would later admit that he spent his first two years of college far more interested in football, girls and parties than academics. But he also developed a sharp interest in politics during these years, spurred in part by the inspiring inauguration of John F. Kennedy in 1961.

On a spring break trip to the Bahamas during his junior year, Biden met a Syracuse University student named Neilia Hunter and, in his own words, “fell ass over tin cup in love — at first sight.” Encouraged by his new love, he applied himself more fully to his studies and was accepted into the Syracuse University Law School upon his graduation from Delaware in 1965. Biden and Hunter married the next year, in 1966.

Biden was at best a mediocre law student. During his first year at Syracuse, he flunked a class for failing to properly cite a reference to a law review article. Although he claimed it was an accidental oversight, the incident would haunt him later in his career.

After graduating from law school in 1968, Biden moved to Wilmington, Delaware, to begin practicing at a law firm. He also became an active member of the Democratic Party, and in 1970 he was elected to the New Castle County Council. While serving as councilman, in 1971, Biden started his own law firm.

In addition to his increasingly busy professional life, Biden had three children: Joseph Biden III (born in 1969), Hunter Biden (born in 1970) and Naomi Biden (born in 1971). “Everything was happening faster than I expected,” Biden said about his life at the time.

In 1972, the Delaware Democratic Party encouraged a 29-year-old Biden to run against the popular Republican incumbent J. Caleb Boggs for the United States Senate. Although few thought he stood any chance, Biden ran a tireless campaign organized mostly by family members. His sister, Valerie Biden Owens, served as his campaign manager, and both of his parents campaigned daily. That November, in a tight race with a large turnout, Biden won an upset victory to become the fifth-youngest U.S. senator elected in the nation’s history.

Just as all of Biden’s wildest dreams seemed to be coming true, he was struck by devastating tragedy. A week before Christmas in 1972, Biden’s wife and three children were involved in a terrible car accident while out shopping for a Christmas tree. The accident killed his wife and daughter and severely injured both of his sons, Beau and Hunter. Biden was inconsolable and even considered suicide. He recalls, “I began to understand how despair led people to just cash in; how suicide wasn’t just an option but a rational option … I felt God had played a horrible trick on me, and I was angry.”

Nevertheless, at the encouragement of his family, Biden decided to honor his commitment to representing the people of Delaware in the Senate. He skipped the swearing-in ceremony for new senators in Washington and instead took the oath of office from his sons’ hospital room. In order to spend as much time as possible with his sons, Biden decided to continue to live in Wilmington, commuting to and from Washington each day by Amtrak train, a practice he maintained through his entire long tenure in the Senate.

From 1973 to 2009, Biden served a distinguished Senate career. During his time in the Senate, Biden won respect as one of the body’s leading foreign policy experts, serving as chairman of the Committee on Foreign Relations for several years. His many foreign policy positions included advocating for strategic arms limitation with the Soviet Union, promoting peace and stability in the Balkans, expanding NATO to include former Soviet-bloc nations and opposing the First Gulf War. In later years, he called for American action to end the genocide in Darfur and spoke out against President George W. Bush’s handling of the Iraq War, particularly opposing the troop surge of 2007.

In addition to foreign policy, Biden was an outspoken proponent of tougher crime laws. In 1987, Supreme Court nominee Robert Bork’s failure to receive confirmation was largely attributed to harsh questioning by Biden, who was then chairman of the Senate Judiciary Committee. In 1994, Biden sponsored the Violent Crime Control and Law Enforcement Act to add 100,000 police officers and increase sentences for a host of crimes.

In 1987, having established himself as one of Washington’s most prominent Democratic lawmakers, Biden decided to run for the U.S. presidency. He dropped out of the Democratic primary, however, after reports surfaced that he had plagiarized part of a speech.

Biden had been suffering severe headaches during the campaign, and shortly after he dropped out in 1988, doctors discovered that he had two life-threatening brain aneurysms. Complications from the ensuing brain surgery led to blood clots in his lungs, which, in turn, caused him to undergo another surgery. Always resilient, Biden returned to the Senate after surviving a seven-month recovery period.

In 2007, 20 years after his first unsuccessful presidential bid, Biden once again decided to run for the U.S. presidency. Despite his years of experience in the Senate, however, Biden’s campaign failed to generate much momentum in a field dominated by Hillary Clinton and Barack Obama. Biden dropped out after receiving less than one percent of the vote in the crucial Iowa caucuses.

Several months later, though, Obama—having secured the Democratic nomination after a hard-fought campaign against Clinton—selected Biden as his running mate. With his working-class roots, Biden helped the Obama campaign communicate its message of economic recovery to the blue-collar voters crucial to swing states like Ohio and Pennsylvania. From the Biography.com