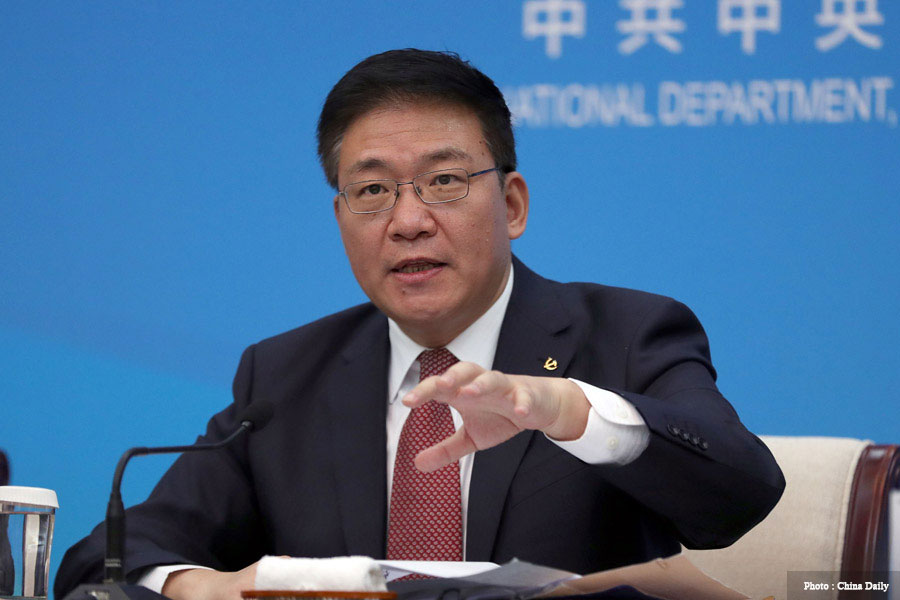 PTI , Kathmandu — A high-level Chinese delegation led by a vice minister of the Communist Party of Chinamet senior Nepal Communist Party leader Pushpa Kamal Dahal ‘Prachanda’ on Monday and discussed the political situation in the country, amid an intensified efforts by Beijing to patch up differences between the two warring factions of the party.Vice Minister of the International Department of the CPC Guo Yezhou, who arrived here on Sunday in what is believed to be China’s desperate attempt to avert a vertical split in the NCP, met Prachanda, who claims control over the ruling party after removing Prime Minister K P Sharma Oli from the posts of the party’s parliamentary leader and chair.Contemporary politics, especially that has arisen after Oli’s move to dissolve the House of Representatives, the possibility of bringing the two factions of the NCP together and Nepal-China cooperation figured during the talks, the Kathmandu Post reported, quoting Prachanda’s secretariat.The meeting came a day after the four-member team led by Guo held separate talks with President Bidya Devi Bhandari and Prime Minister Oli on Sunday to patch up differences between the two warring factions.The President’s Office and the Prime Minister’s Office have confirmed the meetings. However, they have not made public what transpired during the meetings, My Republica newspaper reported.Guo, who personally knows all senior NCP leaders, also met Madhav Nepal, who has replaced Oli as chairman of the Prachanda-led faction, it said.“Since Oli has declared snap polls for April 30 and May 10 after dissolving the House, the Chinese delegation is also enquiring if elections are possible,” the Post said, citing sources.The Chinese delegation will also meet with Nepali Congress President Sher Bahadur Deuba and Janata Samajbadi chair Upendra Yadav.China is not happy with the split in the largest communist party of Nepal, according to sources.Guo is trying to patch up differences between the two warring factions of the ruling party – one led by Oli and the other led by Prachanda – during his four day stay in Nepal, the media reports said.Earlier, Gou travelled to Kathmandu in February 2018 when Oli-led CPN-UML and Prachanda-led NCP (Maoist Centre) – were all set to merge and form a unified communist party following victory of their alliance in the 2017 general elections. Later in May, 2018, the two communist parties merged and formed a new party named NCP.Guo, after assessing the situation of the ruling party and encouraging both factions of the NCP to seek some kind of common ground for party unity, will communicate the message of the Chinese leadership, including that of President Xi Jinping, to the NCP leadership, a ruling party leader said.Nepal plunged into a political crisis last Sunday after Prime Minister Oli, known for his pro-Beijing leanings, in a surprise move, recommended dissolving the 275-member House, amidst a tussle for power with Prachanda.Acting on the prime minister’s recommendation, President Bhandari dissolved the House the same day and announced fresh elections on April 30 and May 10, sparking protests from a large section of the NCP led by Prachanda, also a co-chair of the ruling party.This is not the first time that China has intervened in Nepal’s internal affairs.In May and July, Hou held separate meetings with the president, the prime minister and other senior NCP leaders, including Prachanda, when Oli was facing mounting pressure to step down.A number of political party leaders had termed the Chinese envoy’s series of meetings with the ruling party leaders as interference in Nepal’s internal political affairs.China’s political profile in Nepal has been on the rise in the recent years with billions of dollars of investments under its multi-billion-dollar Belt and Road Initiative, including the Trans-Himalayan Multi-Dimensional Connectivity Network.Besides the investments, China’s ambassador to Nepal Hou has made open efforts to garner support for Oli.The CPC and NCP were regularly engaged in training programmes. In September last year, the NCP had even organised a symposium, inviting some CPC leaders to Kathmandu to impart training to Nepali leaders on the Xi Jinping thought ahead of the visit of the Chinese president, his first to Nepal, according to a Kathmandu Post report.