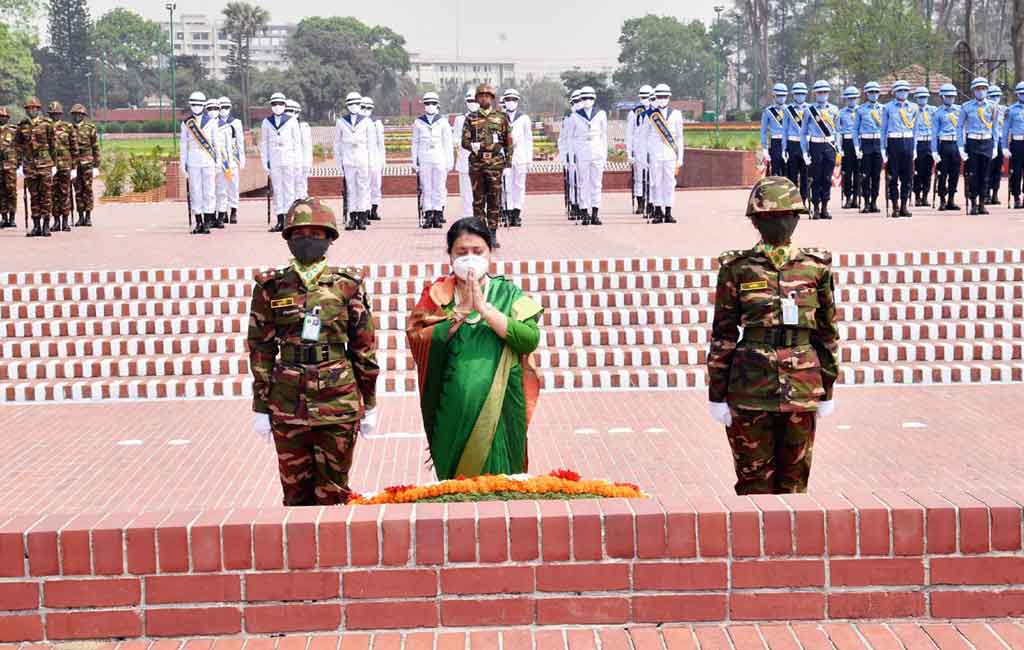 Kathmandu — The Ministry of Foreign Affairs (MoFA) informed that the Nepali delegation accompanying the President will consist of Minister for Foreign Affairs Pradeep Kumar Gyawali, along with secretaries and senior officials of MoFA, the Office of the President, and other relevant ministries.

During the visit, President Bhandari will attend the celebration of the birth centenary of Bangabandhu Sheikh Mujibur Rahman, Father of the Nation of Bangladesh, in Dhaka.

On the occasion, the President will deliver a statement on ‘Nepal-Bangladesh Relations and Bangabandhu’s Birth Centenary’. She will also hold talks with the President of Bangladesh at Bangabhaban.

The Nepalese president will pay rich tributes to the martyrs of the Liberation War of Bangladesh by placing wreaths at the National Memorial in Savar.

President Bidya Devi will sign the visitors’ book and plant a sapling there.

She will visit Bangabandhu Memorial Museum at Dhanmondi-32 to pay tributes to country’s founding Father Bangabandhu Sheikh Mujibur Rahman, the greatest Bangalee of all times.

Later in the afternoon, she will attend the National Parade Square (Ground) function at Tejgaon as the guest of honour where Prime Minister Sheikh Hasina will receive her.

A foreign ministry source said President Bhandari is scheduled to deliver a statement on the occasion of Bangabandhu’s birth centenary, The Dailystar writes.

According to the local media, this is the first visit of a Nepal president to Dhaka. The Himalayan state’s president is visiting Bangladesh at the invitation of her Bangladeshi counterpart.

She is the third among world leaders to attend the celebrations of the golden jubilee of Bangladesh’s independence and the birth centenary of Father of the Nation Bangabandhu Sheikh Mujibur Rahman.

President Bhandari will return home on March 23, according to MoFA.