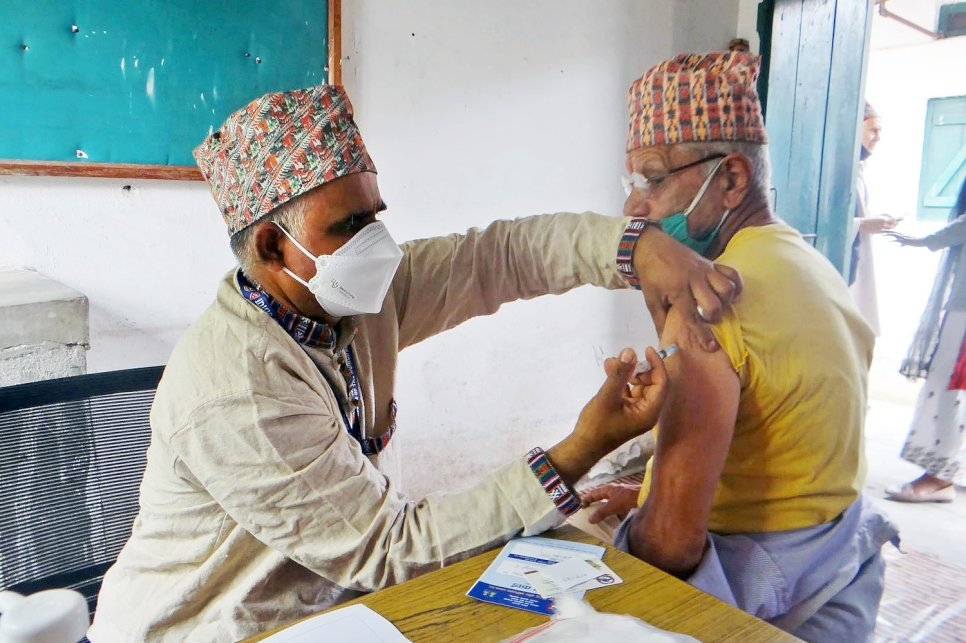 UNHCR , Kathmandu — Nepal has become the first country in the Asia Pacific region to provide COVID-19 jabs to refugees through its national vaccination rollout. The refugees at the settlement were vaccinated as part of the second phase of that rollout, which started on 7 March and targets people over the age of 65.

The country kicked off its vaccination campaign on 27 January after the Indian government donated one million doses of Covishield, the India-produced version of the Oxford-AstraZeneca vaccine. In the first phase, frontline health workers, sanitation workers, hygiene workers and security officials were vaccinated.

Local authorities, refugee leaders and security officials set up a temporary vaccination centre at the refugee settlement and as of 24 March, some 668 refugees above the age of 65 had received vaccinations against the virus across the country. More refugees will be enrolled in the vaccination programme as the government receives additional supplies of vaccines.

Nepal hosts nearly 20,000 refugees, mostly Tibetans and Bhutanese with arrival dates in 1959 and in the early 1990s respectively.

Since the onset of the pandemic, UNHCR, the UN Refugee Agency, has been working closely with other UN agencies and government authorities to advocate for the inclusion of refugees in COVID-19 preparedness and response plans.

“The Government of Nepal has shown exemplary leadership for public health responses by including refugees in the national vaccination plans and rollout,” said Carolin Spannuth Verma, UNHCR’s Representative in Nepal.

“Protecting the life of all people is our priority.”

“The risk of COVID-19 is the same for all. It doesn’t matter if you are a refugee or not,” said Shrawan Kumar Timilsina, the Chief District Officer of Jhapa, in eastern Nepal where the country’s two refugee settlements are located. “Protecting the life of all people is our priority.”

Bhakti Prasad Baral, 83, fled Bhutan in 1992 and is now living in Beldangi settlement. He said that he felt “lucky” to get the vaccine.

“It was really difficult to endure what was going on because of the virus,” said the octogenarian, who works as a Hindu priest in his community. “I have no words to thank the Government of Nepal for paying attention to older persons like us.”