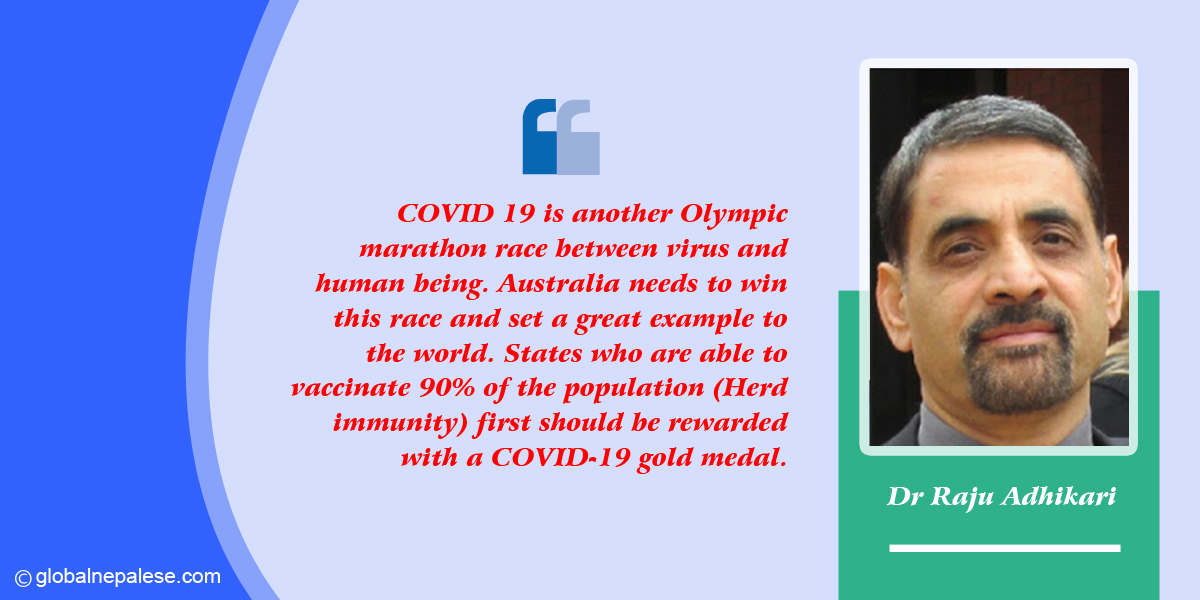 Australia’s performance in the Tokyo Olympics was the best ever with the highest number of medals and gold securing 6th position and made us all feel proud being Australian. Not only were their performances good on the track but also off the field which won everyone hearts.

COVID 19 is another Olympic marathon race between virus and human being. Australia needs to win this race and set a great example to the world. States who are able to vaccinate 90% of the population (Herd immunity) first should be rewarded with a COVID-19 gold medal.

The competition is against the moist contagious COVIV-19 Delta variant which is breaking all the records set by previous viruses and other variants of COVID. Here are some of the facts about Delta variant which makes it a strong contender to win the race if we don’t act now.

• Delta is the most infectious variants

• It might cause more severe illness than previous strains in unvaccinated persons.

• Its herd immunity threshold is revised to over 80 – 90 % population being fully vaccinated compared to Wuhan variant 67% (Ricardo Franco, an assistant professor of medicine at the University of Alabama at Birmingham)

• Its viral load is high which means people infected can harbor 1,000 times more viral particles in their nasal swab. (Ravindra Gupta, a clinical microbiologist at the University of Cambridge)

• Its incubation time to reach detectable levels is shorter < 3-5 days.

• It is sowing infection in younger people

• Insufficient testing makes it difficult to envisage the extent of spread.

• Pfizer and Moderna are seeking authorization of a booster dose of vaccine.

Vaccination reduces the risk of SARS-CoV-2 infection by eight-fold and the risk of getting ill, being hospitalized, or dying by 25-fold (CDC),

The virus may be ahead in the race for now but if Australian embrace Tokyo Olympic spirit and get quickly vaccinated, it will help win the race and the marathon gold medal .

(Dr Adhikari, a Nepali scientist based in Australia, is member secretary of Skill Knowledge and Technology Transfer (SK&TT) Department of the NRNA)