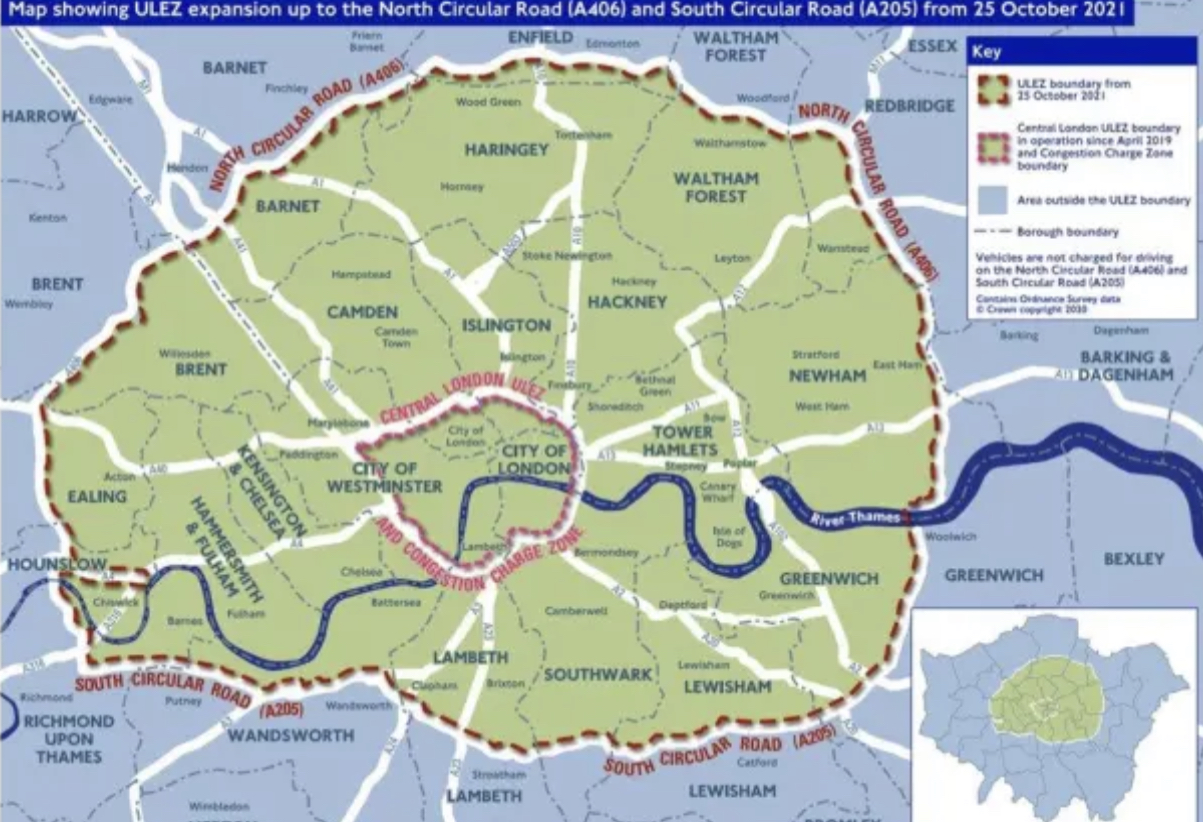 London — The Mayor of London, Sadiq Khan expanded the area covered by the Ultra Low Emission Zone (ULEZ) from central London up to, but not including, the North Circular (A406) and South Circular (A205) Roads on Monday.

The new zone is 18 times the size of the central London zone and now covers 3.8 million people. Measuring 380km2 it covers one quarter of London and is the largest zone of its kind in Europe. It will bring the health benefits of cleaner air to millions more Londoners, both inside and outside the newly expanded zone. The scheme will operate 24 hours a day, every day of the year except Christmas Day.

The ULEZ expansion, alongside tighter Londonwide Low Emission Zone (LEZ) standards for heavy vehicles introduced in March, are expected to reduce nitrogen oxides (NOx) emissions from road transport by 30 per cent across London in 2021.

The ULEZ is also a crucial step towards the Mayor’s ambitions to tackle the climate emergency and put London on the path to be a net zero carbon city by 2030. It is also an issue of social justice with the poorest Londoners, and Londoners from ethnic minority backgrounds least likely to own a car but also worst affected by toxic air.

A major awareness campaign has been underway over the past three years to ensure drivers and businesses are ready for the ULEZ expansion, with Transport for London’s (TfL) online vehicle checker being used more than 20 million times since 2018. Over a million letters have been sent to owners of non-compliant vehicles seen inside the zone, a press release from the Mayors’s office states.

The Mayor has provided £61 million in funding for grants for small businesses, charities operating minibuses and low-income and disabled Londoners to scrap their older, more polluting vehicles. However, unlike other Clean Air Zones, London has had no Government support for its scrappage schemes. Despite this, these schemes have helped remove over 12,000 more polluting vehicles from London’s roads, the single biggest such programme in the UK.

The existing ULEZ and the Londonwide LEZ have shown that charging to incentivise emissions reductions works and its impacts on air quality and health are rapid. Before the pandemic, there had been a 44 per cent reduction in roadside nitrogen dioxide concentrations in central London compared to in February 2017 when changes associated with the ULEZ began. The compliance rate for heavy vehicles covered by the Londonwide LEZ is an impressive 95 per cent up, from 48 per cent in February 2017 when the scheme was announced.

Many Londoners have already taken action to prepare ahead of of this announcement. Early indications show that 87 per cent of vehicles travelling in the zone already meet the ULEZ standards. This is a dramatic increase in compliance compared to 39 per cent in February 2017, when changes associated with the ULEZ began. This means Londoners are already experiencing the benefits of cleaner air. This is supported by new data, published last week by the Clean Cities Campaign, that London drivers are ditching diesel cars six times faster than the rest of UK*.

This high compliance rate also means that, as the scheme launches, it is expected only 110,000 vehicles each day are likely to need to pay the £12.50 charge. There are a number of options to avoid paying the charge including, walking, cycling, taking public transport, using shared mobility such as a car club or upgrading to a cleaner vehicle.

The expanded ULEZ has the most stringent emission standards, operates for longer hours and covers the largest area of any charging scheme in Europe. It is also a huge technical feat. Together, the Congestion Charge, LEZ and ULEZ require the processing of millions of images and tens of thousands of payments every day.

Crucially these benefits are felt beyond the zone and even beyond London. Environmental Defense Fund analysis found that vehicles that passed through London’s Low Emission Zone for heavy vehicles went on to drive through 95 per cent of the major towns and cities in England and Wales, bringing air quality benefits to a combined population of 18 million people**.

Everyone must take action to help make London’s air safe to breathe and today, to launch the scheme, the Mayor is bringing together Londoners representing communities, emergency services, boroughs, businesses and charities to celebrate the action they’ve taken to help clean up London’s air at an event at the Queen Elizabeth Olympic Park.

The vehicles and organisations represent the many ways Londoners can comply with the ULEZ, including by walking, cycling or using public transport, joining a car club or upgrading to a compliant vehicle. Whilst the Mayor is pleased to see so many organisations showing leadership by moving to electric vehicles, there is no need to purchase a brand-new or electric vehicle to meet the ULEZ standards. Petrol vehicles that meet the standards have been widely available since 2006 and compliant diesel vehicles have been wide