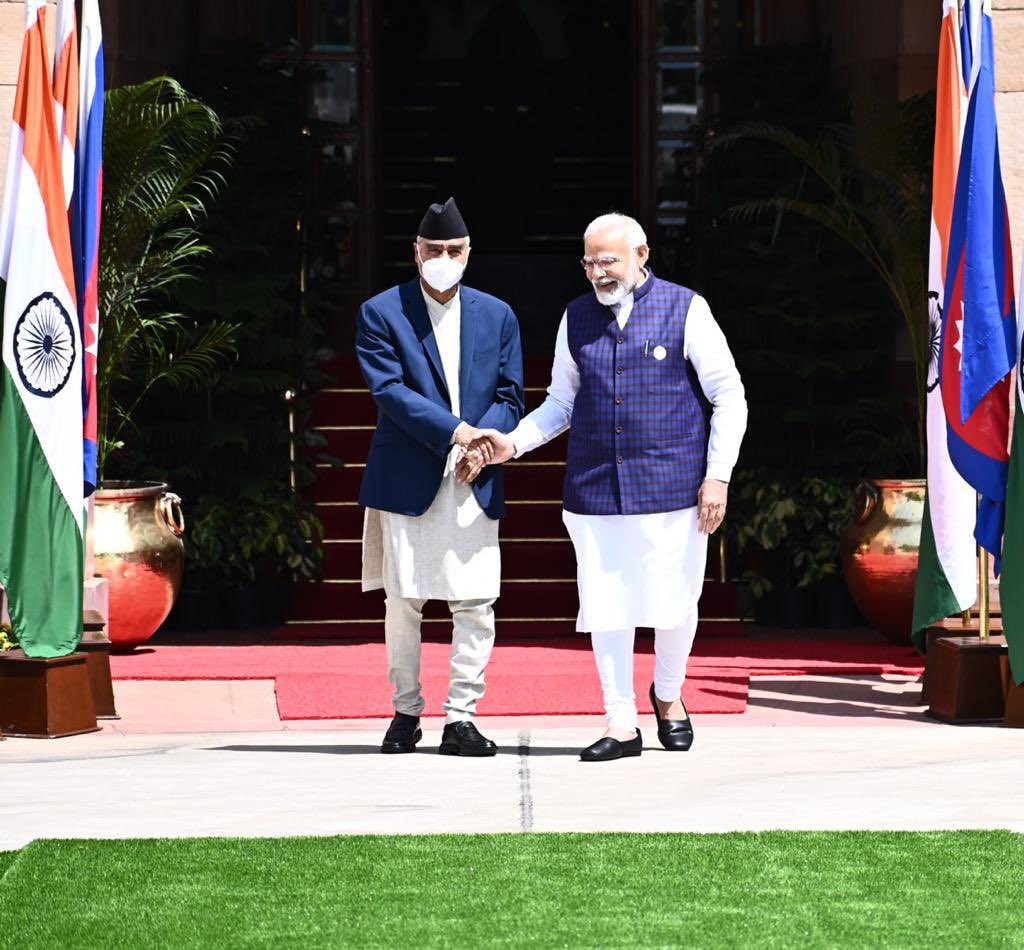 New Delhi — Prime Minister Narendra Modi and his Nepalese counterpart Sher Bahadur Deuba met in New Delhi today with the two countries launching multiple initiatives as well as signing four crucial agreements in multiple domains.The two countries signed agreements on Nepal becoming the 105th member of the International Solar Alliance (ISA), technical cooperation in railways, supply of petroleum products and sharing of technical expertise in the petroleum sector between Indian Oil Corporation Ltd. (IOCL) and Nepal Oil Corporation Ltd. (NOC).The two Prime Ministers also witnessed the launch of the first passenger train service between India’s Jayanagar and Nepal’s Kurtha, the hand-over of the Solu corridor transmission project by India to Nepal and the progress of the construction of 132 health facilities across 10 districts in Nepal under a Government of India (GoI) grant.The two countries announced the launch of the Indian RuPay card in Nepal, with the domestic variant of the RuPay card (roughly 83 per cent of all RuPay cards issued) to be functional on about 1400 Point of Sale (POS) machines in Nepal.The move makes Nepal the fourth country outside India where RuPay is functional after Bhutan, Singapore and UAE.The inaugurated Jaynagar-Kurtha railway section is part of the Jaynagar-Bijalpura-Bardibas rail link being constructed with grant assistance of INR 548 crore from the Government of India. It is a 35 km rail section, 3 km of which lies in the Indian state of Bihar and the rest in Nepal.The project is the first broad-gauge passenger rail link between the two countries, opening an entirely new dimension for cross-border connectivity. Till 2014, this was an existing rail service on a metre-gauge rail link between Jaynagar and Janakpur.

The Solu Corridor 132 kV power transmission line and substation project is one of the major projects in Nepal undertaken under the Government of India’s Line of Credit (LoC). The 90 km 132 kV Double Circuit line connects the remote Solukhumbu, Khotang and Okhaldhunga districts of North Eastern Nepal with Nepal’s national electricity grid.After its operationalization, the transmission line will bring electricity from existing and upcoming hydro projects in the area into the national grid, and also supply power into the rural electrification networks of nearby districts. The project is expected to be crucial for the socio-economic development in the rural part of Nepal, in addition to contributing to Nepal’s overall economic and industrial development.Nepalese Prime Minister Sher Bahadur Deuba also held wide-ranging deliberations with PM Modi on various topics including cooperation in the power sector, railway projects, flood control programs, as well as the border dispute between the two countries.Yesterday, the Nepalese Prime Minister met External Affairs Minister S Jaishankar and Foreign Secretary Harsh Shringla in the national capital.On Friday, he met Bharatiya Janta Party (BJP) President JP Nadda at the party headquarters in a courtesy meeting.The last Head of State/Head of Government-level visit from Nepal was in May 2019, when then PM K P Oli visited India for the swearing-in ceremony of PM Narendra Modi and the Union Council of Ministers. Before that PM Modi had visited Nepal in August 2018 for the 4th BIMSTEC Summit in Kathmandu, which was preceded by a State Visit to Nepal in May 2018.PM Modi had extended a congratulatory message to Sher Bahadur Deuba soon after he won the Vote of Confidence in Nepal’s Parliament. This was followed by a congratulatory telephonic conversation on 19 July 2021. The most recent meeting between PM Modi and Sher Bahadur Deuba took place on November 2, 2021, on the sidelines of COP 26 in Glasgow.Sher Bahadur Deuba is a veteran politician of the Nepali Congress with a political career spanning over seven decades. This is Deuba’s fifth tenure as PM. His first term was from September 1995 to March 1997.He has visited India several times, both when in and out of power. This will be his fifth visit to India as PM, with the last visit being in August 2018. The previous three visits took place in 2004, 2002 and 1996. (ANI)