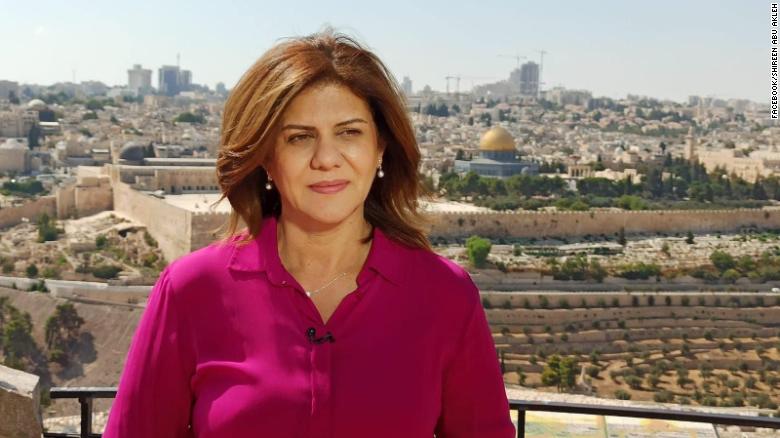 The Palestinian Ministry of Health said she was shot in the head by a live bullet in Jenin, and confirmed her death shortly afterwards. A second journalist, Ali Al Samudi, was also shot and is in a stable condition, the ministry said.

Al Jazeera has accused Israeli security forces of deliberately targeting and killing Abu Akleh and called on the international community to condemn and hold Israel accountable.

The Israel Defense Forces said its security forces had been operating in the area “to arrest suspects in terrorist activities,” and both Palestinian suspects and Israeli forces were firing at the time.

“As part of the activity in the Jenin refugee camp, suspects fired heavily at the force and threw explosives. The force responded by firing. Hits were detected,” the IDF said.

“The possibility that journalists were hit, possibly by Palestinian gunfire, is being investigated. The event is being examined,” the IDF added.

Al Jazeera journalist, Al-Samudi, who was with Abu Akleh when she was killed, said there were no Palestinian gunmen in the area at the time. “The Israeli army shot us,” said Al-Samudi who was also shot. “There was no Palestinian gunman in the place.”

In response to the shooting, Israeli Foreign Minister Yair Lapid said on Twitter his government had offered to conduct a joint Israeli-Palestinian investigation, adding: “Journalists must be protected in conflict zones and we all have a responsibility to get to the truth.”

Tributes have started pouring in for Abu Akleh as news of her death spread.

Abu Alkeh’s colleague, Nida Ibrahim, said she was a “very well respected journalist” who had been working with Al Jazeera since the beginning of the second Palestinian Intifada in 2000, according to the network.

“As you can imagine, this is a shock to the journalists who have been working with her,” Ibrahim said, in tears.

Abu Akleh was born and raised in Jerusalem and belonged to a Christian family, according to Bir Zeit University, where she was a teacher. She was 51, according to the university.

“She initially studied architecture at the University of Science and Technology in Jordan, then moved to the written journalism specialization, and obtained a bachelor’s degree from Yarmouk University in Jordan,” according to her university bio.