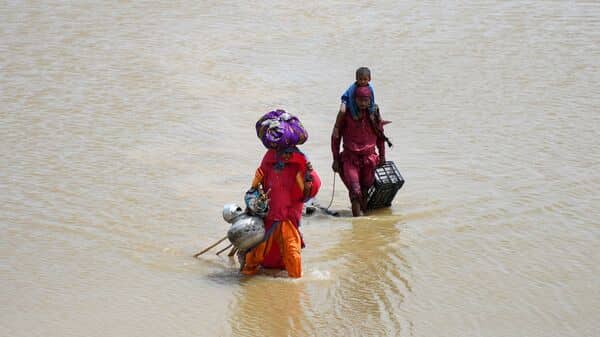 Hundreds of people are stranded across the river in the Manoor valley of Pakistan’s Khyber Pakhtunkhwa province after a flash flood hit the region on Friday, destroying at least 10 bridges and dozens of buildings.

“We need supplies, we need medicine and please rebuild the bridge, we are left with nothing now.” Those are the contents of a handwritten note villagers throw to our team when we visit.

The Manoor valley is located in the mountains of Kaghan – a famous tourist destination in Pakistan. The valley has been hit by a torrential flood that killed at least 15 people, including women and children.

Flash floods swept away the only concrete bridge connecting the scenic valley to the main city. Since then, all the villages on the other side of the river have been cut off and residents are waiting for help.

The BBC team reached the valley after a dangerous one-hour drive along a road was damaged at many points by the flooding and landslides.

In Manoor, two bridges have completely collapsed and a temporary wooden crossing has been erected. Here, we meet a woman sitting with her belongings. She tells the BBC she can see her home but is unable to reach it.

“My home and my children are on the other side of the river. I’ve been waiting here for two days now thinking the government might come and repair the bridge. But authorities are telling us that we should start walking around the other side of the mountain to reach our homes. But that’s a hike of eight to 10 hours. I am an old woman. How can I walk this much?”

She waits for a few more minutes and leaves when the rain starts again and water flowing underneath the temporary wooden bridge begins to swell up.

We see men, women and children sitting outside their mud houses on the other side of the river. They wave at us thinking we are government officials.

It is then that some of them throw us a piece of paper, packing it into a plastic bag filled with stones in order to throw it to the side of the river where we are filming. This is the only way they can communicate with the other part of the village these days. Mobile networks do not operate here.

The handwritten letter carries information about the losses they are coping with and also requests supplies and medicine for the stranded villagers.

“Many people are sick and can’t leave the village on foot. Kindly get the bridge built, it’s the main connection with the city,” the letter says.

“We need supplies. We need a road,” Abdul Rasheed, 60, tells us while speaking of his ordeal. He has lost his wagon to the flood – his only means of earning money to feed his family.

“There are many other people who have lost their property and means of income,” he says. “They need help. They need food. There was a small market here which was swept away. Shops had all the food and supplies.

“My home is on the other side and now I’ll have to walk for eight hours to reach my home. How can I do that in such an old age?” he asks.

Many shops and hotels have been destroyed here. Soheil and his brother have lost their mobile phone repair shop to the flood.

He tells the BBC he has three families to feed and is uncertain about his future now. “I don’t know what to do. No one has come here to help us as we deserve. Every shopkeeper here is worried. They are all poor people who have big families to feed,” he says.