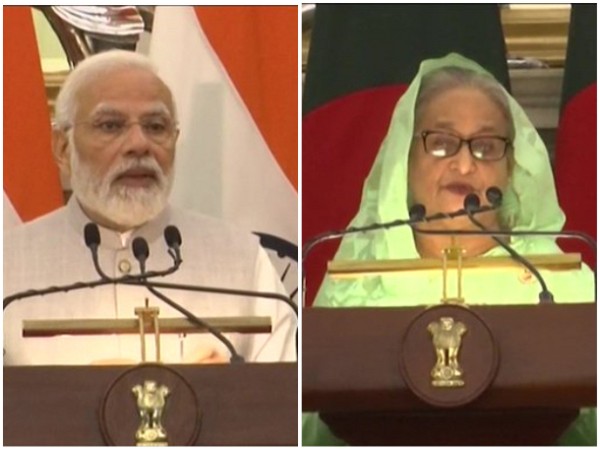 New Delhi —- Narendra Modi and his Bangladeshi counterpart Sheikh Hasina on Tuesday held an extensive discussion on a range of bilateral issues as they decided to start negotiations on a comprehensive economic partnership agreement (CEPA) to sustain momentum in the bilateral ties.

India and Bangladesh today signed seven Memorandum of Understanding (MoUs) in the presence of PM Modi and visiting prime minister Sheikh Hasina. These agreements were signed after delegation-level talks were held at the Hyderabad House.
Speaking at a special briefing here, Indian foreign secretary Vinay Mohan Kwatra, said both leaders agreed to build resilient supply chains in both countries and across the region.
“India is the largest market for Bangladeshi products in Asia. “And despite the pandemic, the bilateral trade between the two countries reached an all-time high of USD 18 billion in the last financial years,” he added.
“To sustain this momentum, both leaders have directed the concerned ministries to commence negotiations on a bilateral comprehensive economic partnership agreement (CEPA) this year in 2022 and complete it in time for Bangladesh’s final graduation from the LDC status,” he added.
Both leaders also exchanged views and perspectives on regional and global issues. The foreign secretary informed that there was a strong agreement between the two leaders on the significance of further strengthening bilateral, and subregional cooperation to sustain prosperity in these challenging times.
“Both prime ministers held extensive and productive discussions on the entire range of bilateral issues including political and security cooperation, energy partnership, water corporation, trade and economic ties, development partnership and strengthening people-to-people ties. They also exchanged views and perspectives on regional and global issues,” Kwatra said.
Both leaders unveiled and inaugurated important development projects including Unit I of the joint Maitree power plant and Rupsha bridge and witnessed the exchange of seven MoUs in the areas of water resources, capacity building, railway, science and technologies.
Highlighting the key issues that came under discussion, the Indian foreign secretary said both leaders emphasised the importance of security cooperation, counter-terrorism, and cross-border crimes.
“Both leaders underscored the importance of continuing our close security cooperation in the fields of counter-terrorism, border management, and cross-border crimes. They agreed to further enhance our development partnership including upgradation of railway infra projects in Bangladesh,” he said.
“Bangladesh is one of India’s important development partners both in terms of value and concessionality of terms and the range of cooperation in the entire spectrum of the development partnership,” he added. (ANI)