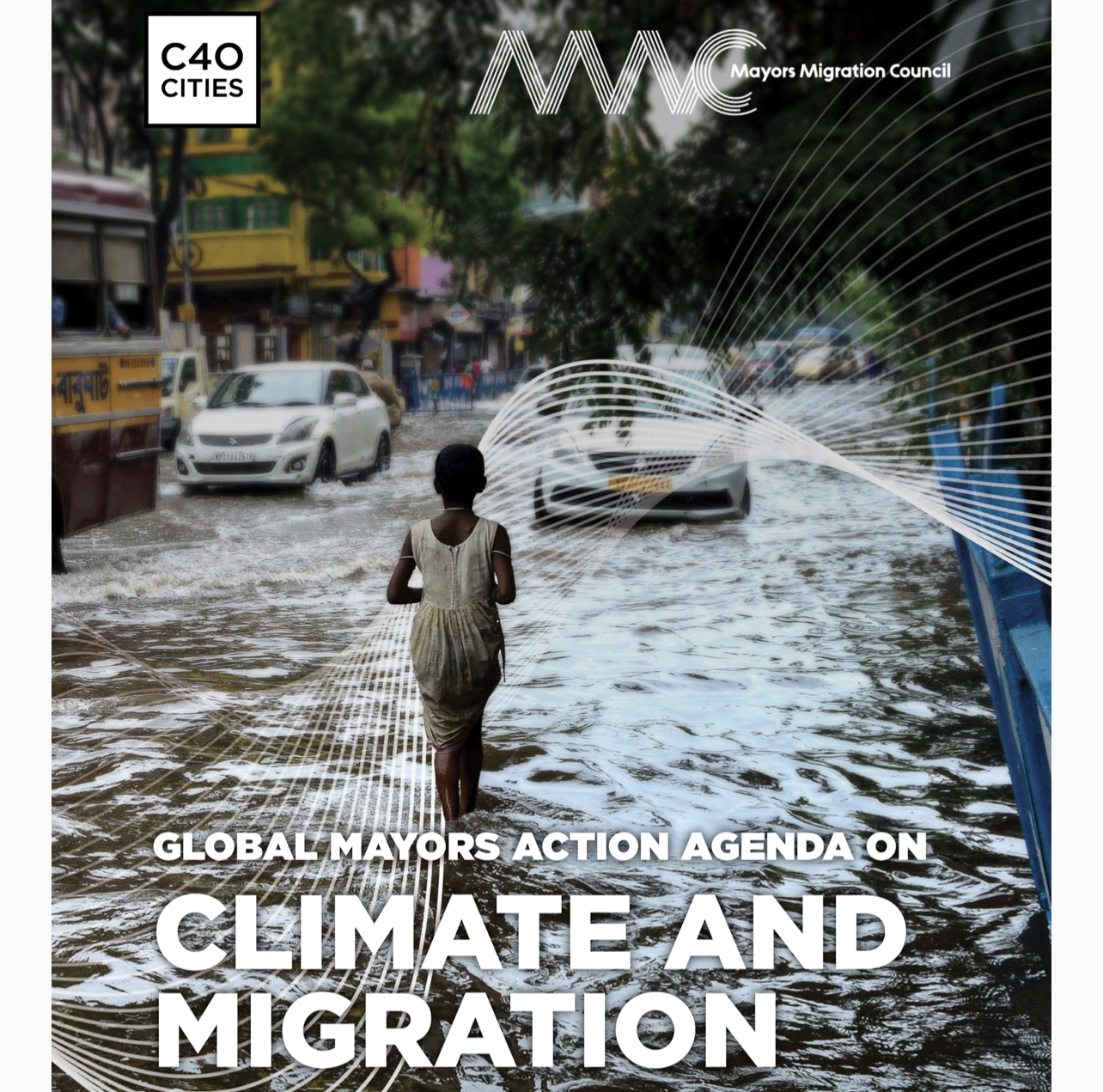 London — Mayors from around the world will convene in Buenos Aires today to prioritise climate-related induced migration ahead of COP27 and ensure that the needs of people forced to migrate can be met by local services.

There is unequivocal evidence that global warming and its impacts are increasingly forcing people to leave their homes in search of safety and better livelihoods. Research shows that up to 1 billion people could be displaced by the climate crisis by 2050. Most of these journeys will lead to cities.

Today, mayors are calling on national governments to accelerate responses to climate migration, by increasing adaptation finance to 50 percent of total climate finance — following the lead of the UN Secretary General, and to make sure that these resources are directed to vulnerable Global South countries and cities — something which current Chair of C40 Mayor Khan has made a priority.

Countries in the Global South – which have contributed the least to climate change throughout history – are most severely affected. From unprecedented flooding in Pakistan and Bangladesh, to protracted drought in the Horn of Africa, it is becoming increasingly clear that the climate crisis will force people to move and that climate change and migration can no longer be tackled as separate issues. For example, 33 million people were affected by flooding in Pakistan between August and September this year, and cities across the country were not only severely impacted but served as a place where people sought immediate shelter and relief.

Cities and mayors are on the frontline of supporting people displaced by climate change. They are mobilising at scale to meet demand on services and to tackle deep-rooted inequalities.

The Global Mayors Task Force on Climate and Migration was launched by C40 and the Mayors Migration Council in June 2021 to raise awareness about the urban dimension of climate and migration and accelerate global, national and local responses to these challenges. In line with its Action Agenda, released at COP26, C40-MMC mayors are already delivering bold action to increase resilience in the face of climate risks, foster inclusion for those forced to move in the context of the climate crisis and ensure no one is left behind in the green transition.

C40 Chair and Mayor of London, Sadiq Khan, said: “As chair of C40, one of my priorities is taking urgent action to address the causes and devastating human cost of forced migration created by the climate emergency. By cutting emissions and improving energy efficiency we can avoid the worst impacts of climate change while creating new growth and job opportunities in our cities. In London I am working towards doubling the size of London’s green economy by 2030. All over the world, people are already being forced to move due to the climate crisis. Mayors are taking urgent action to address these issues, but we cannot do it alone. Cities need more funding and powers from national governments to urgently address the climate emergency at a local level.”

Mohamad Atiqul Islam, Mayor of Dhaka North and C40 Vice-Chair on Migration, said: “With 2.000 people moving to Dhaka every day, mainly because of climate impacts, my city is a clear example of the fact that mayors are at the frontline of climate migration challenges. Right now, only 10% of international climate adaptation finance reaches the local level. As we approach COP27, we’re calling on our national leaders to increase investments in locally-led adaptation and make sure that a significant part of resources are directed towards the most affected communities and cities.”

Barrister Murtaza Wahab, City Administrator of Karachi, said: “The magnitude of flood-induced displacement that we witnessed in Pakistan, earlier this year, is well beyond even the most grim scientific projections. Urban areas have been at the frontline of both climate impacts and of welcoming people displaced by flooding. Urgent international action is needed to increase resilience and preparedness in the face of these events, and cities need to be at the forefront of these conversations.”

Freetown Mayor Yvonne Aki-Sawyerr said: “Whether at the origin, transit point or destination of climate-related migration, it becomes clearer everyday that cities are both at the frontline of challenges and at the forefront of scalable solutions. As we approach COP27 in Egypt, the C40-MMC Task Force provides an opportunity for mayors from across the world to speak as a united front and call on the international community to ramp up financing for climate adaptation, while making sure that a significant part of these resources are directly channelled to cities.”

Amman Mayor Yousef Al Shawarbeh said: “Amman’s successful engagement with international donors aims at expanding green job opportunities for both Syrian refugees and Jordanians and presents a model for how to close municipal finance gaps worldwide. I look forward to sharing this experience with fellow mayors of the C40-MMC Task Force and working together to lead an inclusive green transition for and in partnership with urban migrants and climate affected communities.”

São Paulo Mayor Ricardo Nunes said: “The city of São Paulo is fully aligned with C40 goals, even exceeding them in some aspects, such as in its green coverage, currently around 48% of the city’s total area. We have one of the largest programmes in the world for tackling the climate crisis and a comprehensive Municipal Plan for welcoming migrants, which qualifies us to actively participate in the C40-MMC Task Force on Climate Migration.”

Milan Mayor Giuseppe Sala said: “C40-MMC mayors are demonstrating that addressing equity does not mean delaying climate action, and that the green transition provides an unprecedented opportunity to combine the social and the economic inclusion of newcomers in our cities, with benefits for the wider community. As 70 percent of migrants and refugees already live in urban areas, more public and private investment is needed in cities, to create green and good quality jobs that increase the health, wellbeing and economic opportunities of urban citizens and are accessible to all.”

Los Angeles Mayor Eric Garcetti said: “The C40-MMC Task Force’s leadership and diplomatic engagement during COP27 and the upcoming Cities Summit of the Americas will be instrumental in guiding the US government’s implementation of President Biden’s PREPARE Plan. We must ensure adaptation and resilience finance is leveraged to tackle climate drivers of migration – in the US, but especially in Global South countries and cities that bear the disproportionate brunt of climate impacts.”

Mayors Migration Council Executive Director Vittoria Zanuso said: “Climate migration to cities may become the new normal, but it does not need to become a crisis. Mayors are ready to step up as problem solvers but they cannot do it at scale without adequate funding. As national governments head to COP27 in November, they must fix the broken $100-billion promise of climate finance by investing in urban adaptation, investing in frontline communities, and investing in the Global South.”

C40 is a network of nearly 100 mayors of the world’s leading cities who are working to deliver the urgent action needed right now to confront the climate crisis and create a future where everyone, everywhere can thrive. Mayors of C40 cities are committed to using a science-based and people-focused approach to help the world limit global heating to 1.5°C and build healthy, equitable and resilient communities. Through a Global Green New Deal, mayors are working alongside a broad coalition of representatives from labour, business, the youth climate movement and civil society to go further and faster than ever before.

The current Chair of C40 is Mayor of London Sadiq Khan; and three-term Mayor of New York City Michael R. Bloomberg serves as President of the Board. C40’s work is made possible by our three strategic funders: Bloomberg Philanthropies, Children’s Investment Fund Foundation (CIFF), and Realdania.

About the Mayors Migration Council

The Mayors Migration Council (MMC) is a mayor-led coalition that accelerates ambitious global action on migration and displacement. With most of the world’s migrants and displaced people living in cities, our mission is to use the power of city diplomacy and practice to create a world where urban migrants, displaced people, and receiving communities can thrive.

Created by mayors for mayors, we are a nimble team of political advisors and urban practitioners led by a Leadership Board of global city leaders, including the mayors of Amman, Bristol, Dhaka North, Freetown, Kampala, Los Angeles, Milan, Montevideo, Montréal, and Zürich. We are managed as a sponsored project of Rockefeller Philanthropy Advisors and operate with the institutional support of the Open Society Foundations, the Conrad N. Hilton Foundation, the IKEA Foundation, the Swiss Agency for Development and Cooperation, and the Robert Bosch Stiftung, in addition to other project-based donors.