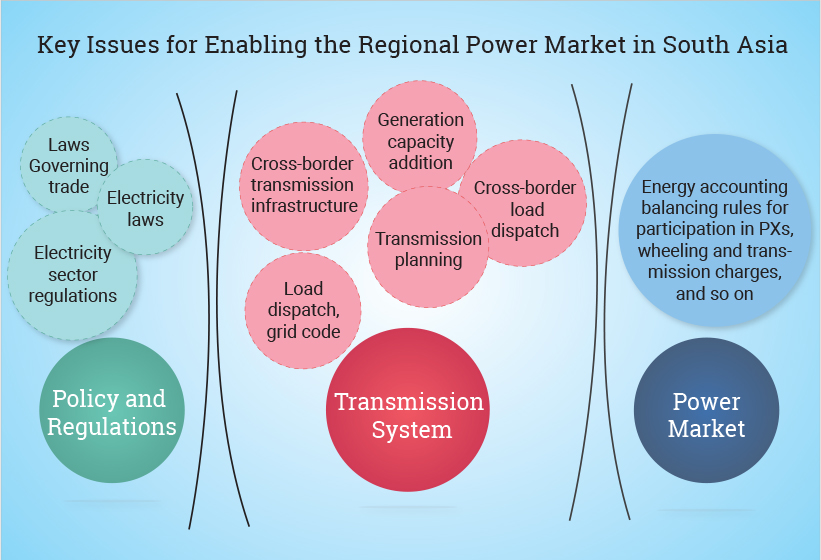 South Asia is home to more than 1.6 billion people. It is the world’s fastest growing region, with the highest growth rates in the consumption of commercial energy. Demand for electricity in South Asia, particularly in Bangladesh, Bhutan, India and Nepal (BBIN) countries, is projected to increase three times in the next 15-20 years.

Still, with an average per capita electricity consumption of 560 kWh at present, the region lags behind the global average of 3,000 kWh.

South Asian countries are confronted with the challenge of securing energy to sustain rapid economic growth and meeting the rising aspirations of its populations. Despite being rich in natural energy resources like sunshine, wind and water, they are witnessing a growing imbalance between the demand for energy and its supply from indigenous sources due to fluctuating weather conditions, resulting in increased import dependence.

The situation calls for enhanced energy trading in the region through a unified grid. India has a mix of coal, sunshine and water. Natural gas is the most important fuel for Bangladesh, while Nepal and Bhutan are rich in hydro resources.

Similarly, during freezing winter months, when power output from hydro resources drops significantly, Nepal and Bhutan can meet their energy deficits with imports.

The huge renewable energy potential that India is adding can also be capitalized by neighbouring countries through grid interconnection.

“Energy security, interdependency or using resources in a much more comprehensive manner by integrating the power structure will benefit each other,” said Ajay Kumar Bhalla, Secretary, Ministry of Power, Government of India, speaking at the South Asia Power Summit 2018.

However, achieving energy security in South Asia has a number of challenges. One of the biggest is maintaining transparency and accessibility in terms of trade, where there is an intrinsic interplay of factors like the political economy, natural resources, infrastructure, foreign policy matrices and international relations.

The challenges can be overcome and opportunities explored only through regional cooperation. A coordinated and comprehensive policy, along with regulatory interventions, is the need of the hour to meet the growing energy demand in the South Asian region of BBIN.

In fact, “if we draft the policy carefully, the entire energy need of the region can be met by renewable energy,” said Manoj Kohli, executive chairman, SB Energy-SoftBank Group, India.

Transmission connectivity is the minimum requirement for energy sharing. Some initiatives have already been taken at various levels for grid connectivity. India-Nepal, India-Bhutan and India-Bangladesh are already connected to some extent, and there exists some trading/power exchange mechanism.

Now there is a need to work towards connectivity beyond the border countries, e.g., Nepal-Bangladesh or Nepal-Bhutan or Bhutan-Bangladesh, for the effective and optimal utilization of energy resources.

Ved Mani Tiwari, CEO-global infrastructure, Sterlite Power Grid Venture, stressed the need for energy storage so as to create an Internet of Energy – just like the Internet which has servers that anybody can use.

Highlighting the importance of energy storage, Rashi Gupta, director at Vision Mechatronics, said, “Energy storage plays a significant role to compensate for the sunlight time shifts and maintain stable and sufficient power feed into the grid. With such huge power levels, we cannot neglect efficiencies as even a 1% change in efficiency could bring about a drastic impact on the grid.”

“Very soon India’s national energy storage mission and electric vehicle revolution will be implemented, where vehicle-to-grid would be a reality. We all have to be prepared for this. Many good storage technologies like Lithium batteries, flow batteries, fuel cells and air based energy storages can be deployed, which can help us achieve the dream of South Asia unified grid,” she added.

“At present, India exports around 350 MW of power to Nepal and 660 MW to Bangladesh on a daily basis. Between India and Myanmar, there is small trade of 3 MW power. Efforts are on to further strengthen it. Between India and Bhutan, there are existing arrangements for importing 1,350 MW of hydropower from Bhutan. Transmission system for almost the same amount of power is being implemented,” said Bharati, joint secretary, Ministry of Power, India Government.

“Efforts are on for the proposed interconnection between Madurai in India, and Sri Lanka,” she added.

Highlighting that India can have more interconnections at high voltage levels, Bharati said, “India is at the center of South Asian region. So it has got the advantage due to its size and position. Also, India has expertise in developing high voltage DC and AC lines. This is already being utilized for effective planning in neighbouring countries also.”

India is also keen to increase its hydro power investments in Nepal and Bhutan, as it looks to increase cross-border electricity trade and energy security with the neighbouring countries. This will also complement India’s huge investment in renewable energy.

“India will give all its assistance to Nepal and Bhutan in the field of hydro power. Already, a lot of Indian companies have established their presence in these two countries. Going forward, investments will only increase,” said Ajay Kumar Bhalla, Secretary, Ministry of Power, and Government of India. ( from Pvmagazine )