Why Nepalese wear hat on 1st of January? Story of Nepali hat 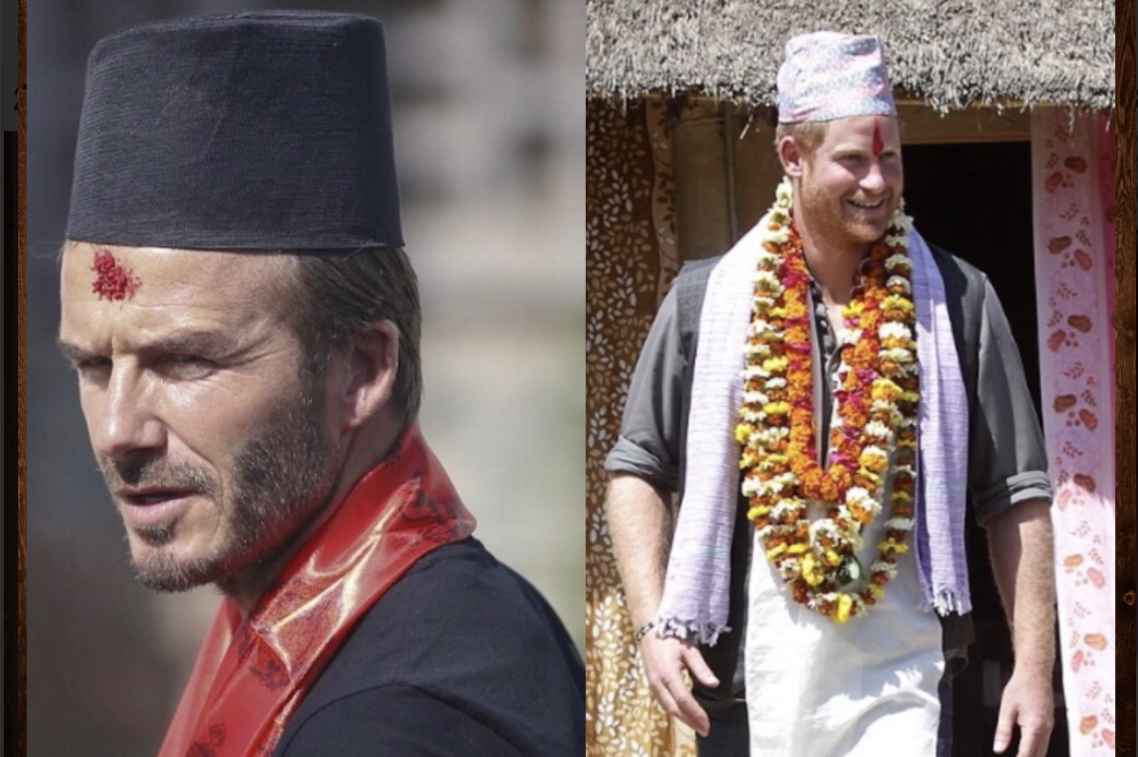 Nepali hat is regarded as the symbol of Gorkhali pride.
Some Nepalese consider hat as the symbol of Mt Everest , the highest peak of the world( roof of the world ) the pride of Nepalese too.
Human head itself is considered as the respected and vital part of human being , when you keep something on the top of your head,  the object itself should have a greater value, hence hat in Nepal is regarded as the pride and prejudice of an individual.
Two major types of Nepali hat : 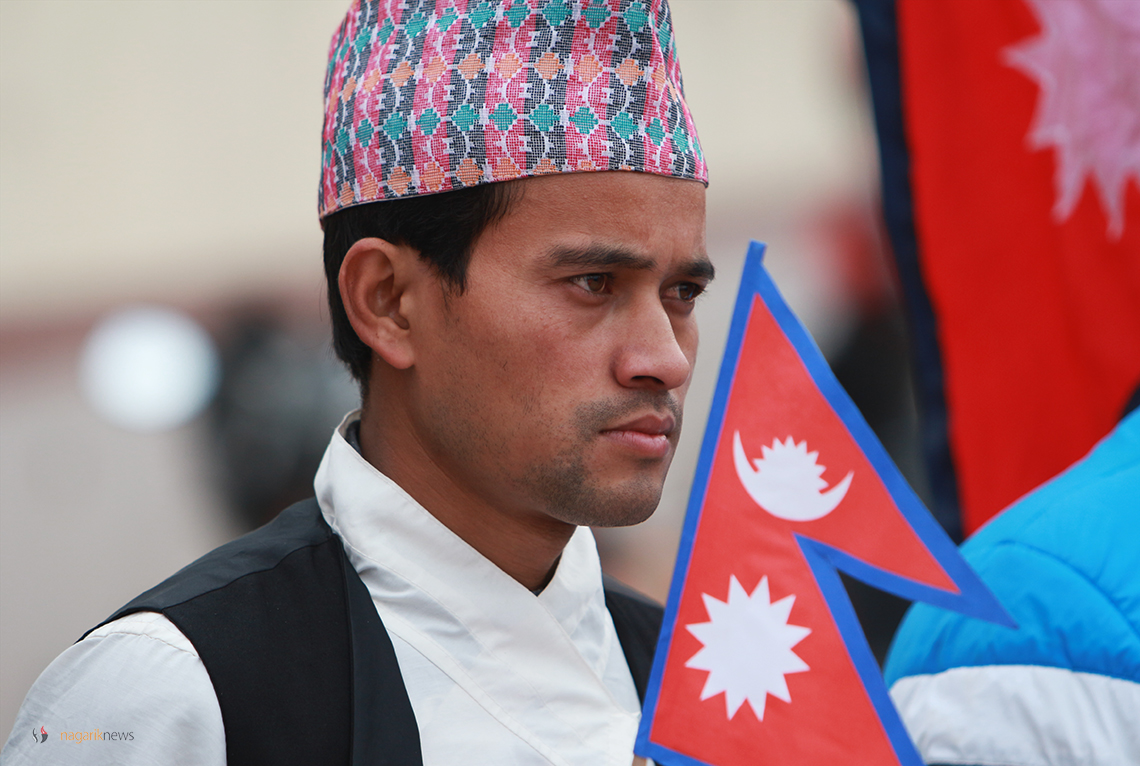 The Dhaka cap
This cap is made out of a type of cloth called, “Dhaka.”  This is because in the olden times during the British Raaj, the cloth was solely manufactured in Dhaka of the then British Bengal and transported to Nepal. The material was highly sought after. Hence the name “Dhaka topi.”
The term ‘Dhaka’ is used to refer to both the fabric and the geometrical patterns of varied designs and colors, its unique essence. Some say the fabric is called Dhaka because it is fully covered with the pattern, from the Nepali verb dhaknu, ‘to cover’. Others say that a more credible version is that the term comes from the name of the capital city of Bangladesh. The geometrical Dhaka pattern is apparently quite similar to the pattern found in a highly popular jamdani cloth traditionally woven by Bangeladeshis in villages in and around Dhaka. It is quite possible that in a visit to India or Bangladesh some influential Rana noticed nawabs wearing jamdani cloth; then, fancying himself in it, he placed an order, and thereby introduced Dhaka cloth to Nepal 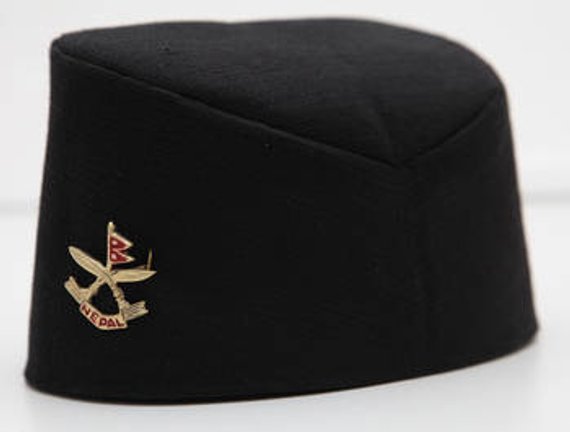 The Bhadgaunle cap
There is another variant of the Nepali cap. The Bhadgaule cap is made of sterner material which is black in color. This is because the coarse material was readily available unlike the “Dhaka” cloth which was more expensive and difficult to procure.

This cap got its name from the place where it originated- Bhadgaun or Bhaktapur in the Kathmandu valley.

The Bhadgaunle Cap (Number 2) originated with the Newari people of Kathmandu, presumably influenced by their interaction with the Khas people of West Nepal. The Mallas, who were the rulers of Kathmandu valley were originally Khas but gradually adopted the more cosmopolitan ways of the Newars and became Newars over time.

The Dhaka topi (Number 1) is a communication of the Kashmiri and Himachali styles of headwear. The styles were slightly tweaked as it moved from Kashmir to Himachal to West Nepal. The people who brought the cap to Nepal are what are known as the Khas people who migrated from Kashmir to Nepal.

Now the Dhaka topi has become synonymous with Nepali identity, especially among the people of the hills of Nepal.

When was Dhaka topi came in to existence ?

During Panchayat times, all high-ranking officials were required to be in the national attire and all other office staff had to be wearing at least a Nepali topi. According to a retired government official, those among the lower category of staff who did not want to buy a Dhaka topi could lease one for one rupee from one of the nearby stalls selling cigarettes and beetle-nut. Then they’d wear it during the office hours and return it back at the end of the day.

The nationalist fervor attached to the daura surwal and Dhaka topi was at its peak during Mahendra’s rule (1955-1972). D1) The Dhaka topi.
Why Nepali wear  hat on 1st of January  ?
A social media campaign to wear Nepali hat and feel proud and to promote nationality was started during 2009. It was led by some some youths  and automatically became a tradition to post picture wearing Nepali hat. Some people started calling it as a Nepali topi Diwas which means Nepali hat day.
Why is it important to celebrate this day ?
Although there is a great value of culture itself some of the importance can be discussed as follows :
– Nepali hat promotes Nepali culture and identity.
– Nepali hat industry , Dhaka industry will get economic benefit from the increasing demand of hat.
– People worldwide will know about Nepali hat and help to ignite their curiosity about Nepal and Nepali .
– Help to promote tourism of Nepal.
– Helps to bridge the gap between generations.  The senior generation can take advantage to introduce their cultural attire to new generation and make them feel proud on their identity.
– Give sense of equality –  all people can were same hat,  poor and tech people everyone can afford it. When everyone we’re same hat it gives sense of equality.
The reason the Nepali people wear the cap all the time is because it has now become a strong part of Nepali identity for all ethnic groups in Nepal, not only the Khas.
The Dhaka topi has become a symbol of Nepali identity, pride and honorableness and nobleness in men. That is why men of Nepal wear the Nepali cap all the time.
Why should Nepali were Nepali hat made in Nepal ?
Even today the Nepalese Dhaka industry faces setbacks, not because of quality but because of the speed at which it can be produced in India. The Indian producers can meet demands of any size at any time with the use of a special jacquard machines, while Nepalese producers still tend to favor the slower hand looms. The Indian cloth is also comparatively cheaper, while the purely hand made Palpali Dhaka is more expensive. According to Nepalese entrepreneurs, there are than 200 Indian traders producing Dhaka cloth south of the border in the towns of Gorakhpur and Sunauli. Their export to the Nepal market is distressing to both the established and aspiring Nepalese entrepreneurs on this side of the border. If the government wants our industry to survive, the traders say, it should impose high tax on the import of Dhaka cloth from India and, at the same time, remove the tax on the import of thread to Nepal.

The Nepali topi and daura suruwal may not be the first things those familiar with Nepal will recall when they hear about the country, but when they see the dress, they  undoubtedly think of Nepal and Nepalese before anything else.