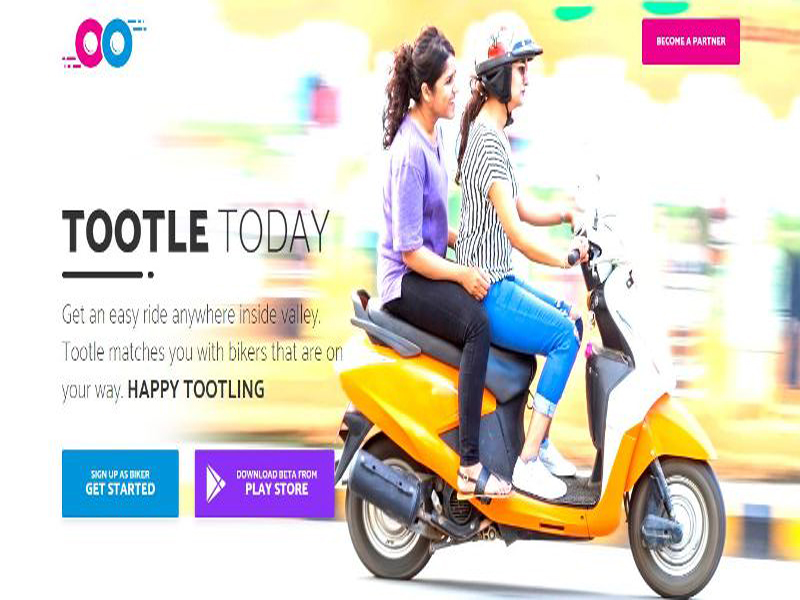 Kathmandu : In a massive traffic jam of Kathmandu valley a new concept of entrepreneurship has been flourished as Uber taxi app has taken the market in Europe and America.

A mobile app called Tottle which is developed by local youth in Nepal is gaining its popularity due to its innovative feature of sharing a motorbike to travel. An alternative taxi concept to 4 wheeler taxi dominated the market in Kathmandu is being popular.

Due to the risky nature of travel, health & safety and legal issues, it is said that the government has kept its supervision due to some of the case registered against earlier this week.

Metropolitan Traffic Police Division has started taking action against motorbikes giving rides to the people through ride-hailing apps such as Tootle and Pathao, saying that the service providers were charging money from customers which is against the law.

Following the complaints, the MTPD had asked the Department of Transport Management regarding the legal status of bike sharing service. In response, the DoTM said that the Tootle and Pathao were not registered at the office.

According to Section 8 of the Transport Management Act 2049, vehicles registered for private purpose cannot be used as a means of public transportation.

SP Sapkota said that they started taking action after finding that the ride sharing apps were not registered at the department. He said police impounded five motorbikes and arrested their riders operating the bike hailing service on Monday. The bike riders were fined Rs 1,000 for violating the law.

Local startup Tootle has attracted a growing number of young and tech-savvy commuters to its motorbike-sharing service, which is five times cheaper than traditional taxis, since its launch in early 2017. It now operates in three cities in the Kathmandu Valley where about 4 million people live. Nearly 10,000 taxis operate in the valley and the industry generates roughly 17 billion Nepalese rupees ($162.6 million) annually.

But as the population in Nepal becomes increasingly connected digitally, the potential for Tootle also extends elsewhere.

Tootle is also planning to expand to the cities of Narayangadh and Pokhara within six months, with the ultimate aim of setting up abroad. More than 50,000 users have downloaded the app, which on average provides 700 rides a day, Tootle says.

Sixit Bhatta, the 37 year old co-founder of Tootle, which employs 16 people in its glass-paneled office in  Kathmandu, said it was easier for locals to use motorbikes. “There are almost half a million motorbikes in the [Kathmandu] valley. It is the most convenient mode of transport to get around,” he said.

Bhatta and his two co-founders, who declined to specify their initial investment, were in part inspired by what they saw during an Indian embargo in 2015 that led to the disruption of supplies in this Himalayan nation. Then, Nepalese pooled resources and shared rides.

“Sharing taxis is an existing behavior, but bike-sharing is new. Our service, though, is ideally suited to navigate the traffic-choked streets,” said Bhatta, a former telecommunications engineer. “Transportation is a big problem here … We lack freedom of mobility.” Bhatta added.

Around 40% of Tootle users are women, according to Bhatta, a pool that could increase over time as women avoid crowded public transportation systems, which includes buses, minibuses and three-wheelers, such as rickshaws. A 2014 survey by the World Bank found that 25% of women aged 19-35 have experienced “inappropriate touching” while traveling on public transportation in Kathmandu.

The Tootle app gives users the option to choose between male and female drivers, even though it currently has only male drivers. But Tootle intends to change that. The company has signed an agreement with an organization promoting women’s employment to train female chauffeurs. For the handicapped, motorbike-sharing is also easier than getting on cramped buses.