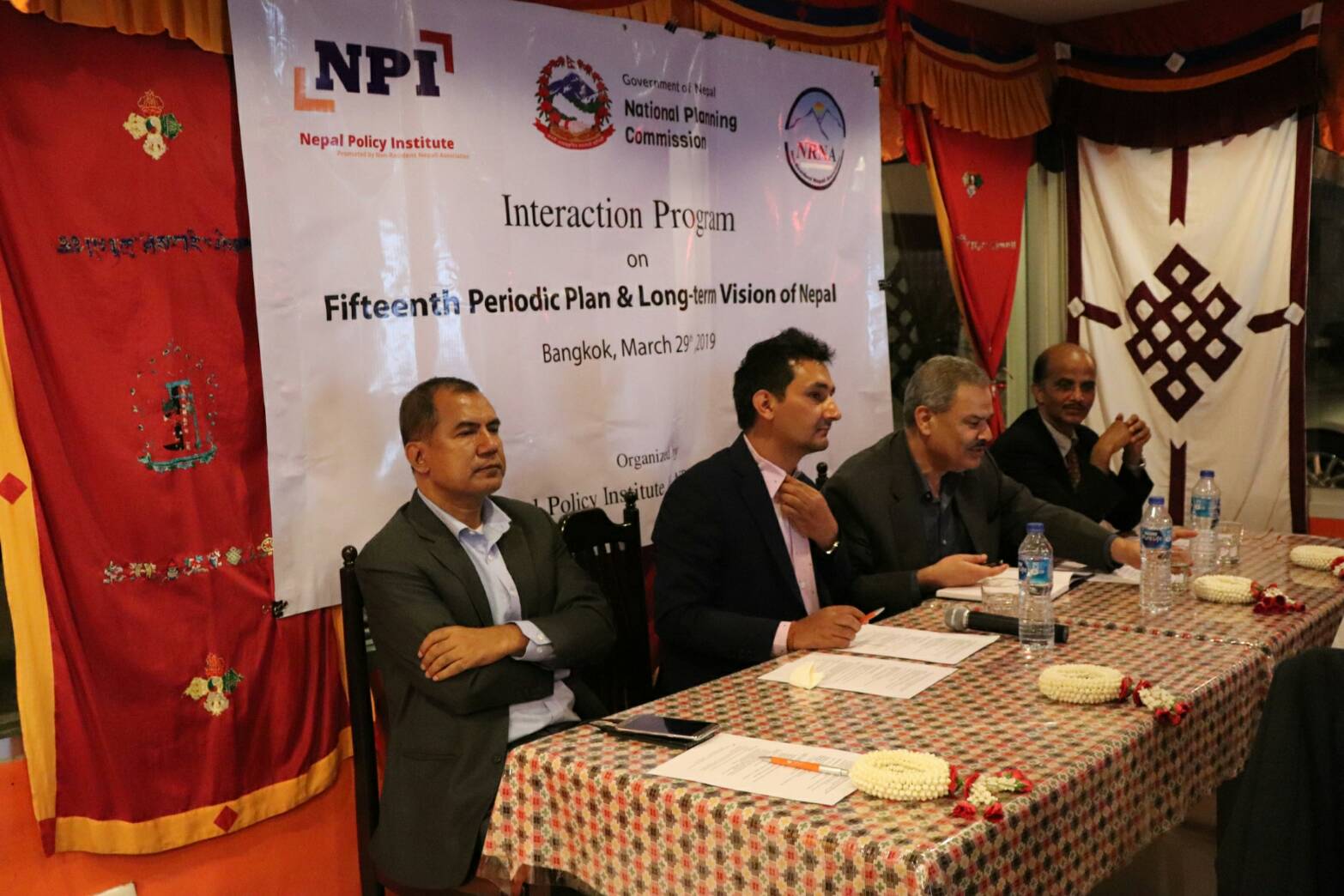 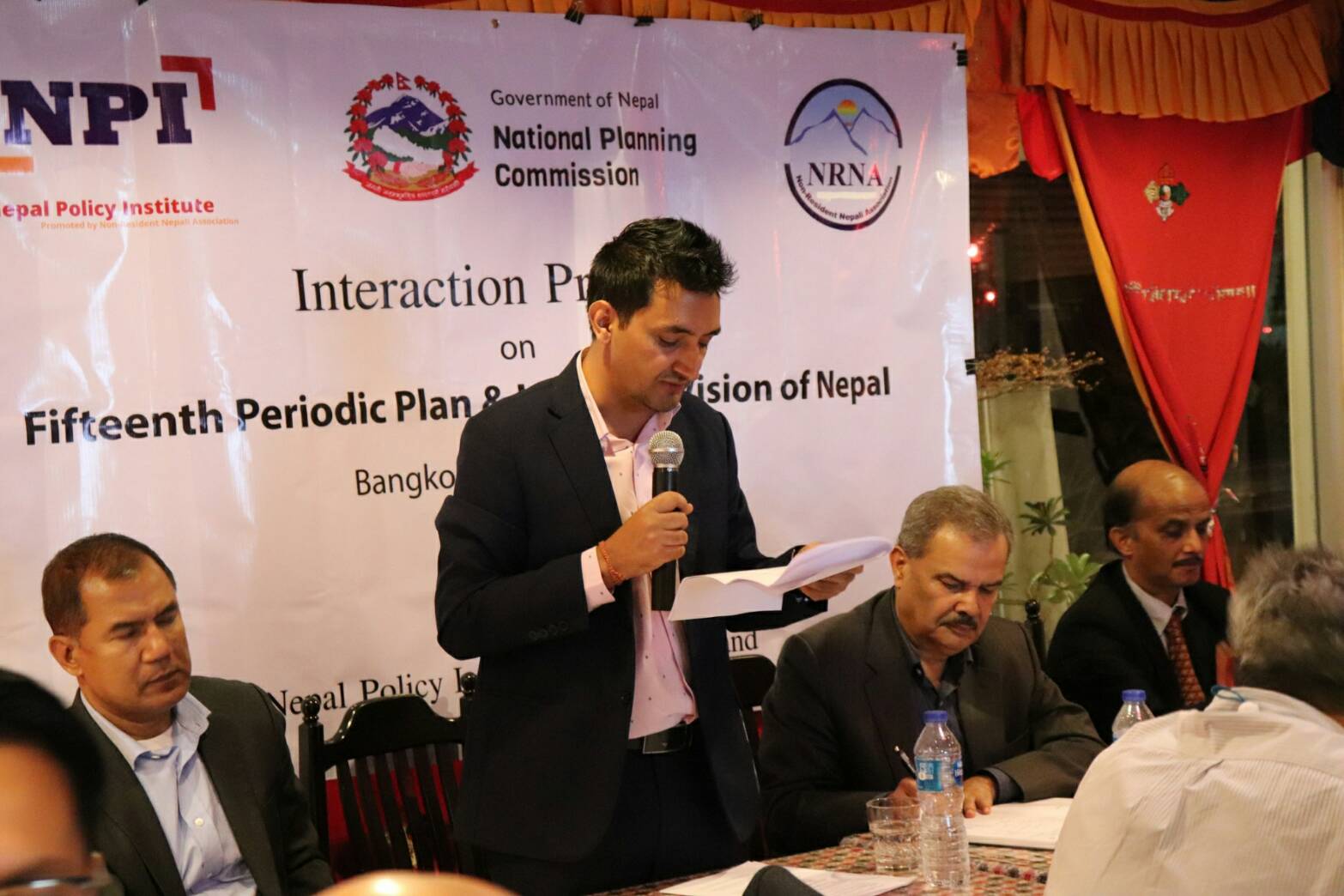 According to NPI member Ramesh Singh, the program was a part of NPI’s effort in collecting inputs from global Nepali diaspora for 15th periodic development plan and long-term vision of Nepal as requested by NPC some 3 weeks ago. There was virtual interaction held among America based professional a week before for the same purpose.

In the beginning of the interaction, NPC Joint Secretary Khom Raj Koirala gave a key note on the overview of NPC prepared draft approach paper for 15th Plan and long-term vision plan in all sectors. Koirala said that there are many consultations program held in Nepal from local to National level to develop a draft that NPC shared to NPI earlier. Koirala mentioned that in the context diaspora would be critical to finalize the draft for which NPI was the right channel as NRNA has set up NPI for the same purpose. He explained that the current consultation was for NPC approach paper and it may take almost a year to finalize the whole plan and NPC intended to engage NPI from the early stage. 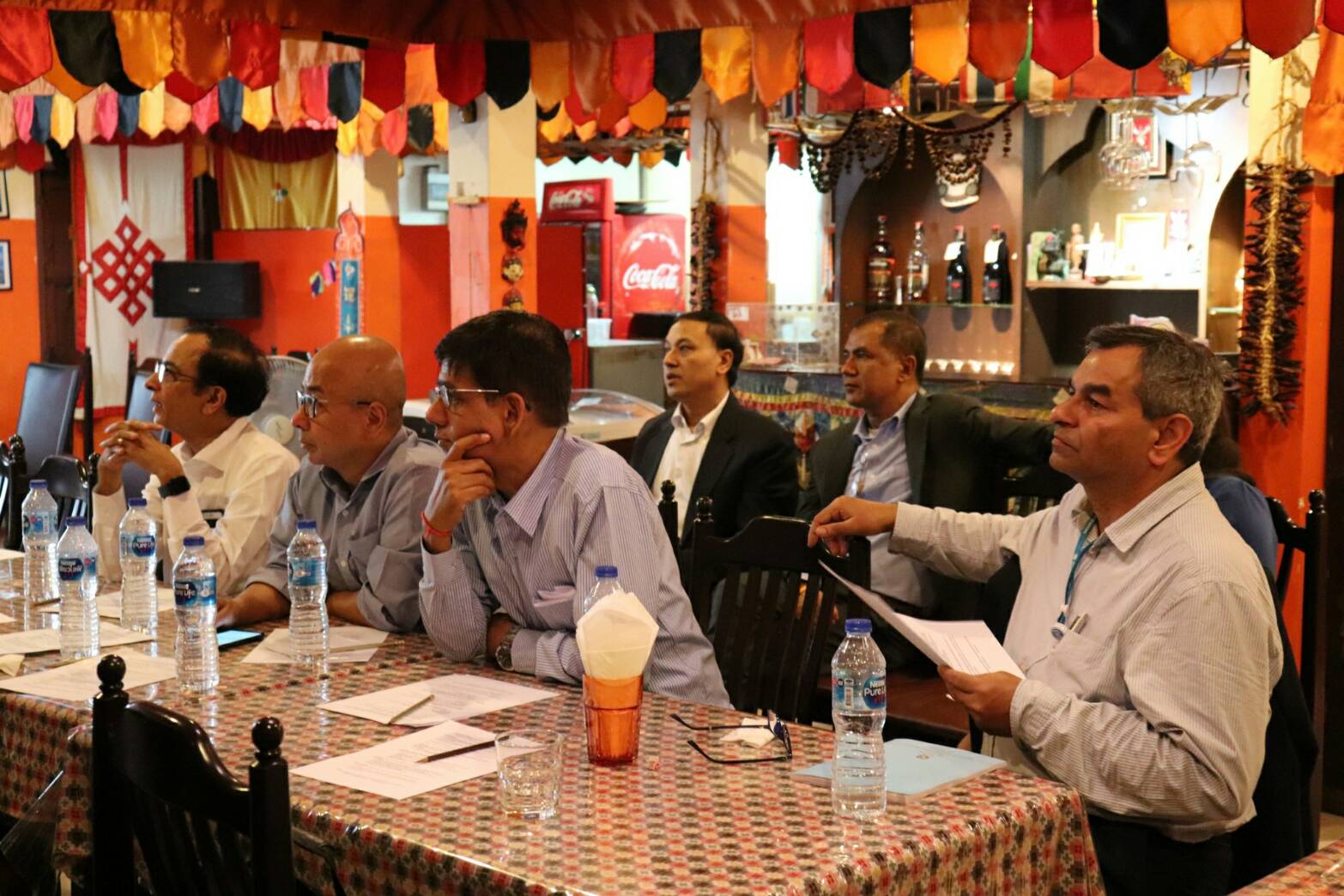 Following the NPC’s presentation, NPI Chair Khagendra Dhakal gave a keynote presentation sharing the major points that were drawn through the global consultation to shape the Bangkok based interaction effectively. Dhakal presented nine different problems and their solutions in response to draft plan of NPC, NPI Chair Dhakal also recommended a new theme Build-Produce-Manage-Monitor (BPMM) for the consideration of NPC to adopt in the upcoming plan and vision. He described the BPMM theme as follows:

(1). Build Physical Infrastructure and Improve Cross-Border Transport System with neighbors. These are the major barriers to developing Nepal’s market into a competitive economy in the region and globe. Private builders should be encouraged for investment in the development of infrastructure. Without industrialization and manufacturing no nation can achieve economic prosperity and this is not likely without improved physical infrastructure, transportation convenience and ease in cross border trading.

(2). Produce Agricultural Farm Commodities to bridge the gap in supply shortages and food imports and to reduce higher prices. This will ensure better choices for consumers with adequate supply at a reasonable cost contributing to market boost that would have a multiplier effect in the economy. The government should continue with long-term agriculture perspective plan vigorously and monitor implementation of the plan.

(3). Efficient Management of Water Resources, including reforestation, soil conservation and expand solar energy. This should be re-energized with new vigor in the plan. Providing safe drinking water supply should remain on top agenda while building small water reservoirs by tapping on rain waters for both household and small-scale irrigation purposes also to be promoted.

(4). For the effecting Monitoring of the implementation of plan and measure the desired outcome of the plan and vision, NPC should be rebranded with clear mandate of authority.

NPI Chair Dhakal, currently working as Specialist at King Monkut’s University of Technology in Bangkok, emphasized on the need of pragmatic policy with tangible outcome and powerful monitoring mechanism. He further stressed that without such mechanism in place, the next development plan otherwise will be merely an another plan to add in the list of past 14 plans. Dhakal indicated that NPI’s final input including the comments from Bangkok interaction will be a good reference for NPC to consider for incorporation in the plan documents. NPI gives an angle on how diaspora Nepali will see the development scenario rolling up in Nepal.

Giving a closing remark as the chief guest of the program, NPC VC Puspa Raj Kadel responded to all the queries and comments and noted them as realistic concerns to accommodate. He told that NPI has identified problems, given solutions and also added new ideas which is what NPC appreciates the most. As a conclusion, NPC VC committed to incorporate the comments and requested NPI to forward the consolidated input from the global consultation at the earliest. VC also invited NPI’s regular input to the different phases of drafting the plan and vision document as a long-term partner.

Speaking the interaction, NPI EC member Ramesh Singh told the participants that NPI was conducting global consultations with Nepali professionals, migrant workers, students, different specific committees of NRNA for past 3 weeks. Singh, the Former ActionAid CEO also clarified that NPI is an official entity of NRNA as enshrined in the constitution of NRNA, however, it behaves as an autonomous global knowledge platform and think tank for Nepal and Nepali exceeding the normal scope of NRNA. He assured that NPI work will be evidence based and placed in public domain for any stakeholder to use with credit to NPI. Singh added that collective and individual efforts were received from included professional communities, migrant workers representatives, Nepali students based in North America, Europe, Australia, UK, Asia, Middle East and also Nepal based retired professionals of international organizations. He clarified that Bangkok’s interaction was the last event to collect inputs before concluding the consolidated input.

NPI EC Member Rajendra Shrestha had taken the notes of the interaction. Shrestha, also the current Dean at Asian Institute of Technology, said the inputs received from the interaction will be further added to the 1st draft of the input NPI has prepared. A team led by Switzerland based development expert Kedar Neupane had processed the inputs swiftly to prepare the 1st draft and NPI Team is working to give a final touch on the input producing final document. Shrestha also highlighted the importance of human capital that the development plan has to reflect how Nepal will meet the local and national needs of human capital.

Speaking in the interaction program, the Foreign Ministry Joint Secretary Bharat Raj Paudyal appreciated the initiative of NPI that provides multiangle perspectives from the global diaspora which would be a great asset to Government of Nepal. Similarly, Joint Secretary at Ministry of Youth and Sports Ganesh Prasad Pandeya said that policies can never be perfect therefore continuous interaction with diaspora professional which NPI has already started should be continued to reform policies of the nation. He also thanked NRNA creating NPI as a solid platform to get the diaspora’s perspective in development discourse of the Nepal. They were of the opinion that setting up a research institute like NPI is a great achievement of NRNA itself.

NPI has indicated that their final document on input to NPC draft will be forwarded to NPC shortly. NRNA Thailand had hosted the dinner following the interaction. 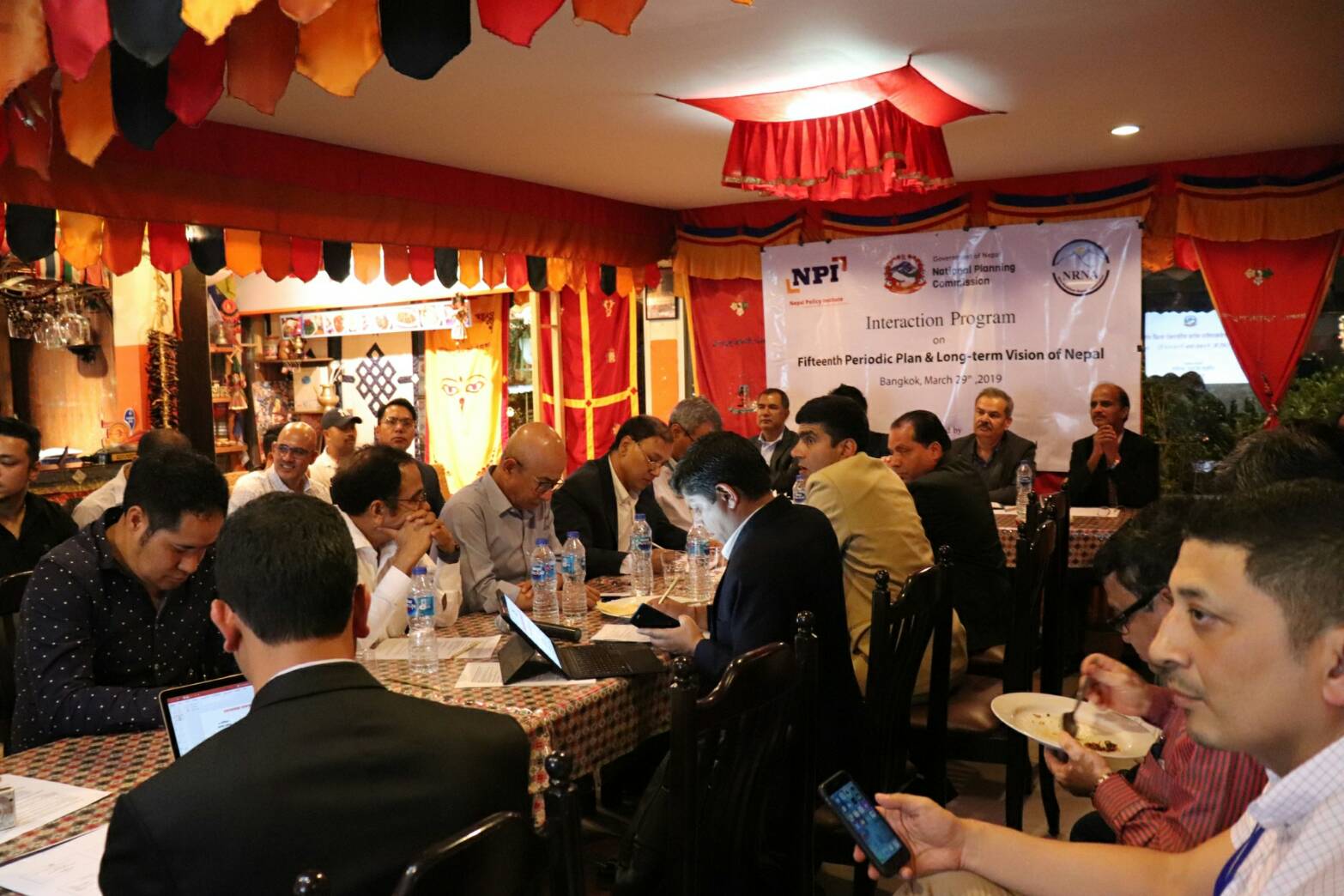