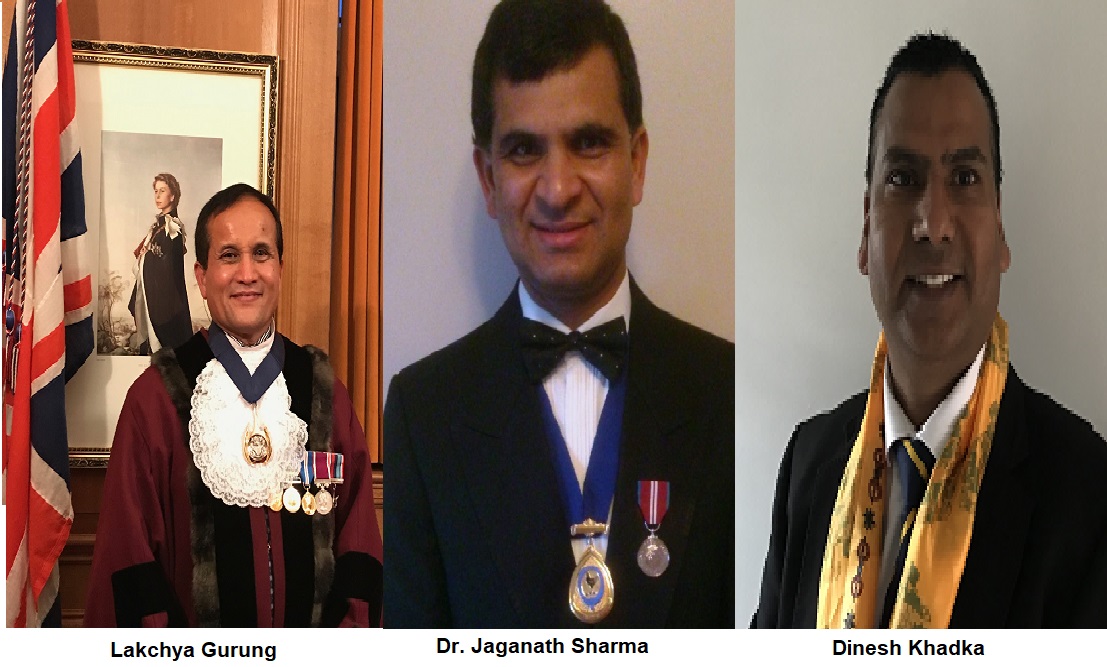 Jagan Karki, London – – The number of British Nepalese taking part in local politics of the UK is increasing in recent days.

While Gurkhas’ contribution to Britain’s national security is widely recognised,  Nepali diaspora in the UK is also contributing to the country’s economy and providing various workforce in skilled as well as semi-skilled sector.

In local elections held on 2nd of May, Dr. Jagannath Sharma was elected as Mayor of North Yorkshire , Colborn Town Council.

Similarly, Councillor Lachhya Gurung from London Borough of Barnet has been elected as Deputy Mayor of the Barnet Council. Gurung was elected as a Councillor from ruling Conservative party during the local elections held last year.

Talking to www.southasiatime.com Mr. Gurung said, “I feel proud and honoured to be first former Gurkha from Britain’s largest and ruling political party, the Conservative Party, to be Deputy Mayor in the most populous Borough Council in the UK. I will proudly represent the greatest Borough and the Nepalese Community in all types of civic engagements. I will also work towards bridging the gap between the local Nepali community and the Borough of Barnet.”

Similarly, Govardhan Silwal “Sagar” has been elected as Councillor for the second term from Dacorum Borough Council of the Hemel Hempstead district. Mr. Tashi Tamang Bhutia has won as a Councillor from Midway, Kent from the Conservative party.

Few Nepali candidates, however, lost in the elections. First Nepali Councillor, Dhana Gurung who was elected in 2007 in Folkestone and Heath District council lost this year. Lila Selling Mabo also lost her election from Heart District of Hampshire. She was a candidate from the Labour Party.

22-year-old Akanshya  Gurung was the youngest candidate from the British Nepalese Community on behalf of the Labour party. But she lost in her bid to get elected as Councillor of the Guildford Borough Council. Akanshya  is the daughter of late Councillor Gam Bahadur Gurung and is quite popular among the youth in her community.

Although many members of the British Nepali community have been participating at the local elections, Councillor Bachchu Kailash Kaini was the first British Nepali who contested in the parliamentary election. An active member of the Labour Party from Dartford, Kaini, however, could not win in the snap elections called by Prime Minister Theresa May in 2017.

“The active involvement of British Nepalese community in local politics in the UK is an encouraging step towards integration,” said Kul Acharya, Vice President of the Non- Resident Nepali Association (NRNA), a global network of Nepalese around the world. “It will also help strengthen Nepali diaspora where they are based.”

The local elections in England, held in the first week of May, elected 8,425 candidates for  248 Councils of England.