Victim of Brexit, British PM says she will stand down on 7th June – South Asia Time

Victim of Brexit, British PM says she will stand down on 7th June 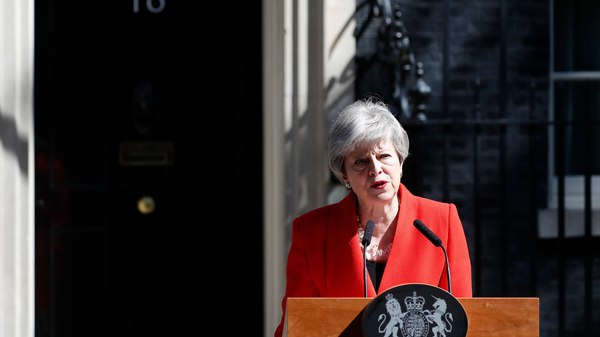 London—In the wake of stiff protests from within the ruling party, British Prime Minister Theresa May has announced that she will resign from her post eary next month.

Addressing media from the 1o Downing Street on Friday, Mrs May said she will quit as the leader of the ruling Conservative party  leader on 7 June.

This will lead to fresh elections within the party who will become the next Prime Minister of the United Kingdom.

In an emotional speech, Mrs May said she had done her best to honour the 2016 European Union referendum result.

She, however, said, “It would remain a matter of deep regret that I have been unable to deliver Brexit.”

“Our politics may be under strain, but there is so much that is good about this country. So much to be proud of. So much to be optimistic about. I will shortly leave the job that it has been the honour of my life to hold – the second female Prime Minister but certainly not the last. I do so with no ill-will, but with enormous and enduring gratitude to have had the opportunity to serve the country I love,” Mrs May said with tears in her eyes.

Mrs May will serve in the capacity of a caretaker Prime Minister until her successor is elected.

Theresa May was elected Prime Minister of Britain in July 2016 after Prime Minister David Cameron resigned from his post following the EU referendum results. British voters chose by a small margin to quit the European Union, also known as Brexit.

Mrs May, right from the beginning, she said ‘Brexit means Brexit’ and that she will deliver it as per the mandate of the referendum. But her political career came to an end when the British Parliament rejected the framework agreement she had negotiated with the EU for record three times.

“I tried three times. I believe it was right to persevere, even when the odds against success seemed high. But it is now clear to me that it is in the best interests of the country for a new Prime Minister to lead that effort,” Mrs May said.

Over the last couple of months, she reached out to the main opposition Labour Party to strike a deal to pass the Brexit deal from the parliament. But influential members of her own cabinet as well as MPs from her own party opposed her negotiations with the Labour party led by Jeremy Corbyn.

In a tweet, Corbyn said Mrs May is right to resign. ….”Whoever becomes the new Tory leader must let the people decide our country’s future, through an immediate General Election.”

Analysts say new Prime Minister will have to walk a tight rope while persuading the parliament to support their deal at the same time selling it to the EU.

“May’s departure will deepen the Brexit crisis as a new leader is likely to want a more decisive split, raising the chances of a confrontation with the European Union and a snap parliamentary election,” Reuters news agency reported.