Theresa May resigns: how the leadership race could play out from here – South Asia Time

Theresa May resigns: how the leadership race could play out from here 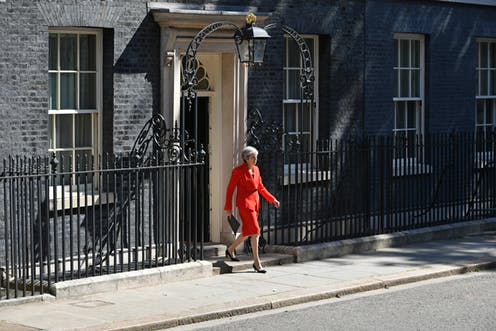 Theresa May’s postdated resignation as Conservative leader and prime minister has fired the starting gun on the contest to replace her. She was forced out after her cabinet revolted over her plans to offer concessions to Labour on a customs union and even a second referendum in her Brexit withdrawal agreement bill. The surprise is not that the prime minister has gone but that it took so long for it to happen.

It’s always difficult for cabinets to overthrow prime ministers, largely because most of the potential successors are in the cabinet and no one wants to damage their chances of taking the crown by looking like a saboteur. In this instance, however, the risks of doing nothing were greater. None of the cabinet’s would-be leaders wanted to be associated with the promise of a second referendum, as it would have damaged their own chances of succeeding May. They finally found their courage when it was in their interests to do so.

May will stay as Conservative leader until June 7 and as prime minister until her replacement is in post – probably in mid-July. But her authority has gone and she won’t be able to achieve anything in that period. From this point onwards, she is a caretaker prime minister only.

How the process works

The Conservatives use a two-stage process to choose their leaders, with both MPs and individual party members participating. In the first stage, Conservative MPs take part in a series of secret ballots, voting on whoever has put themselves forward for the contest. Each MP can vote for one candidate in each ballot and the candidate who wins the fewest votes is eliminated. Candidates are also permitted to withdraw of their own accord at any point.

The parliamentary ballots continue in this way, with the least popular candidate dropping out, until only two candidates are left. These two then go forward to a postal ballot of Conservative Party members (about 125,000 people). The parliamentary ballots can be over quite quickly, within a couple of weeks, but the all-member ballot could take several weeks, depending on the timetable drawn up by the party.

This system creates opportunities and incentives for strategising on the part of leadership candidates and their supporters – and opponents. There is a wide range of opinion on Brexit within the parliamentary party – which includes Remainers and soft Brexit supporters as well as no-deal hard Brexiteers – but no single group constitutes a majority. In contrast, the individual membership is believed to be much more solidly inclined towards a harder Brexit. It suggests that a credible Brexiteer should be able to win the leadership election – provided that he or she can navigate the parliamentary ballots.

The worry for Brexiteer candidates is that their fellow MPs may try to prevent them from finishing in the top two positions in the final parliamentary ballot. This could mean Remainers and soft-Brexit supporters flock behind one candidate of their own. But some could also vote tactically for another candidate to ensure they finish second and ahead of any hard Brexiteer.

Boris Johnson is currently the favourite for the contest, based on his appeal to the party’s grassroots. If he reached the all-member ballot, he would feel confident of winning, given his own pro-Brexit credentials, including the fact that he resigned from the cabinet in 2018 over May’s Chequers plan.

But would Tory MPs work to stop him getting that far? There is a lot of distrust for Johnson among his colleagues. Some have already indicated that they would leave the party if he became prime minister, although such threats are easy to make but not always followed through. At the very least, they could be motivated to prevent Johnson finishing higher than third place, watching the progress of the parliamentary ballots and splitting their votes between two rivals who could beat him.

Johnson’s dilemma explains one of the odder stories to emerge in the press in recent weeks. There has been talk of an alliance between Johnson and the former Remainer, Amber Rudd. This would broaden Johnson’s appeal among Tory MPs and could help him circumvent any organised campaign against him among MPs. For her part, Rudd might believe she would have some influence over the shape of Brexit policy in a Johnson government while preventing another Brexiteer, such as Dominic Raab or Andrea Leadsom, becoming prime minister.

It would, however, be perilous for Remainers to prevent any hard Brexiteer from making it to the all-member ballot because it would infuriate the grassroots. Whereas this might have been risked in the past, doing so now with the Tories haemorrhaging votes to Nigel Farage’s Brexit Party could put the very existence of the Conservative Party in danger. Some have even raised the possibility of allowing more than two candidates to go forward to the members, to ensure a proper choice.

The Remainer/soft Brexit wing of the party will have an array of candidates to choose from, including Jeremy Hunt, the foreign secretary, and Sajid Javid, the home secretary. Other contenders include Liz Truss and Matt Hancock, both former Remainers, although Truss has moved closer to the Brexiteers.

One of the peculiarities of Conservative leadership contests over the years is that the early favourite almost never wins. Margaret Thatcher (1975), John Major (1990), William Hague (1997), Iain Duncan Smith (2001) and David Cameron (2005) all came from behind to take the crown. Even May herself was not the early favourite in 2016 – that was Johnson, whose campaign famously imploded at the start after Michael Gove, his erstwhile supporter, withdrew his backing.

Favourites have often built up enemies to whom their leadership would be unacceptable and the party seeks a unity candidate. On other occasions, the party wants a decisive break with the past. If Johnson fell this time, it could open the door to Raab (break with the past) or Hunt (unity). Gove might also try to claim the unity mantle, though he is now distrusted by Brexiteers after throwing his weight behind May’s withdrawal agreement.

A unity candidate would have to be acceptable to Brexiteers, otherwise the party’s civil war will continue unabated. It is difficult to see how any candidate can win this contest while sticking by the draft withdrawal agreement negotiated by May, with its Irish backstop and other concessions to EU influence. On the other hand, the Remainer, Theresa May won in 2016 after promising that “Brexit means Brexit”. She is resigning now because too many Tory MPs decided that she didn’t mean it. Winning the leadership is one thing; following through on campaign pledges in the context of a hung parliament and the EU’s refusal to renegotiate is another matter entirely.