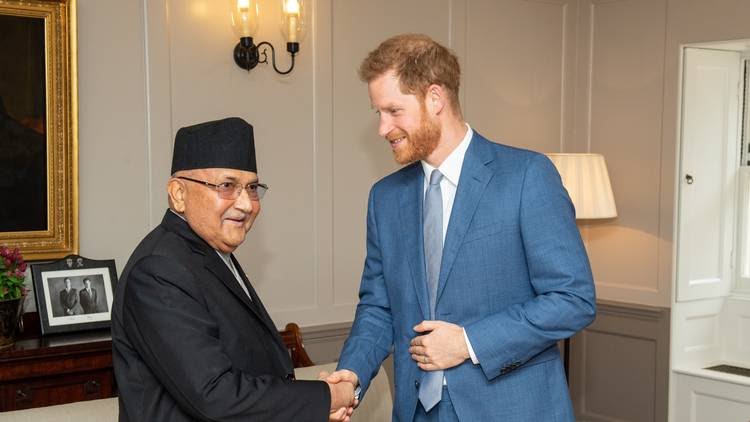 PA(London) — The Duke of Sussex has welcomed the Prime Minister of Nepal, holding an audience with Mr KP Sharma Oli at Kensington Palace.

Harry lived at Kensington Palace, home of the Duke and Duchess of Cambridge and their children, before moving to Frogmore Cottage in Windsor with the Duchess of Sussex ahead of the birth of their son Archie.

On a side table, a monogrammed framed photograph could be seen of Harry, in a smart suit, and Meghan, in a pale blue dress, standing together, with the duchess placing her hand on Harry’s chest.

It featured their signatures underneath, and was also next to a black and white portrait of Harry, minus his beard, and brother William, and one of William and Kate.

KP Sharma Oli was joined by his wife Radhika Shakya for the private audience.

Harry’s official visit to the south-east Asian country three years ago marked the bicentenary of the Nepal-UK relationship.

He also travelled to regions affected by the devastating 2015 earthquake.

He extended his five-day trip to help a disaster response charity rebuild an earthquake-destroyed school, spending an extra six days eating, sleeping and working with Team Rubicon UK volunteers in a remote village.

The duke had long wanted to visit the country due to his admiration and respect for the Gurkha troops he served with in Afghanistan.

He attended a wreath-laying ceremony for fallen Gurkha soldiers at the British Gurkha Camp in Pokhara, Nepal.

He also trekked in the foothills of the Himalayas, spending the night with a Nepalese family in their home in the rural village of Leorani, and watched the sun rise over the mountains.

At a reception hosted by Britain’s Ambassador to Nepal, Richard Morris, at his official residence in Kathmandu, Harry said of his trip: “The people I have met and the beauty of this country make it very hard to leave.”