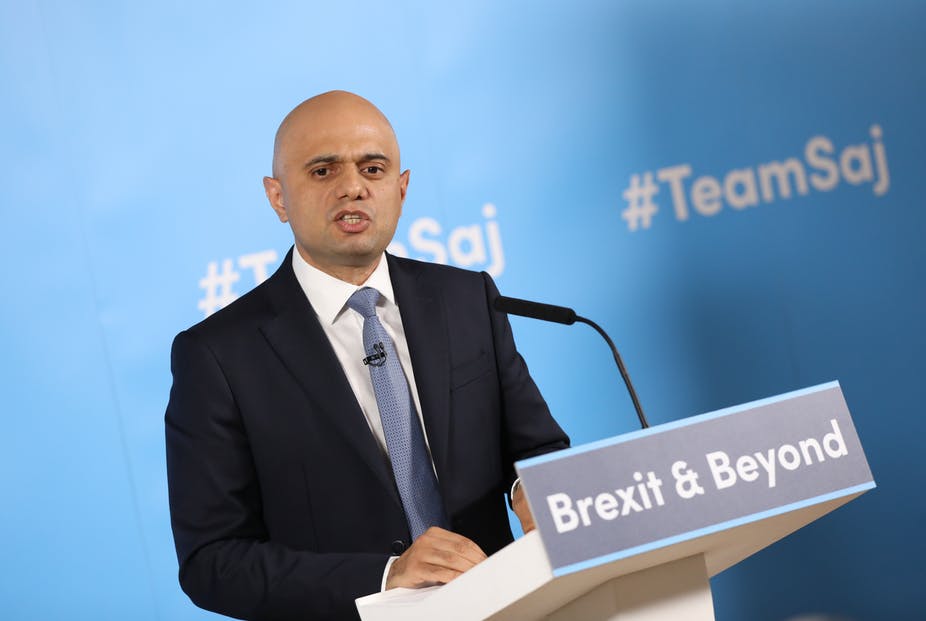 Sajid Javid, the son of Pakistani Muslim immigrants and currently the British home secretary, has positioned himself as the “change”candidate in his bid to become the next leader of the Conservative Party, and de facto prime minister.

It’s been a complicated journey from a boy who faced racism and low expectations at school, to a city trader who made his fortune in banking, to fast rising star in the Conservative Party.

Javid’s official campaign video shows him as a family man. It opens with the husband and father at home with his white British wife, their children and the family’s pet dog. They are a picture perfect portrait of multicultural Britain. It includes a visit to his childhood home in Bristol on what he described as one of Britain’s most dangerous streets, where he previously also that he could have had been drawn into a life of crime. Towards the end of the video, Javid is seen visiting his mother, who is dressed in traditional shalwar kameez, frying pakoras in the kitchen. She allows her son to taste one. Mum’s cooking is the best, he says appreciatively.

I got into politics because I wanted to give back to our country, which has given me so many opportunities. I'm proud to be able to share my story with you. Check out my campaign video and join me at https://t.co/idVRwMVc79 pic.twitter.com/L7cypOHNmA

A deeply personal snapshot of life as the son of immigrant parents, the video emphasises Javid’s non-traditional backstory for someone vying to lead the Conservative Party. It is undoubtedly a “change” not lost on the party membership. Indeed, a YouGov poll of 944 Tory members found that 55% said Javid did not look or sound like a typical Conservative.

Given that Boris Johnson remains the bookies favourite to win by a long margin, it does seem the Conservative Party values familiarity. Johnson (Eton, Oxford, and Bullingdon) won the highest number of votes in the first of ballot of MPs to select their new leader. He is also thought to be the firm favourite among party members, who decide on the final candidate.

Javid dismisses Johnson as “yesterday’s news” but the gap between Johnson’s 114 votes, and the 43received by his nearest rival Jeremy Hunt shows Johnson is very much today’s news. Javid received 23 votes, putting him in fifth position, so while he is not out of the race yet, he remains an outsider.

Javid’s is a text-book example of the British Dreamwhere hard work and application can elevate a boy once living above a shop in a rough neighbourhood into one of the highest offices in the land. Javid would argue that his story shows the power of the individual to rise above circumstances – his small-state, self-reliant philosophy is influenced by the Conservative prime minister, Margaret Thatcher, who he heralds an inspiration and whose picture hangs in his office.

Yet, in his leadership campaign speech he speaks frankly about the issues of racism he has faced throughout his life; from school and his teacher’s expectations about what boys like him should aspire to, his career in banking, and in politics.

Islamophobia in the Conservative Party

Javid has steered clear from talking about Islamaphobia. Johnson, of course, was accused of Islamaphobia in 2018 after he made comments comparing Muslim women in burqas to [“letter boxes” and “bank robbers”]. Neither Javid nor Johnson has commented on the issue in the campaign thus far.

When Javid was not invited to the state banquet held in honour of the US president Donald Trump, even though some more junior ministers were, it lead some to point the finger towards Islamophobia. Javid himself has only commented that he thought it was “odd” and that he did not like it. But others, including the former Conservative Party chair and the first Muslim to be appointed to a cabinet post, Sayeeda Warsi, were quite certain Javid’s background was the reason.

Warsi has been vocal about Islamphobia in the Conservative Party as well as more widely, once claiming that Islamaphobia was socially acceptable and had “passed the dinner-table” test. The Muslim Council of Britain (MCB), an umbrella organisation purporting to represent Britain’s Muslims wrote to the prime minister expressing their concern that Javid’s snub showed that the state was willing to forgo the principals of fairness and equality for all.

Javid has, in the past, opposed the MCB’s calls for an inquiry into Islamaphobia in the Conservative Party, dismissing their claims to represent British Muslims.

Previously, Javid has insisted his party, by the very fact of entertaining him as the home secretary is not Islamophobic. Asked directly whether he thought his Muslim background influenced his omission from the invitation list to Trump’s state banquet, his reply was less than clear: “I am not saying that at all. I really don’t know”.

Javid must be relieved he was not called a “stone cold loser” by the president of the United States, like his fellow son of an immigrant Pakistani Muslim bus driver, the Mayor of London, Sadiq Khan.

On the one hand, Javid appears to be playing up to his roots in both his video and launch speech. On the other, he has refused to engage with the elephant in the room, namely Islamaphobia in the Conservative Party, and, possibly the government pandering to Trumps’s racism at his expense. Maybe Javid is aware that playing on his immigrant Muslim credentials can only take him so far within the Conservative Party. And, it is Conservative MPs and the Party membership which hold his dream of becoming prime minister in their hands. From The Conversation