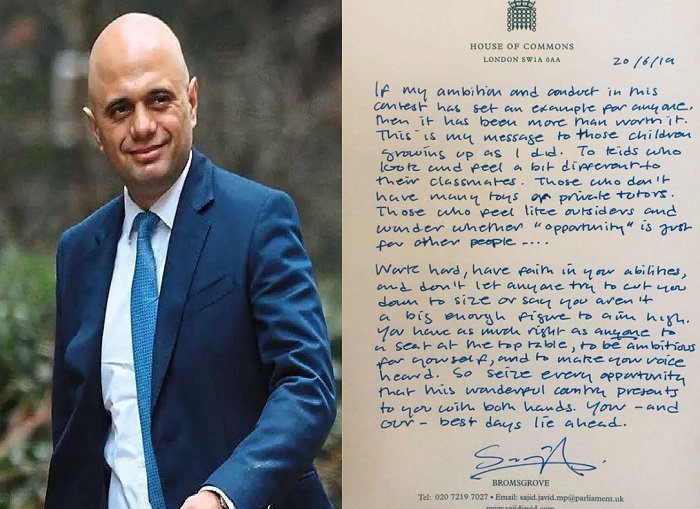 London — A letter from Sajid Javid after his elimination from Tory leadership contest for the PM of the United Kingdom has spread a positive message among the British youngsters born from the immigrant parents.

The letter has been rewetted over 900 times and liked my more than 3k of his followers.

The twitted picture of a handwritten note “to kids like me” saying: “If my ambition and conduct in this contest has set an example for anyone, then it has been more than worth it.” has been popular in Twitter.  among all the kids born and grown up in England from immigrant parents.

If my ambition and conduct in this contest have set an example for anyone. Then it has been more than worth it. This is my message to those children growing up as I did. To tieds who look and feel a bit different to their classmates. Those who don’t have many toys a private tutor. Those who feel little outsiders and wonder whether “Opportunity” is lost for other people …

Work hard, have faith in your ambitions, and don’t let anyone try to cut your dream to size or say you are not a big enough figure to aim high. You have as many rights as anyone to see at me top table to be ambitious for yourself and to make your voice heard. So seize every opportunity that this wonderful country protects to you with both hands. You and our best days lie ahead.

If my ambition and conduct in this contest has set an example for anyone, then it has been more than worth it. My message to kids like me: pic.twitter.com/jaa2cMxM4z

A few days ago a video shared by  Sajid as a competitor of PM with a similar message was also widely watched and appreciated :

Sajid was a son of Pakistani Immigrant parents whose father came to the United Kingdom In 1961 and worked as a bus driver.

He joined the Cabinet as Secretary of State for Culture, Media and Sport in 2014. Two years later he became Home Secretary.

After losing on Thursday he said: “I’m proud to have made the case for being a party that heals division, protects our precious Union, embraces modern Britain and brings Conservative values to new audiences.”