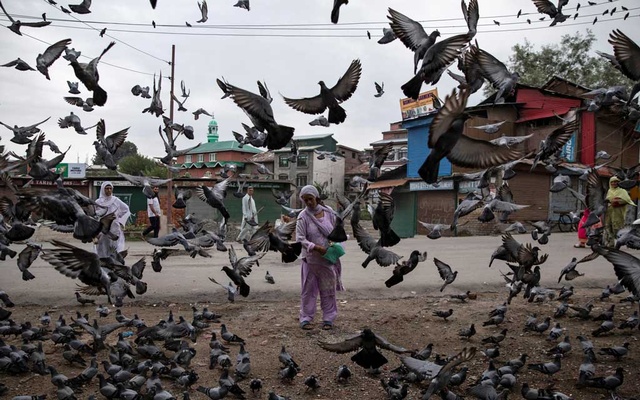 PTI, London: British Kashmiri groups staged protests in the UK against the Indian government’s decision to withdraw the special status of Jammu and Kashmir, even as UK MPs launched tit-for-tat letters to Prime Minister Boris Johnson over the issue.

The “Stop Killing in Kashmir” protest saw a group of anti-India banner-wielding protesters gather outside the Consulate General of India in Birmingham on Friday at a demonstration organised by the Tehreek-e-Kashmir pro-independence outfit.

Meanwhile, a group of British Muslim MPs from the Opposition Labour Party had issued a letter to Johnson demanding that the UK “strongly condemn” the actions of the Indian government as it described the decision to revoke Article 370 as an “orchestrated coup” by India.

The letter calls on the British PM to consider the wider context of the action led by Prime Minister Narendra Modi. It is drafted by UK shadow minister for justice Yasmin Qureshi and signed by eight other mostly Pakistani-origin.

In a counter-attack, Conservative Party MP Bob Blackman hit back with his letter addressed to the British PM on Friday, accusing the Labour Party of breaking from Britain’s long-held position that any matter concerning Kashmir is a “strictly bilateral issue”.

Blackman, the north London MP who has been a long-time supporter of Modi, writes in his letter that as a democratically elected government, the Indian Prime Minister is “perfectly entitled” to implement his party’s election manifesto.

“Constitutional changes are an internal matter for India. There is a widely respected convention that we do not interfere in the domestic affairs of a third country, especially a long-standing friend and ally like India,” he notes.

The Tory MP accused the Opposition MPs of making provocative claims against India which has a long-established tradition of respecting all faiths. The letter attracted support on social media from a wide range of BJP supporters.

Downing Street has not made an official statement on the issue but in a read-out of a telephone conversation between Johnson and Pakistani Prime Minister Imran Khan earlier this week, the situation was referred to as “serious”.

“The leaders discussed the serious situation in Kashmir and agreed on the importance of maintaining dialogue,” the Downing Street statement said.

India has maintained that Jammu and Kashmir is its integral part and the issue of withdrawing special status to the state and its bifurcation are strictly internal to the country.

“We’ve expressed some of our concerns around the situation and called for calm, but also had a clear readout of the situation from the perspective of the Indian government,” said UK foreign secretary Dominic Raab, when asked about the issue during his visit to the US.

In a previous statement, UK’s Foreign and Commonwealth Office (FCO) spokesperson had said the UK was following developments closely and supported calls for the situation to remain calm.

Prime Minister Narendra Modi defended his government’s decision to scrap the special status of Jammu and Kashmir and promised all-round development, early and transparent elections and an end to terrorism there.

“Removal of Article 370 is a reality, and it was a well thought out decision,” Modi said during his address to the nation on Thursday on the situation in Kashmir.