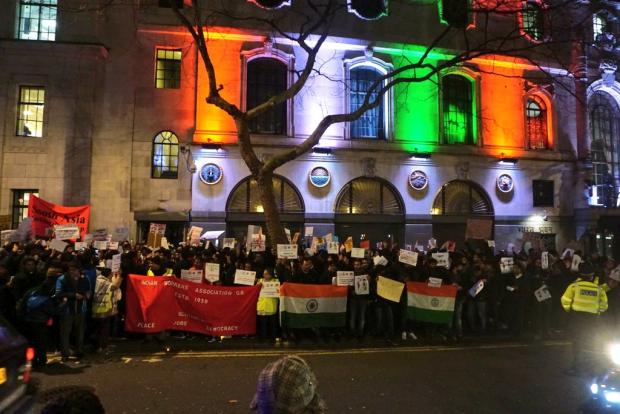 PTI, London — Hundreds of students and other groups gathered around the statue of Mahatma Gandhi at Parliament Square in London on Saturday to protest against the Citizenship Amendment Act (CAA) and the proposed National Register of Citizens (NRC) in India.

The peaceful protest, called with a message to “Defend the Indian Constitution”, brought together a number of UK-based South Asian organisations who chanted slogans of “Azadi” and waved the Indian national flag and placards calling for a withdrawal of the CAA and the NRC.

“We are here to say that we stand in solidarity with Jamia and AMU (Aligarh Muslim University) and all other students and people protesting across India,” said one of the demonstrators.

The demonstration on Saturday follows a series of protests across university campuses in the UK, organised mainly by South Asian societies, during the course of the week.

On Wednesday, several hundreds from around the UK gathered with placards and national flag outside the Indian High Commission in London for one of the largest protests over the issue of the CAA in the UK.

“The Indian High Commission is on one of the busiest streets in central London and we are grateful to the Metropolitan Police officers who worked to allow our peaceful demonstration to go on amid some tough traffic management,” said a spokesperson for the Indian Workers” Association (IWA-GB), an 80-year-old diaspora group.

“The Citizenship Amendment Act (CAA) as it now is, alters the very basis of Indian citizenship, contravenes International law and leaves India’s secular Constitution in tatters by effectively introducing a ”religion test”,” said a statement from South Asia Solidarity, another organisation active in the protests.

The Indian High Commission in London, meanwhile, has been circulating documents laying out the details of the act and stressing that the legislation “does not target any religious community from abroad”.

“It only provides a mechanism for some migrants who may otherwise have been called ”illegal”, depriving them of opportunity, to apply for Indian citizenship, provided they meet certain conditions,” reads an official Indian government CAA brief.