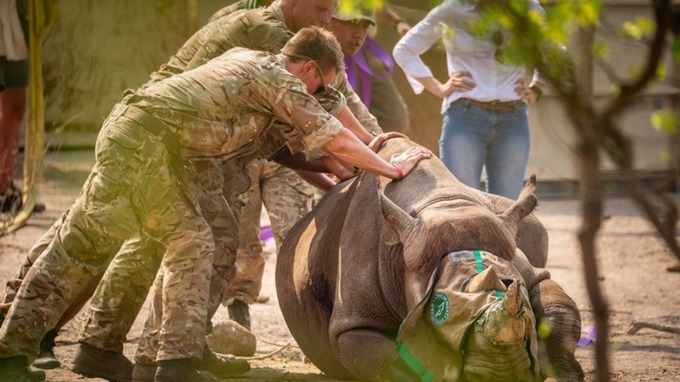 London—British troops, including Gurkha soldiers,  have helped to relocate 17 critically endangered black rhinos from South Africa to Malawi to protect the animals against poaching, reports said.

According to www.itv.com, soldiers from the 2nd Battalion Royal Gurkha Rifles have recently returned home from a three-month counter-poaching deployment in Malawi, in south-eastern Africa.

Based in Liwonde National Park, near the Mozambique border, they worked with the African Parks conservation organisation to train current and new rangers, in a bid to help to crack down on the illegal wildlife trade by improving the effectiveness of patrols, the news report said.

Major Jez England, the officer commanding the British Army counter-poaching team in Liwonde, said the operation had been “hugely successful”.

“Not only do we share skills with the rangers, improving their efficiency and ability to patrol larger areas, but it also provides a unique opportunity for our soldiers to train in a challenging environment”, he told the BBC.

Towards the end of their mission, the Gurkhas helped with one of the largest international rhino translocations to date, offloading the 1.4-tonne animals which had travelled by air and road from KwaZulu-Natal in South Africa.

The British government has committed more than £36m to tackle the illegal wildlife trade between 2014 and 2021.

Part of this is to help support trans-boundary work to allow animals to move more safely between areas and across national borders, officials said.