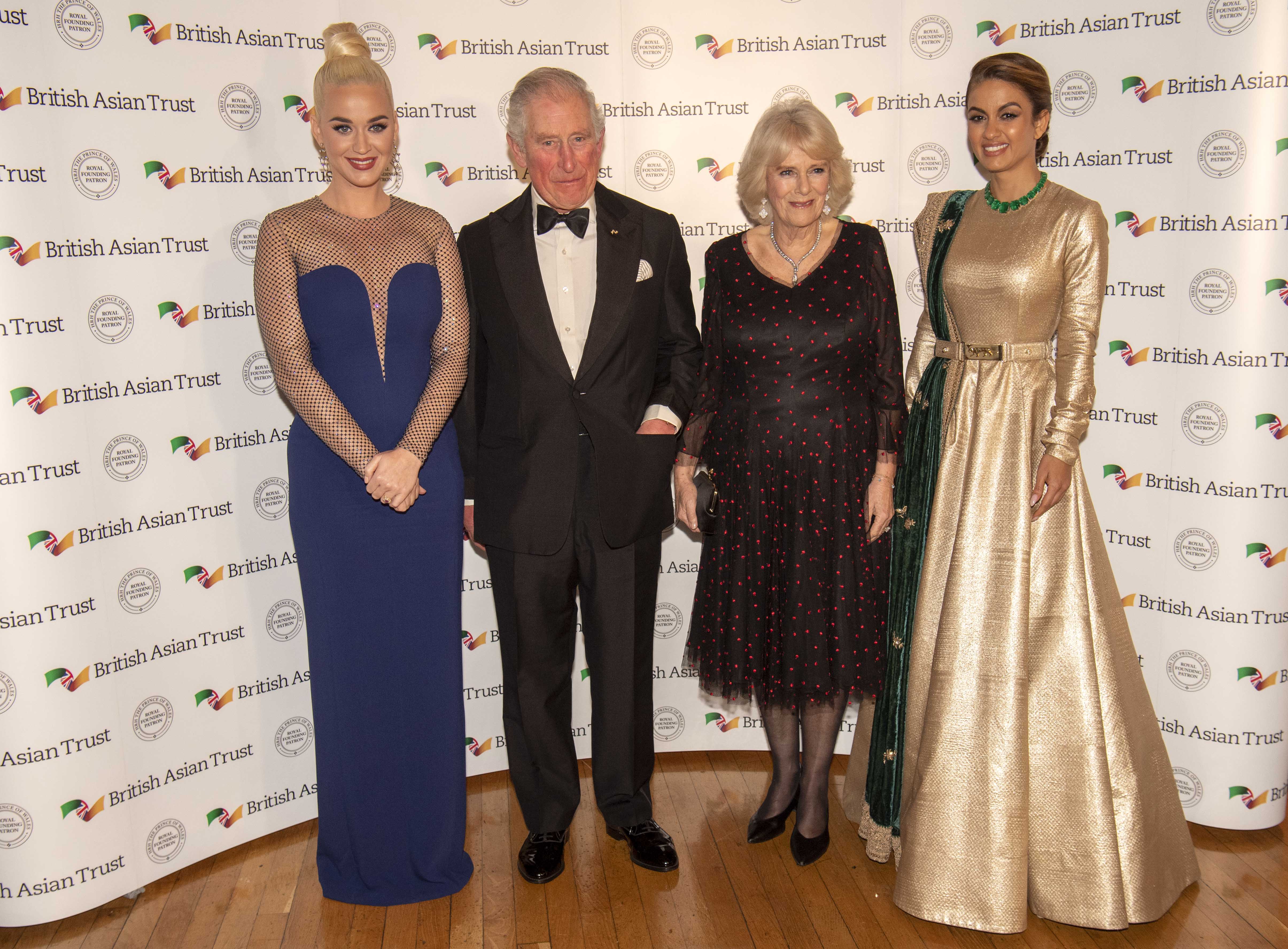 London— HRH The Prince of Wales, Royal Founding Patron of the British Asian Trust, accompanied by HRH  The Duchess of Cornwall, has announced Katy Perryas ambassador of the British Asian Trust’s Children’s Protection Fund for India,as well as Natasha Poonawalla’s multimillion-pound pledge in support of the Fund. It was announced that the Children’s Investment Fund Foundation will match fund everything raised up to £25m.

Prince Charles and The Duchess of Cornwall attended a glittering reception on Tuesday night as part of the charity’s annual dinner at Banqueting  House.

There are believed to be 5.8 million children working in forced labour in India with tens of thousands thought to be working in hazardous workshops in Jaipur alone, producing goods including bangles, embroidery and other products, with many forced to work for up to 15 hours a day. The British Asian Trust has been working with business, government and civil society, to remove child labour from supply chains and encourage child labour free products in markets as part of the Child Labour Free Jaipur Initiative.

As a result of a partnership with the Freedom Fund and the Children’s Investment Fund Foundation, the first conviction resulting in a life sentence for a child trafficker in Jaipur was achieved in 2019 – a hugely significant milestone. Two further life sentences for child labour offenders have followed.

Addressing the gathering, HRH The Prince of Wales, said, “As the world looks increasingly to innovate around sustainable solutions for both people and planet, the British Asian Trust has really established itself as a leading social finance organisation for South Asia. As a result of these efforts, we are now close to launching new and exciting impact bonds in Bangladesh, India and Pakistan.

“As many of you will remember, when we gathered at Buckingham Palace last year, I was able to announce the British Asian Trust’s hugely ambitious intention to raise $100 million over five years. This evening I am even more delighted to tell you that we are making great progress and, thanks to your support, it would not surprise me to see this goal reached in less than five years,” he added.

Here is the full text of HRH The Prince of Wales’s speech:

Katy Perry, global popstar and ambassador of the British Asian Trust, said, “My work as a UNICEF Goodwill Ambassador has taken me to many parts of the world and opened my eyes to the many vulnerabilities of children. India has long held a special place in my heart, and on my last visit, I was able to meet with The Prince of Wales and other leaders in Mumbai, and I was impressed by their strong plan – from on-ground initiatives to fundraising – that will aim to cut child trafficking in half. That is why I am especially honoured to be named an ambassador for the British Asian Trust’s Children’s Protection Fund, and to help shine my light on the work that the British Asian Trust will be doing in South Asia, and to be a part of finding solutions to child trafficking. Children are vulnerable and innocent and have to be protected.”

The reception was attended by supporters of the Trust, senior Cabinet ministers and leading global business leaders. Their Royal Highnesses met with guests including Matt Hancock, Secretary of State for Health; Mohammad Nafees Zakaria, High Commissioner for Pakistan and Saida Muna Tasneem, High Commissioner for Bangladesh.

HRH The Prince of Wales first met with Katy Perry in India in November 2019 at a meeting in Mumbai of British Asian Trust supporters and advisors. Already a champion for children’s rights through her work as a UNICEF Goodwill Ambassador, Katy decided to show her long-term support to the organisation and cause upon learning about the great anti-trafficking work that the British Asian Trust is doing in the country.

Through the British Asian Trust’s work in anti-trafficking, improving livelihoods, education and mental health, it has already touched the lives of 4.8 million people in India, Pakistan and Sri Lanka and has recently expanded its remit into Bangladesh.

The British Asian Trust was founded in 2007 by The Prince of Wales and a group of visionary British Asian business leaders whose original vision and bold innovative principles remain at the heart of its work, seeking to transform more lives across South Asia.

Manoj Badale, Chair of the British Asian Trust said, “We’re delighted to announce Katy Perry as our newest ambassador and are looking forward to working with her on raising awareness of the work we carry out across South Asia. Katy is a keen supporter of our work and her appointment marks another successful year for the British Asian Trust.”