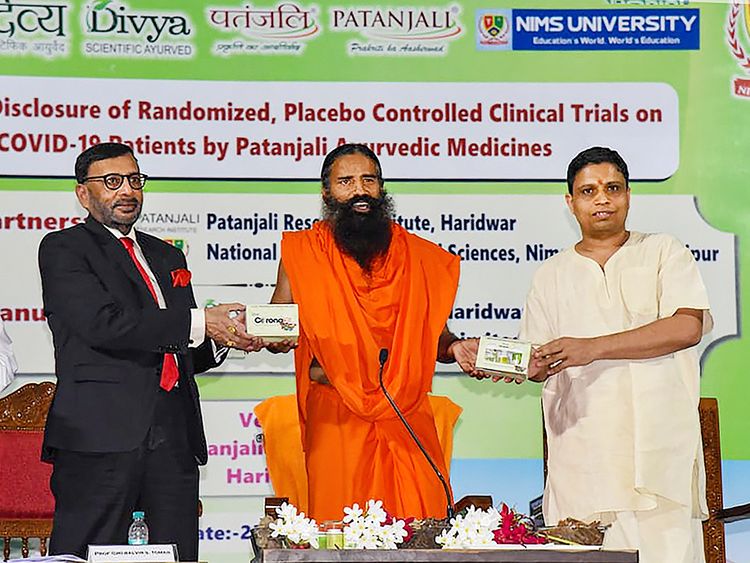 IANS, Jaipur: In another jolt to yoga guru Ramdev, an FIR has been lodged here against him, Patanjali Ayurved CEO Acharya Balkrishna and three others for allegedly making misleading claims that the herbal medicine company has found a cure for COVID-19 called Coronil.

The complaint was filed at Jyoti Nagar police station in Jaipur on Friday.

Patanjali Ayurved, on Tuesday launched Coronil tablet and Swasari vati medicine claiming that they can cure COVID-19 within seven days.

However, the AYUSH ministry expressed unawareness about the development and Patanjali was stopped from advertising the medicine within a few hours after its launch.

Patanjali earlier also claimed that the two Ayurveda-based medicines have shown 100 per cent favourable results during clinical trials on COVID-19 patients except those on a life support system.

The clinical trials were reportedly held in NIMS Jaipur.

Two of the accused including Balbir Singh Tomar and Anurag Tomar, are the chairman and the director of the Jaipur-based NIMS University. The fifth accused, Varshney, is a scientist at Patanjali Ayurved.

Jakhar said the accused have endangered the common people’s lives by making false claims of finding a COVID-19 vaccine as they neither informed the Rajasthan government nor the Centre about the clinical trials of Coronil.

While Ramdev claimed making a thorough clinical case study on patients admitted at NIMS, its Chairman, B.S. Tomar on the other hand said, “No clinical trial in our hospital was made for the drug as there was no serious case of patients admitted. Only 100 asymptomatic patients in our hospital were given a few ayurvedic medicines under the Patanjali banner. We did not ask for medicine to cure coronavirus but had only these ayurvedic immunity boosters who helped recovery of asymptomatic cases faster by 35 per cent.”