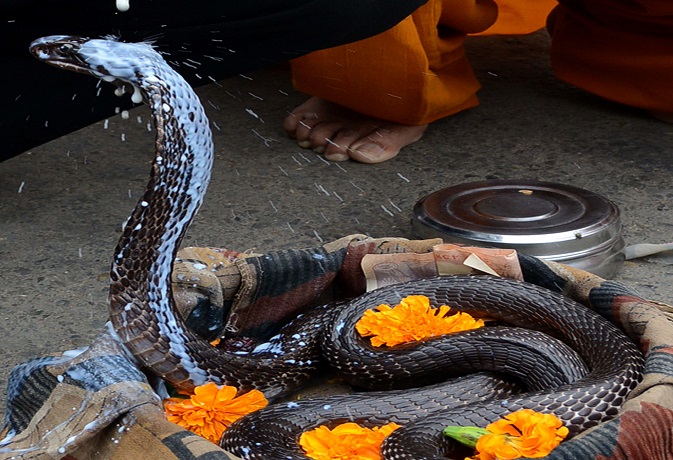 Nag Panchami is a special Hindu festival where people worship snakes. This festival is celebrated each year on the fifth day of the month of Shravana, according to the Hindu lunar calendar. On this day, people worship silver, stone, wood, gold, or bronze statues of snakes. People also worship photos and paintings of mythological snakes or ‘nags’.

Moreover, live snakes are also worshipped by many people. Naga Panchami is an important Hindu festival that is connected to the mythological epic of the Mahabharata and many other ancient myths.

The festival of Nag Panchami is celebrated because there is tremendous rainfall during the month of Shravan. Because of this, during this time, snakes often come out of their burrows because of rain that fills their burrows with water. They can kill humans to save themselves.

To prevent this, the festival of Nag Panchami is celebrated. On this day, snakes are fed with milk. It is believed that snakes have a sharp memory and remember the faces of people who harm them. When the snakes avenge it, they also harm the family members of that person. So to please them, serpents were worshipped on this day.

The role of snakes in our ecosystem

Like all animals in the web of life, snakes play an important role in our ecosystem by maintaining a balance to the food web. Because snakes are both predator and pray, they keep the pest population down by feeding on mice and other small rodents that damage crops and carry disease. Snakes also provide food for larger mammals, birds and even other snakes.

History and mythology behind Naag Panchami

The festival of Nag Panchami began when Takshak, the king of snakes, stalked King Janmejaya’s father Parikshit and killed him. To avenge his death, King Janmejaya conducted a yajna to eliminate the entire Naga species. The day that this yagna was stopped due to the intervention of the Brahmin Astika Rishi was the day of Nag Panchami and since then this day is celebrated for Nag Puja.

According to another legend, Lord Krishna killed Kaliya Nag on Panchami of Shukla Paksha of Saavan month. In this way he had saved the lives of the Gokulvasis. Since then, the festival of Nag Panchami is celebrated every year.

Janmejaya wanted to eliminate all serpents, including the king of snakes, Takshaka. However, the sacrifice was stopped and the snakes/nagas were saved when sage Astika arrived at the sacrificial altar. Astika convinced King Janmejaya to spare the snake king during the Shukla Paksha Panchami day in the month of Shravana. Which is why this day is celebrated as Nag Panchami by Hindus.

Ancient Mesopotamians and Semites believed that snakes were immortal because they could infinitely shed their skin and appear forever youthful, appearing in a fresh guise every time. The Sumerians worshipped a serpent god named Ningishzida. Before the arrival of the Israelites, snake cults were well established in Canaan in the Bronze Age, for archaeologists have uncovered serpent cult objects in Bronze Age strata at several pre-Israelite cities in Canaan: two at Megiddo, one at Gezer, one in the sanctum sanctorum of the Area H temple at Hazor, and two at Shechem.