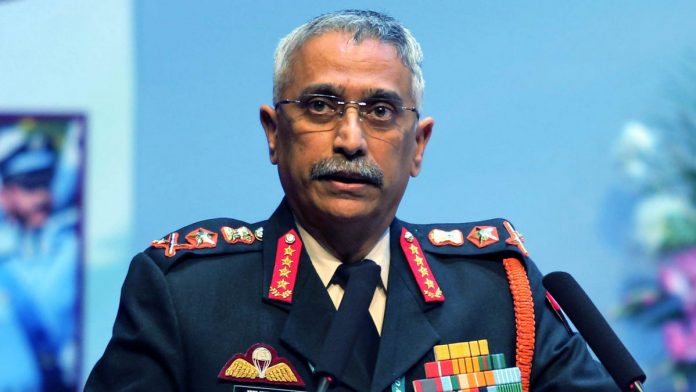 The Chief of Army Staff is scheduled to hold extensive talks with the top civilian and military brass of Nepal including his counterpart General Purna Chandra Thapa on a range of key issues such as further boosting the management of the nearly 1,800 km-long border between the two countries.

“The Chief of Army Staff is scheduled to visit Nepal from November 4 to 6 with an aim to strengthen overall ties including in areas of defence and security,” a highly-placed government source told PTI.

It will be the first high-level visit from India to Kathmandu since the ties between the two neighbours came under strain after the Himalayan nation came up with a new political map in May claiming several areas in Uttarakhand to be part of its territory.

India’s decision to send the Army Chief to Nepal to reset the ties is seen as part of a larger exercise by New Delhi to rejuvenate relations with Myanmar, the Maldives, Bangladesh, Sri Lanka, Bhutan and Afghanistan in the wake of greater efforts by China to expand its influence in the region,

Earlier this month, Gen Naravane travelled to Myanmar along with Foreign Secretary Harsh Vardhan Shringla on a very crucial visit during which India decided to supply an attack submarine to the Myanmarese Navy besides agreeing to further deepen military and defence ties.

Nepal is important for India in the context of its overall strategic interests in the region, and leaders of the two countries have often noted the age-old Roti-Beti’ relationship.

Land-locked Nepal relies heavily on India for the transportation of goods and services. Nepal’s access to the sea is through India, and it imports a predominant proportion of its requirements from and through India.

According to official data, Nepal’s imports from India in 2017 were worth USD 6.52 billion while its exports to the country were pegged at USD 420.18 million.

The figure for China, which was second on the list of countries from which Nepal imported its requirements, was five times lower than that of India.

On the security side, India’s strategic thinkers are concerned over reports of China grabbing Nepalese territories in a number of locations along the borders between the two countries, though Kathmandu had clarified recently that there were no such encroachments.

“According to reports, Beijing is fast moving forward and further pushing Nepali boundaries by encroaching more and more landmass. The actual scenario could be worse as the ruling Nepali Communist Party (NCP) is trying to shield the expansionist agenda of the Chinese Communist Party (CCP),” said an expert on the condition of anonymity.

It is learnt that India is for expanding overall ties with Kathmandu provided its security interests are protected.

The ties between the two countries came under strain after Defence Minister Rajnath Singh inaugurated an 80-km-long strategically crucial road connecting the Lipulekh pass with Dharchula in Uttarakhand on May 8.

Nepal protested the inauguration of the road claiming that it passed through its territory. Days later, Nepal came out with the new map showing Lipulekh, Kalapani and Limpiyadhura as its territories.

In the midst of the row, Gen Naravane said that there were reasons to believe that Nepal objected to the road at the behest of “someone else”, in an apparent reference to a possible role by China in the matter. The comments triggered angry reactions from Nepal.

India too had published a new map in November 2019 showing the areas as its territories.

After Nepal released the map, India reacted sharply, calling it a “unilateral act” and cautioning Kathmandu that such “artificial enlargement” of territorial claims will not be acceptable to it.

In June, Nepal’s Parliament approved the new political map of the country featuring areas which India maintains belong to it.

In its reaction after Nepal’s lower house of parliament approved the bill, India termed as untenable the “artificial enlargement” of territorial claims by the neighbouring country.

India said Nepal’s action violates an understanding reached between the two countries to resolve the boundary issues through talks.

Nepalese Prime Minister K P Sharma Oli has been asserting that Lipulekh, Kalapani and Limpiyadhura belong to Nepal and vowed to “reclaim” them from India.

The Lipulekh pass is a far western point near Kalapani, a disputed border area between Nepal and India.

Both India and Nepal claim Kalapani as an integral part of their territory – India as part of Uttarakhand’s Pithoragarh district and Nepal as part of Dharchula district.