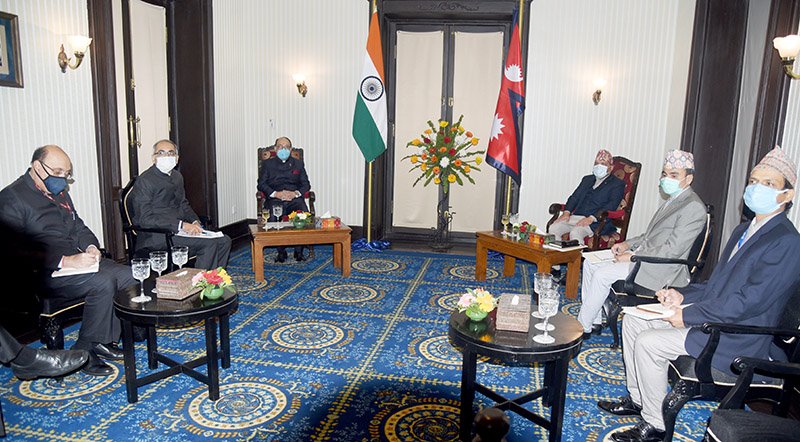 Kathmandu–Nepal and India have discussed issues related to boundary between them and exchanged views on completing the boundary work.

On the first day of his visit, secretary of External Affairs Ministry of India, Shringla had held discussions and meetings with his Nepali counterpart Bharat Raj Paudyal and called on President Bidya Devi Bhandari and Prime Minister K.P. Sharma Oli and Foreign Minister Pradeep Kumar Gyawali.

The meetings were conducted in a cordial and positive atmosphere, according to a press release of the Embassy of India in Nepal issued on Thursday, The countries National daily Rising Nepal writes.

“In their meeting, the two Foreign Secretaries discussed and reviewed various aspects of the bilateral ties between the two countries. They expressed satisfaction at the substantial progress made in different sectors of cooperation despite the constraints of the pandemic. The Nepali side appreciated Indian Government’s active facilitation in ensuring smooth and unhindered cross-border flow of trade and commerce and active implementation of development projects during this time,” read the press release.

They also discussed the boundary matters and exchanged views on completing the boundary work in the remaining segments. The two Foreign Secretaries agreed to maintain the renewed momentum in high-level bilateral engagements and to further strengthen the traditionally close, friendly and multifaceted partnership between the two countries, said the Indian embassy.

Indian foreign secretary called on President Bidya Devi Bhandari and conveyed greetings on behalf of the President of India. They discussed the close relationship between both countries and ways to further strengthen it, according to the press release.

The Indian embassy said that the Indian foreign secretary underscored the consensus between both sides to maintain the momentum in bilateral engagements; strengthen people-to-people linkages, make tangible progress on substantive and strategic bilateral initiatives and issues of mutual interest.

The Indian foreign secretary ‘had a useful exchange of views on enhancing the bilateral relationship and the next steps to be taken in maintaining the trajectory of exchanges and cooperation’ during his meeting with Foreign Miniser Gyawali. He also ‘conveyed an invitation, from External Affairs Minister Dr S Jaishankar, to Hon’ble Foreign Minister Pradeep Gyawali to visit India for the next Joint Commission Meeting’.