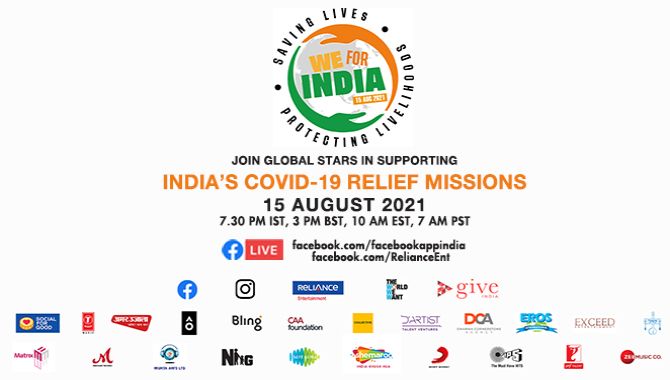 London, UK / Mumbai, India —  Over 100 major stars and icons from the world of film, music, comedy, and sports, will join a unique three-hour virtual fundraiser, We For India: Saving Lives, Protecting Livelihoods, to broadcast on Facebook on India’s Independence Day, Sunday 15th August 2021 at 7:30 PM IST / 3:00pm BST / 10:00am EDT.

The celebrity guests (full list below) will unite to express solidarity and support for saving lives and livelihoods in India after the devastation caused by the second wave of the pandemic. All proceeds from the mega event will be utilised by GiveIndia, India’s largest and most trusted giving platform, to provide both humanitarian aid and to strengthen the medical infrastructure. The event acts as a unique opportunity to use the power of entertainment to inspire, empower, and mobilise global public support to donate funds in real-time and address the significantsocial-economic impact of the pandemic.

We For India will feature engaging content, including video messages of support from A-List stars, stand-up comedy and musical performances, interactions with frontline heroes, immersive fitness challenges, hilarious games, and more,streamed to homes as the world joins hands in solidarity and unity with the people of India. Some of the prominent international names confirmed to support the broadcast include:

Proceeds from the event will be utilized to provide critical facilities such as oxygen concentrators, cylinders, ventilators, and essential medicines as well as ICU units. Funds will also go towards supporting the staffing of vaccination centers. Funds will also be mobilized to support long-term public recovery and rebuild livelihoods such as those thrust into poverty due to a decline in earnings and complete loss of income. Humanitarian efforts in the form of meal and ration kits will be provided to the rural and urban families hit financially by the pandemic. Cash relief will be provided to families who have lost an immediate member.

With its focus on not only saving lives but protecting livelihoods, We For India is an initiative conceptualised by global social impact enterprise The World We Want. It is produced in partnership with leading media and entertainment company Reliance Entertainment. Funds will be generated and further allocated across post Covid-19 relevant causes by GiveIndia, India’s most trusted online donation platform.

The global videothon will be live on Facebook (www.facebook.com/Facebookindiapp) on Sunday, August 15 at 7:30 PM IST / 3:00pm BST / 10:00am EDT and provides an opportunity for viewers to also donate in real time to this worthy cause.

List of Artists / Individuals participating in the ‘WE FOR INDIA’ concert in Alphabetical Order: