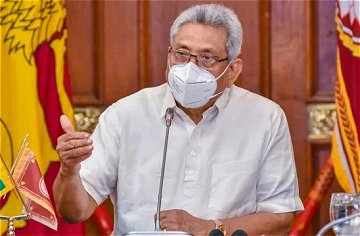 Colombo, PTI— Sri Lankan President Gotabaya Rajapaksa has warned of the consequences the public will need to face if a longer lockdown is enforced as he ordered a 10-day nationwide shutdown to combat the spike in coronavirus cases.

In a televised address to the nation on Friday, Rajapaksa said he agreed to enforce a brief lockdown from 10 pm till 4 am on August 30, however, if a longer shutdown is enforced in future then the public will need to be prepared to make sacrifices.

“At this crucial juncture, everyone should take the country forward strategically by acknowledging the gravity of the situation,” he said.

Rajapaksa also underlined that a lockdown will damage the country’s economy, including the tourism sector which is trying to revive.

The president had earlier refused to heed to calls of a lockdown by medics as coronavirus infections overwhelmed hospitals, morgues and crematoriums, arguing that closing down the country will badly impact the island’s fragile economy.

However, he was compelled to relent as the powerful Buddhist clergy and his own political alliance members demanded the lockdown in view of the grave situation facing the island nation.

The pressure mounted as the death toll in the ongoing third wave surged to unmanageable levels with the health sector having to cope over its capacity. The morgues had bodies piled up waiting to be cremated. The death toll on Friday was a record with 195 fatalities, along with 3,839 new infections.

According to official figures, as on Saturday, a total of 6,985 people died of the virus, while 381,812 have been infected.

Rajapaksa noted that a majority of COVID-19 deaths are of unvaccinated people over the age of 60 with chronic ailments.

Health experts say the Western province with the capital district of Colombo was the worst hit. Over 75 per cent of the cases in Colombo were from the rapidly spreading Delta variant.

This is the first time since mid-June that the country has re-imposed a lockdown. The ongoing third wave of infections is blamed on the traditional Sinhala and Tamil New Year celebrations held in mid-April.

The stepped up vaccination drive was another reason why the government was not keen on re-imposing a lockdown. Over 5 million out of the 21 million population have been given two doses of a vaccine.

Asserting that vaccination is the primary solution to contain the pandemic, the president recalled his personal appeals made to world leaders to secure consignments of vaccines to inoculate Lankan population.

All these efforts were made because I wanted to vaccinate all the people of our country. As a result of this effort, the country is now receiving a large number of vaccines,” he said, underlining that Lanka was among the countries with the highest vaccination rate in the world.

Lanka, which has witnessed a series of lockdowns and curfews to contain the spread of COVID-19 in the country, has been impacted in terms of its economy. The tourism sector, which generates a huge quantum of revenue for the island nation, has seen a drastic fall.