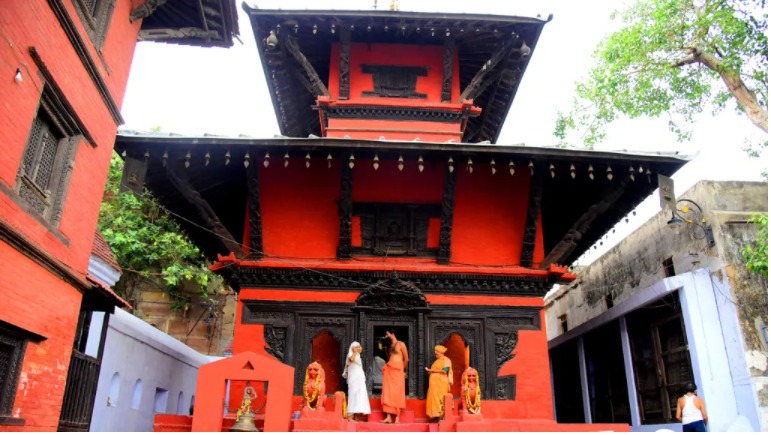 VARANASI: Shri Samrajeswar Pashupatinath Temple in holy city of Varanasi which stood as a symbol of India-Nepal Unity is attracting scores of tourists and pilgrims after the development of Kashi Vishwanath Temple.

Varanasi is one of the oldest living cities in the world and is amongst the most important pilgrimages for Hindus. The massive corridor around the famous Kashi Vishwanath Temple, which opened last December, has given a boost to tourism in the holy city.

Since the inauguration of first phase of Kashi Vishwanath project, devotees have begun to come in large numbers and one no longer has to crane one’s neck to see the famous temples.

It is also known as the Nepali Mandir and Mini Khajuraho. Dedicated to the Lord Shiva, this temple has great religious importance. Constructed in the 19th century A.D by the King of Nepal, the temple is a replica of the Pashupatinath Temple in Kathmandu.

Worship is being done on the daily basis and devotees visiting the temple feel joyous. The people from Himalayan nation Nepal visit the temple regularly and they have great devotion for Kashi and its people.

“Those who come to Varanasi to pray in the Kashi Vishwanath Temple, they definitely pay a visit to Nepali temple. A longue queue could be seen after 3 pm every day,” says Arvind Mishra, one of the devotees.

Shiva Gautam, a devotee from Nepal, says, “The temple resembles the same as Pashupatinath temple of Kathmandu all those who come from Nepal surely visit the temple.”

Nepali temple is a bond between two countries with similar cultures and religions. A major attraction among the art enthusiasts, the temple stands with pride today.

The Kashi Vishwanath Temple corridor has made Varanasi a delightful place of interest for pilgrims across India and Nepal. Prime Minister Narendra Modi earlier had noted that the temple area was only 3,000 square feet which has now enlarged to about 5 lakh square feet. Now 50,000 to 75,000 devotees can visit the temple and temple premises.

The corridor which combines history with future is helping in bringing both the neigboring countries closer which share a unique relationship characterised by deep-rooted people–to–people contacts of kinship and culture.

Notably, Nepalese Prime Minister Sher Bahadur Deuba will visit Varanasi during his official visit to India from April 1 to 3.

As per the itinerary, Deuba will meet Prime Minister Modi on April 2.

This will be his first visit to India after becoming Prime Minister of the Himalayan nation in July 2021. He has visited India in each of his four earlier stints as PM. His last visit to India was in 2017.

This visit is a part of the tradition of periodic high-level exchanges between the two countries.

It would give an opportunity to both sides to review the entire gamut of bilateral relations including development and economic partnership, trade, cooperation in the health sector, power, connectivity, people to people links and other issues of mutual interest. (ANI)